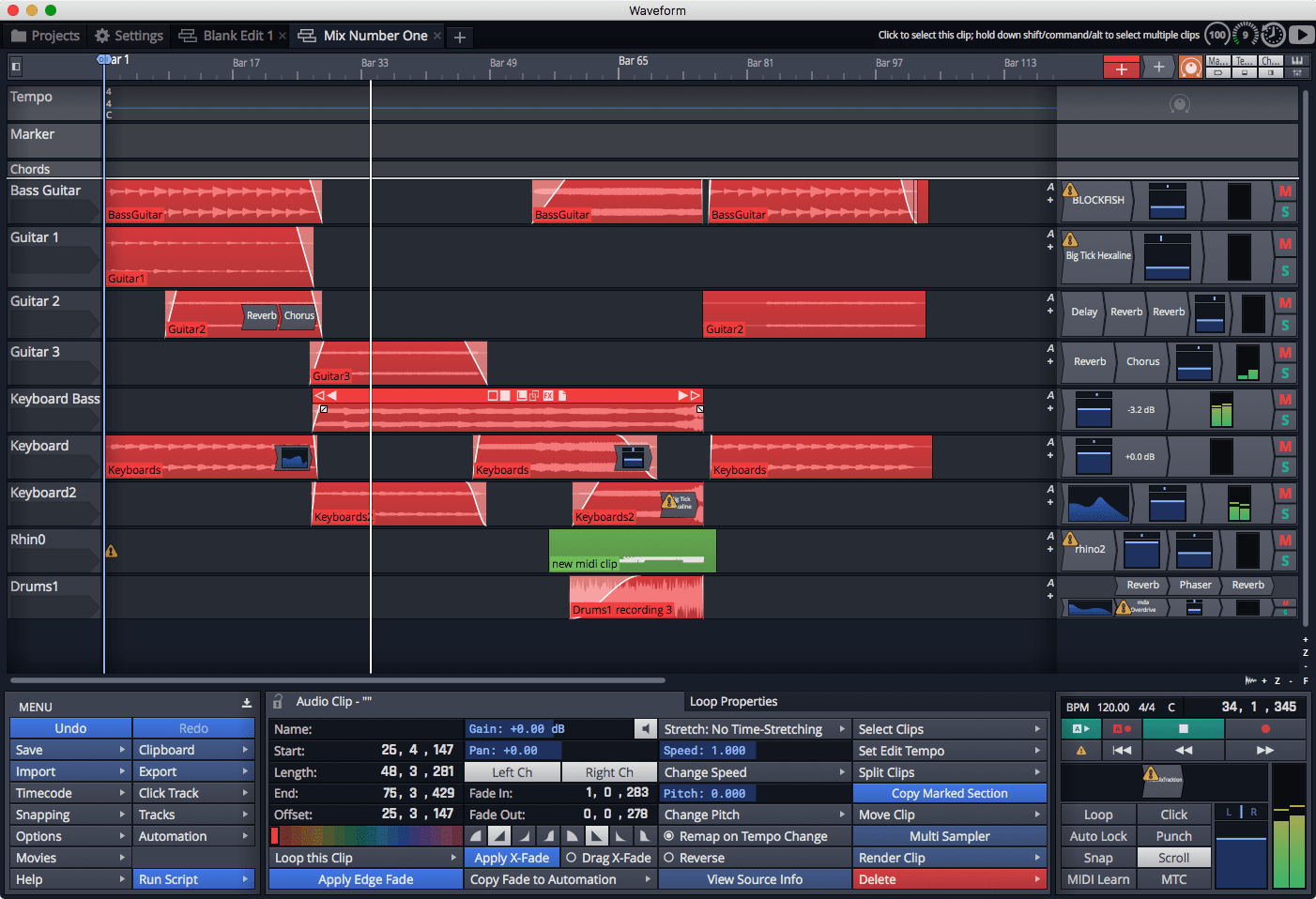 My first track in Tracktion, ~2002 with same later version messing around. How quaint!

I’m done with my Waveform Review. So now it’s time for me to publish my final thoughts about the product. I don’t want to spoil anything so you’ll have to click in to the post (this isn’t a ploy for ad views, I don’t have ads. It’s just easier for me to write the post this way).

I also updated the DAW Chart with Waveform. As of writing this post, I have no idea what the total score is. I input my ratings from my notes. When this post is published, I will be as surprised as you to find out how it fares on the chart.

Let’s start with some history here.

I started recording music on computers in the early 90s. Somewhere around 1992 iirc. I was a huge fan of the capability and the future of the technology. It was limited, it sounded pretty garbage, but it was exciting.

I used various systems from Digidesign’s offerings to eventually SAW (and a 2 year stint with Samplitude). I used various products on the side as well. I have always loved digital audio technology and I was constantly trying every product. There were periods where I only used Cubase VST or N-Track and…

Around 2002 I found Tracktion and I was in love with it. It wasn’t feature packed but it was unique and the community was amazing. Constant releases. Excitement about how to use it. Jules (the author at the time) was always talking to users about the software. Tracktion was simple and it was a pure joy to use to do simple recording.

I think that without question, SAWStudio in the late 90s early 00s and Tracktion in the early-to-mid 00s were the most exciting products. The developers of those 2 softwares had very specific design goals, and they were unrelenting about them. If your needs fell in line with those design goals then it was basically like joining a cult, but a really fun party cult. There was a clear leader in the community and the users were ready to follow.

SAWStudio slowly slowed development and its core design goals have been surpassed by other products. Mackie purchased Tracktion and Tracktion 3 came out… which IMO was a total disaster. It was a lot of features nobody really asked for. Development slowed, users left for other products (Energy XT was a big one) and the death of Tracktion was imminent. After T3’s release I sold my license and didn’t look back. Clearly Tracktion was dead.

In 2013 TSC took back Tracktion from Mackie and development ramped up again. 5 versions later and here we are again.

I e-mailed TSC and asked for an NFR (not-for-resale) review copy. I very rarely do this. It’s actually the first time I’ve ever asked for an NFR of a product, rather than being offered it. All of my product reviews so far are paid copies except for Mixbus (I was offered a license) and Waveform (I asked for a license).

I spent 42 days on this review. In total I spent 87 hours screenshoting, testing, writing and organizing. I spent 267 hours in Waveform 9 in those 42 days. My face was damn near glued to it when the sun was out. I mixed 16 songs (totally just over 3,100 tracks). I setup audio for 5 lessons. I did session work for 12 artists.

Sadly I was unable to do everything I wanted in Waveform 9. The biggest flaw for my general work is the inability to easily edit multitrack recordings, such as live drums or complex guitar recordings. I had to dump tracks out to Reaper (and sometimes Studio One) to get things done. When I wanted to check bugs/behaviour of Waveform I usually used Ardour as my reference.

Utilizing the Waveform community at KVR is nothing like it was in the ‘old days’. In 2004 or so, the Tracktion forum alone was nearly as busy as every other forum combined on KVR at some points. In 2018 it’s pretty slow. There’s maybe 5-10 posts a day, and very slowly going. That does reduce a bit of the generated excitement that used to drive me a bit. I greatly enjoy having an enthusiastic community, since it helps reinforce you on the days when you become frustrated with the product. Despite the lack of posts, the people there are very helpful, polite and the developers post frequently.

Waveform’s developers seem to fall mostly in to the ‘concerned about their users’ category. They respond to bug reports. They fix bugs pretty fast. They discuss feature requests or acknowledge that they saw them. They care. It’s nice to see. That’s not to say they lack other qualities, however to the average user I think that is the most noticeable quality.

Despite some of my frustrations with Waveform (and honestly, there was a lot of them), I really enjoyed using it. It was simply fun to use. I don’t think that I could personally use it for day to day work. I am much happier using Ardour, Digital Performer or Reaper for that (and keep in mind it’s not a cost issue. I own basically every DAW). Waveform is simply fun though. The annoying things that switch your brain from musician to engineer are mitigated in Waveform. You can coast along without having that cognitive explosion when you need to switch to troubleshooting or ‘engineer-mode’.

So halfway through my review I bought Waveform+. I actually like a couple of the DAW Essentials plugins enough that I wanted to have them to use in other products. I was also now have Biotek. (Waveform Ultimate).

So what is the take away from this wall of text?

I’ll be featuring Waveform articles on my site and similar content for the foreseeable future. Much like I have Reaper content on my site (as it is my main DAW), I’ll see what I can do to increase the amount of community created content for Waveform.

What I will cease using is Renoise. Renoise has been my primary personal creation platform for many years. Development has stalled, and there’s a frustrating lack of certain features that ruin the creative process for me. I’ve outgrown it, and I’ve needed something new for a while. I tried Bitwig for this purpose and it didn’t work out for me. I also tried to do my personal experimental projects in Digital Performer and that was a disaster to me.

It’s not the most capable DAW out there, but if it provides enough functionality for you then it is a pleasantly fluid experience. It’s also packed with unique features that are more than marketing gimmicks (but let’s be real, there are a few marketing gimmicks in there. The devs do have to create hype and pay for bread).

EDIT - Any mention of Ardour implies Mixbus as well.

I’m adding Waveform to my arsenal. Replacing Renoise. Will add more Waveform content to this site over time.

This series took 89 hours to write, research, edit and screenshot. It took 356 hours total to put together including time using the software. (8 hours a day for 42 days straight!) If you appreciate the information presented then please consider joining patreon or donating!

«  Waveform: the good, the bad, the weird. - Version 9.1.1, Part 9: Instruments and Effect Review Axiom Sound Samples »
If you appreciate the information presented then please consider joining patreon or donating money/time