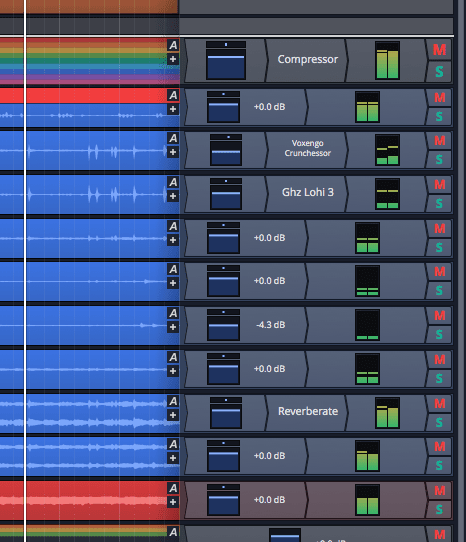 The right side mixer

I’m going with a different format this time. Each post will cover at least one of the following categories: good, bad and weird. Each category may have more than one entry. If all goes well then the ‘good’ section will have multiple entries each time, and maybe there’ll be a post with no Bad section?

I love Korean cinema (and kdramas). One of my favorite films is 좋은 놈, 나쁜 놈, 이상한 놈, aka “The Good, the Bad, the Weird”. I highly suggest watching it. Even if you don’t like subtitles, I think it may be capable of swaying you. That’s where the idea for this review format came from.

So let’s get on with it!

VERSION - This review is (hopefully) accurate as of Waveform 9.1.1 Further versions may obsolete these views.

Waveform’s browser section is pretty alright. It has the features you’d expect of a loop browser like syncing to project tempo, looping preview, alternate output, project sync (retrigger on play) and auto-play.

I like mixing in Waveform as a matter of how the GUI operates. On the right hand you have a list of all of your plugins.

Everything is always present. If your track starts to have a lot of plugins, then you can resize the panel to allow more room as necessary.

The upside of this as well is that you can place faders and meters at any point in the signal path. If you want pre-fader metering then just put the meter before the fader. If you want meters between every plugin then do that! If you read my gainstaging article then you might very well be excited by this possibility.

I’m very fond of the process of mixing in Tracktion when it comes to simple adjustments and organization of processors.

There’s few Waveform features that are as iconic as Racks.

A ‘Rack’ is a container for plugins that allows modular routing. In the image above I have 2 midi shifters that add an octave and a perfect fifth going in to Hive (this gives me root, fifth, octave). After Hive there’s a multiband split at 600hz. Then there’s a Fabfilter Pro-R on the high end, and one on the low-end. That rack is very simple.

Racks offer a lot more than just simple routing. Any track can feed an input. Racks are ‘track agnostic’, so a rack can be fed from multiple tracks or have multiple track inputs, and these inputs can feed plugin I/O or sidechains. A single rack instance can be put on multiple channels for easy access too. It gets really crazy if you want it to. You can think of Racks as global FX containers Their place on a track only determines the track input point i.e. where in the signal path that the rack takes input from.

Racks have multiple outputs as well. A single rack can feed multiple tracks. This allows you to have a single setup that splits out to various tracks, for instance my multiband reverb patch above could have fed to a ‘Reverb High’ and ‘Reverb Low’ track if I wanted. This works with multi-output instruments too.

There is a ‘stack editor’ mode. I find this to be mostly useless. It makes it easy to create serial connections where plugin->plugin 2->plugin 3 are inserted in to the rack and automatically connected. I suppose this is useful if you want to use a rack as a ‘plugin container’ of sorts, but with no parallel paths. If you want to use any of the cool features then you must be in the ‘Rack Editor’ mode. (Edit: Check out this post here for some more information. I’ll cover this later when I get to another feature…)

Racks also have the Macro facility built in so you can create control macro for complex parameters, but this hasn’t been covered yet. We’ll get to this in another post.

A neat feature is that VST racks can have a control selected as the ‘quick control’ that shows on the plugin’s block. This allows you to access a single parameter quickly without bringing up the GUI.

Racks can be saved as presets, which is obviously helpful when you create some massive monster.

I found no way to automatically connect I/O between plugins. I found that bothersome especially on stereo plugins. I/O on multiple tracks is always set to fully parallel, so you are forced to nearly always undo this manually and re-route it. More automatic routing shortcuts/options would be great. The clicking and dragging becomes tiresome quickly.

Racks can be put on audio clips, but they don’t add any I/O. I can’t figure out how to utilize clip based racks since there’s no ‘clip Input’ or ‘clip Output’ to use. Racks can not be put on midi clips.

Racks do not have ‘control signals’. You can not route automation data or modulation Data. You can add Modifiers to racks, but not inside of racks, which is unfortunate and confusing when you have a single rack across your project. Modifiers live on tracks, so if you delete the track with the modifier then all of your racks are affected. I will discuss modfiers in a later post, but they are a way to modulate parameters outside of automation. The implication of having no control signals is that affecting changes beyond what’s written is impossible. Slight adjustments must be made at the source, and there’s no ‘modulation of modulation’.

Later I’ll discuss why I dislike Waveform’s VCAs, but there is a workaround involving racks.

Essentially you can have a global object that contains specified I/O points for certain tracks. You can then link parameters of child objects. 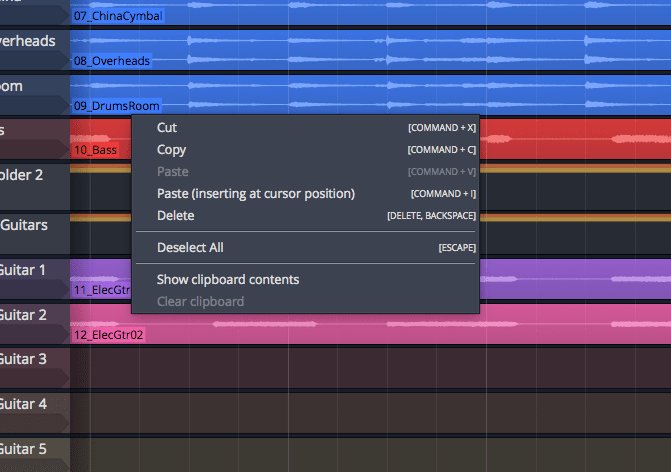 If you do not rely on native capabilities of your OS or Window Manager to interact with programs, such as text editing shortcuts, window management shortcuts, native shortcut assignment or application scripting… then this section is totally irrelevant to you. You can just skip ahead and realize that Waveform exists entirely in its own window and doesn’t care what your OS is. For many people that’s actually a great feature. This is a negative to me.

Everything in Waveform is in its own window, using its own graphics. There aren’t any menus via your OS, there isn’t a menu bar, there isn’t any native OS integration… It’s all the way Waveform wants it.

That presents a number of problems.

I realize that these things don’t matter for many people. If you ‘live’ inside Waveform then it’s certainly not going to be an issue. I am an emacs user after all, so I can understand the idea of living in a weird non-native ecosystem.

The problem is when you begin to realize that you need to basically relearn how to use a computer to interact with Waveform. Many of the things that you expect to work may not work if you know how to use your OS or Window manager well.

However if you aren’t an ‘expert’ in your native environment then this may actually be a bonus for you. Such is the duality of life.

The mixer is a work in progress...

You may have already read that I like mixing in Waveform so it may be a surprise that I think the mixer is pretty awful.

Waveform 9 introduced a mixer, which is strange if you know the history of Tracktion. I recall very clearly that the original author of Tracktion said that tracktion would never have a traditional mixer. Here we are in 2018, and it does.

The mixer is not particularly useful though. There’s many issues with it that I’ve found make it a less exciting prospect than using the right hand panel:

Mixing in Waveform has some omissions that can make it infuriating to work with. 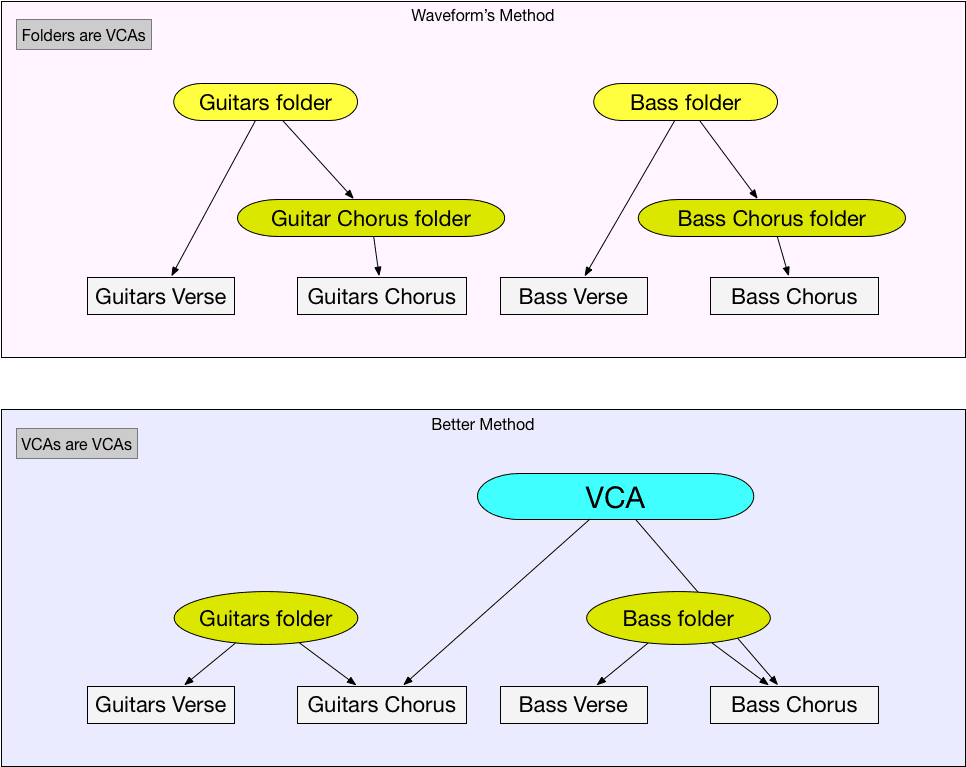 VCAs are one of my favorite things to use for mixing. I’ve explained VCAs once or twice before. So go read those first if you don’t ‘get it’.

One issue with Waveform is that VCAs are implemented as track folders. That means that you can only control direct children of folders. If you want to control multiple tracks that aren’t part of the same hierarchy then you are out of luck. In the image above I want to have a VCA that controls the parts of the track in the chorus, but in Waveform that requires that you have sub-folders for every folder and you must manually adjust each VCA alone.

A better approach is that VCAs are assignable directly to tracks. This would allow a VCA to control anything at any place in the signal path.

The next issue with VCAs is: What do they control?! If you have multiple volume&pan plugins on your track then it controls all of them! That’s not always what you want, especially since one of the benefits is that VCAs affect volume before post-fader sends. What if you want to have some gainstaging control after your post-fader plugin? Too bad. This becomes even more of an issue in the mixer where the fader only affects the last volume&pan on a track but if you adjust a VCA fader on a folder track then it affects all of the volume&pan instances. This is very confusing.

The better behaviour would be that there’s a VCA filter or track that can be assigned to specific volume&pan instances.

As it stands I’m not sure that I can figure out a workflow that benefits from Waveform’s current VCA implementation. This is especially apparent when you use the mixer and the behaviour between normal tracks and folder tracks differs.

These issues can be worked around by using plugin racks, but that’s a lot of work sometimes.