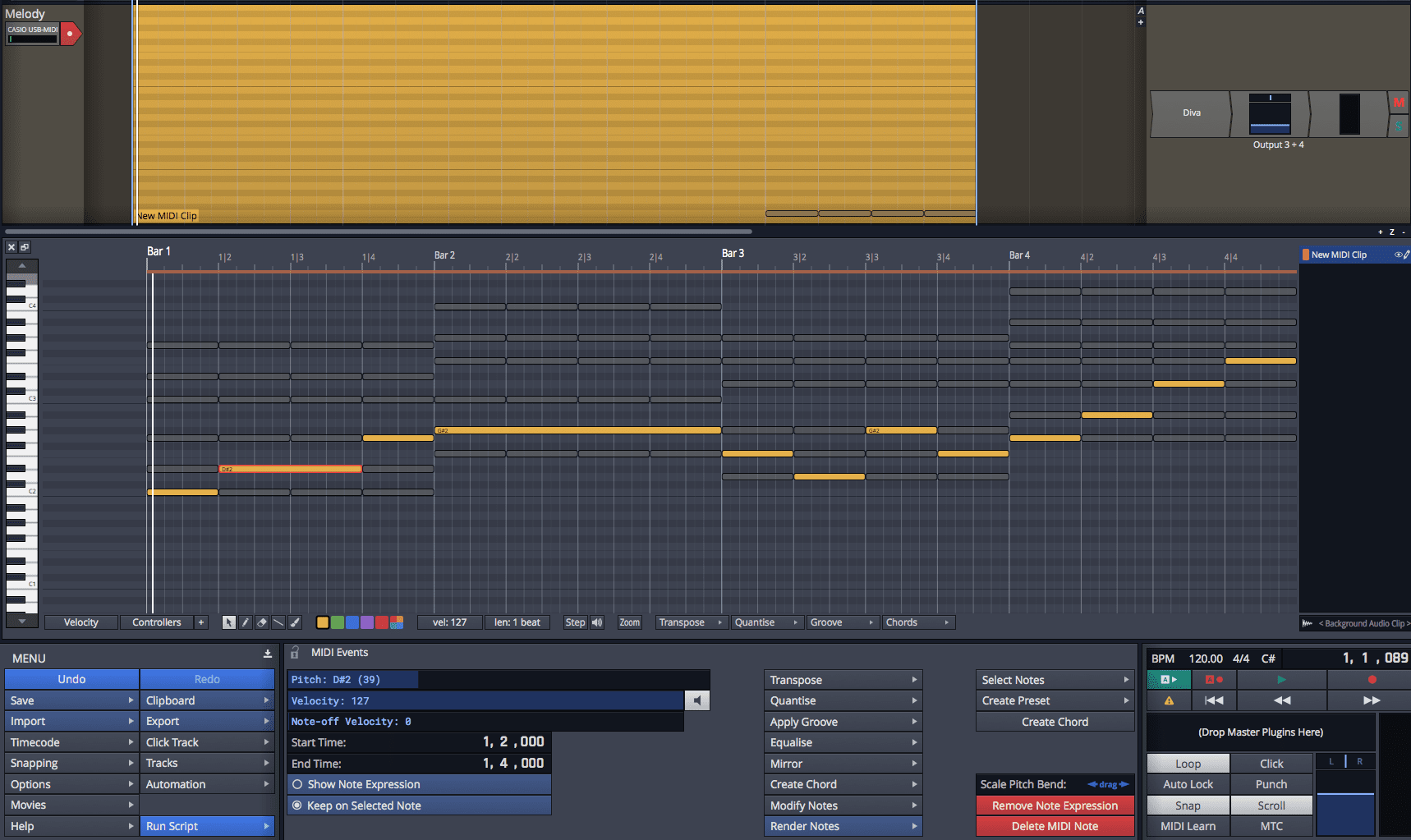 Part 4. There’s just so many neat little workflow things in Waveform, that I may have to do a couple posts on just ‘good things’.

Each MIDI clip has an optional pattern generator. It can generate arpeggio patterns, chord patterns, basslines and melodies.

The patterns can follow the chord track or each pattern can have its own progression.

The video above explains it pretty well, but if you liked videos instead of text you probably wouldn’t be here. I’m going to go through each section myself.

The first thing you need to do is create a MIDI clip then select it and go to the “Pattern” tab in the bottom panel then you have a number of options.

The basic idea once you select a type of pattern is that you can input chords progressions easily. The core of this functionality is the progression bar.

The progression bar is where you can create a progression. Each chord is shown in roman numerals, but you can optionally work in spelled pitches as well.

There are a number of popular chord progressions available, and you can easily switch between them using the arrow buttons. There’s 3 and 4 bar presets along with custom presets (which you can easily save your own of).

Each individual chord can be changed as required. Roman numeral representation is available for non-decorated chords and 7th chords. For chord extensions beyond a seventh you must select a pitch class root and then the extensions that you want. Extensions are only available up to 9ths, but since you can still manually edit the MIDI that isn’t a major issue. In settings you can also define your own custom chords, however currently not for roman numeral representation.

There is a suggestion box on the right side that shows you the statistically most likely next chord in your current progression that’s supposedly based on an analysis of popular music. I’ve tried dozens (probably hundreds) of chord progressions and it seems to work fairly well. I can’t attest to the statistical accuracy, but the results are familiar. If you have a pattern generator on another clip, you can select ‘Other’ and get the pattern from that clip without saving a preset first.

Each clip can have its own selectable key, which is based on a scale (grr… music theory nerd is raging). The clip can also follow the global track or chord track as well. The Global track is the ‘Tempo’ track and you can enter key changes there.

From there each section has its own unique settings. Once you have the pattern generated, the MIDI can be edited as normal. If you make changes to the pattern, your manual changes are lost though.

The first option is to generate arpeggios.

The things you’d expect are here: pattern length (which is basically “speed”), velocity, octave, gate (note length) and the number of steps.

Arpeggios have various styles that are shown as cute drawn lines. There’s different styles for up and up/down modes. If you are looking for ‘down’ modes, they are a type of style presented while in ‘up’ mode.

The root note of each arpeggio can be toggled to play or not.

The Arpeggio generator is really simple, but unlike other DAWs that force you to use a MIDI plugin for this task, you are given the MIDI that you can edit and modify yourself.

Chords have rhythmic options. There’s a number of chord presets which offer you rhythms for the chords. You can select a group of notes in a MIDI track and create your own chord preset if you have a specific rhythm that you want presented. Neat.

Bassline patterns are like chord patterns except they only use the root by default. Bass presets offer rhythmic variation that’s a separate context from chord patterns.

That’s all there is to it.

This is where things get cool. The melody generator gives you the chords of your progression, but split up by a selectable division. With the paint brush tool you can pain a melody using the chord tones. It’s a guaranteed pleasant melody that follows the chord progression that you want.

There is a randomization feature that randomizes melody using chord tones. That’s fun to play with.

These criticisms are for Waveform 9.0.37. 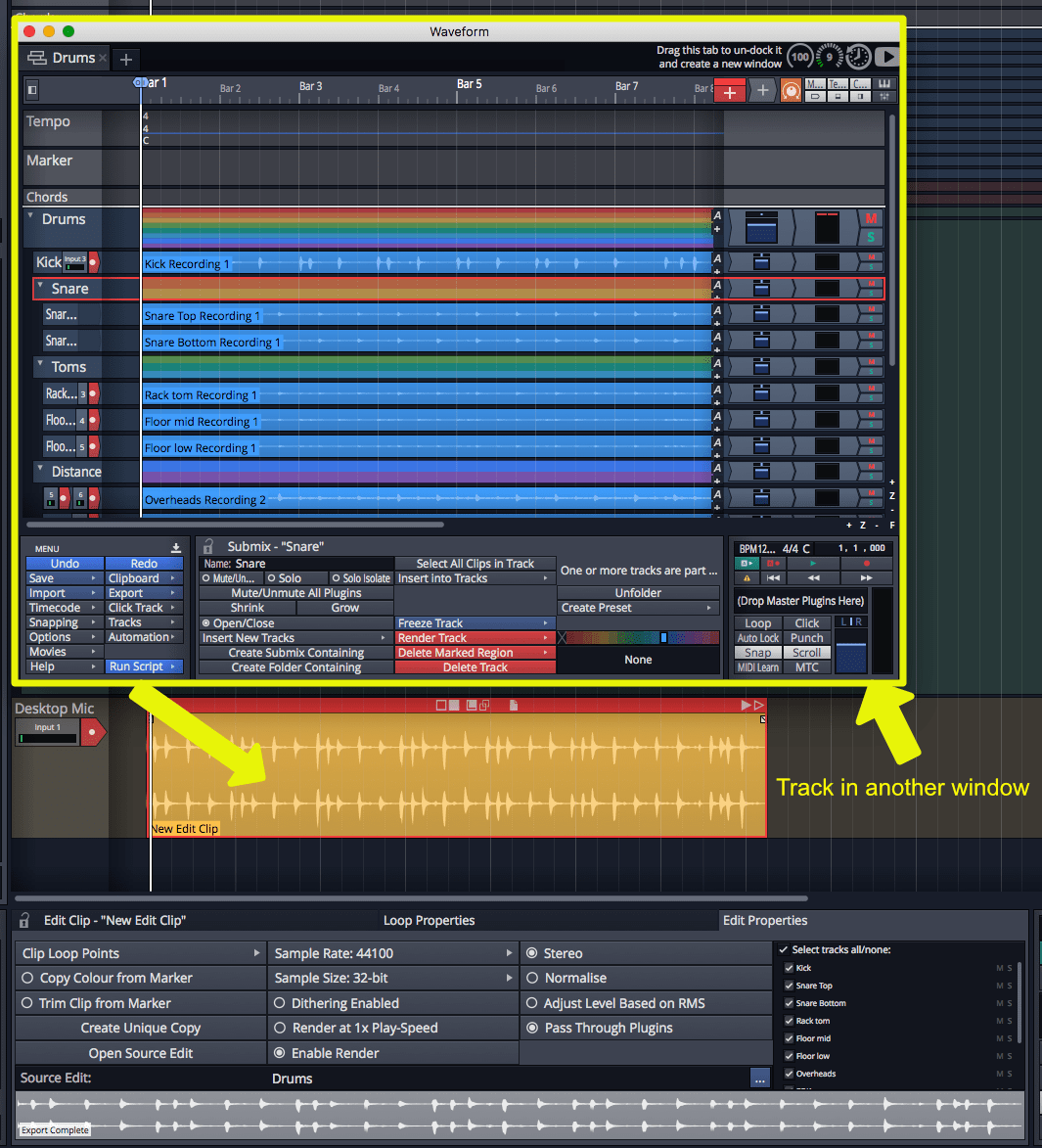 Edit clips are clips that are projects. You can drag and drop a project in to another project. The project is rendered and inserted. The ‘new clip’ object (red box with the + at the top) can also create an edit clip, and you select the source in the properties panel.

You can select which tracks you want in the edit clip, normalize and turn off plugins in the referenced clip. There is an option to normalize the clip based on RMS value, which is a great way to make sure your imported clip matches the general level of the parent project.

There’s not much to say about edit clips, it’s a simple feature that has a lot of use if you are creative about it.

These criticisms are for Waveform 9.0.37.

If the author(s) of Waveform love(s) me, they have a funny way of showing it.

I do a lot of multitrack recording and I often need to edit multiple tracks (or clips) as if they are a single object. Waveform attempts to facilitate this by having folders have a clip that’s a representative of the underlying tracks.

This sounds neat until you try and use it.

Usually when editing multitrack objects, it’s necessary to zoom in on a part and edit that with the desire that the grouped/linked tracks follow. Folder tracks don’t let you do that. If you want multiple tracks to follow the same edits then you need to move the folder track clip, which takes you away from the detailed view of the actual track that you’re trying to edit.

Imagine that in the clip above I want to make an edit with the ‘FOK’ (front of kick) track. I need to zoom in and get it just right. You have to edit the folder track for ‘drums’ to do this and have everything line up properly. So at best I’m re-arranging my tracks around, and I lose potential zoom area since I need at least 2 tracks (‘FOK’ and the folder track) open.

A number of important clip editing commands don’t work, the most important of which is split. That’s right, you can’t split a folder clip (in 9.0.37). Argh! You can’t crossfade either.

The next issue is that warping doesn’t work on folder tracks. Bleh. I use that feature often in other DAWs.

Folder track editing is a feature I guess. If you just want to drag groups of clips around, which you can do by selecting them anyway. For actual multitrack editing it just doesn’t cut it. In fact, I can’t find anything in Waveform for this. I’ve had to cheat on my ‘30 days’ by using REAPER for most multitrack editing duties. 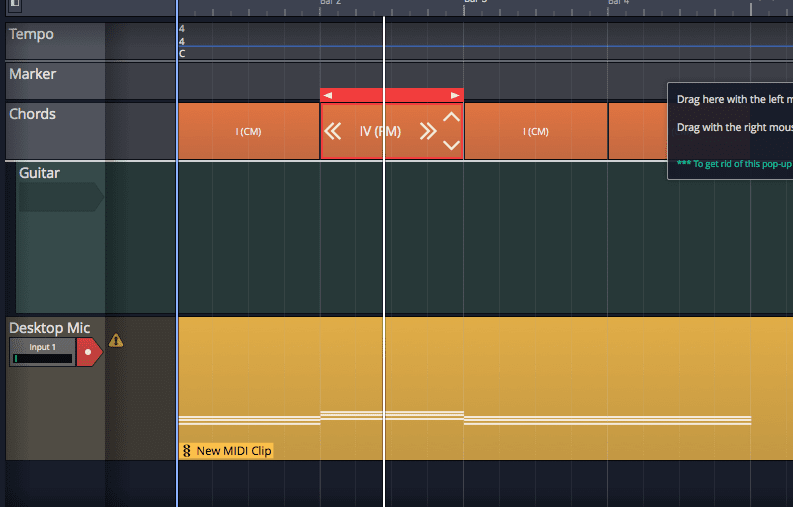 When you see ‘Chord Track’ you might think of Cubase’s Chord track or Logic’s Chord track, but you would be sadly disappointed.

Unfortunately, that’s all the chord track does. It has no idea about the pitch of audio clips. It doesn’t integrate with melodyne, which I’m not sure is technically possible but it’d be great if it was. It doesn’t have any function to make manually-edited clips diatonically follow the chord track.

EDIT - Ok, so this is just confusing behaviour. You need to make the chord track >1 bar to see the extra chords. If oyu are using multiple chord clips then this becomes messy quickly. Another work around is to use multiple chord clips alone, but then you lose the ability to use the suggestions feature and to keep progressions together easily.

The chord track isn’t bad per se, but I struggle to find out how its use outweighs the workarounds necessary for utilizing it fully.