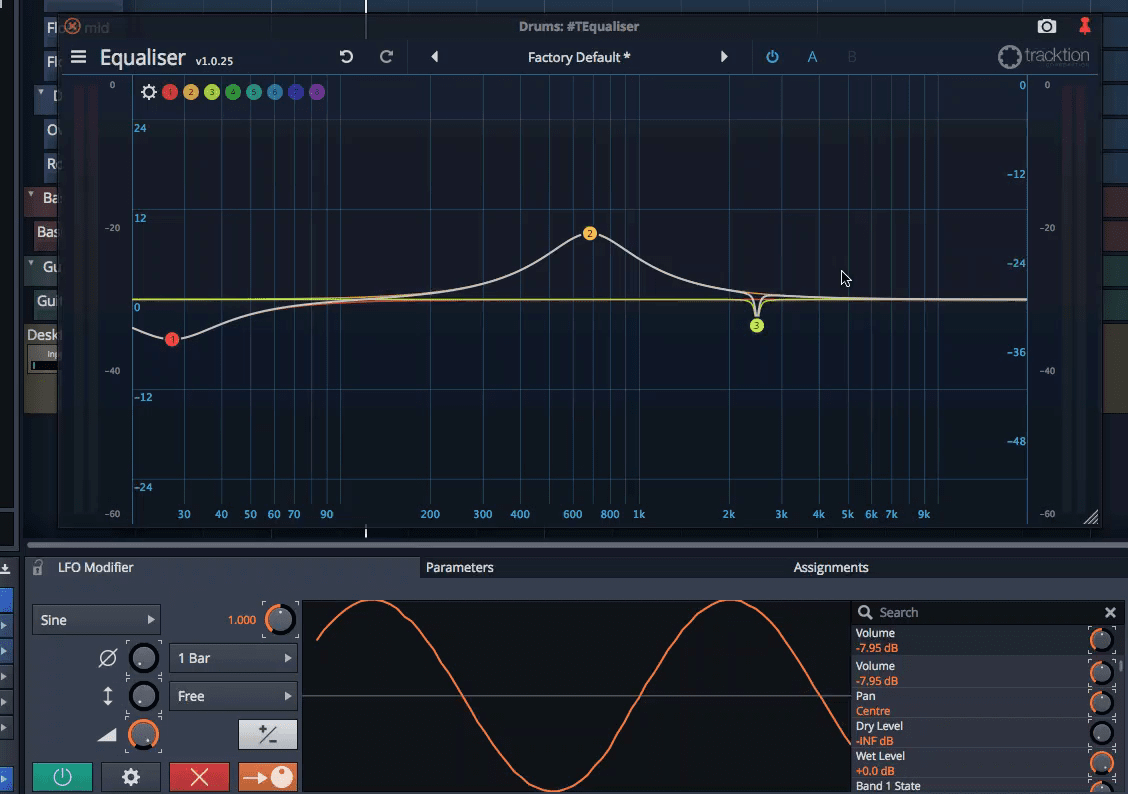 Modifiers about to work

Part 2 of 30 days with Tracktion Waveform 9. I’m trying to get these out every 3-4 days, but I was unable to last week so we ended up having that interview with Ben Loftis of Harrison and Mixbus.

Today I’m going to cover some really cool things, some annoyances that seem minor (but really irk me!), and the weird core of Waveform’s design philosophy.

Waveform 9 introduced Modifiers. These are modulators, which means that they generate a signal that attaches to an automatable parameter and automatically automates it.

Adding a modifier isn’t too difficult. Drag the orange knob in the upper right to a ‘filter’ (or plugin as most of us call it). Select the parameter and setup your modifier.

Modifiers output is assigned to other parameters by clicking the ->O (knob) button, then you can drag the knob in the right hand column of the parameter you wish to modulate. The amount of modulation is shown by a light grey outline that indicates if it’s modulating by a positive or negative influence. All plugins on the track are selectable, including other modifiers. (Some of these routings, like envelope follower to its own release, will cause Waveform to crash! Oops! EDIT - This is fixed in Waveform 9.0.38 beta or higher)

A nice feature of modulators is that you don’t have to select between beats and non-beats modes. It’s always beats multiplied by some factor. So you end up with a full range of motion that’s still relative to a musical value.

Modifiers work with plugins. Any automatable parameter can be modulated by a modifier.

The modifier system is fun. It’s useful. It’d be a lot better if the envelope follower more easily took audio from other tracks. 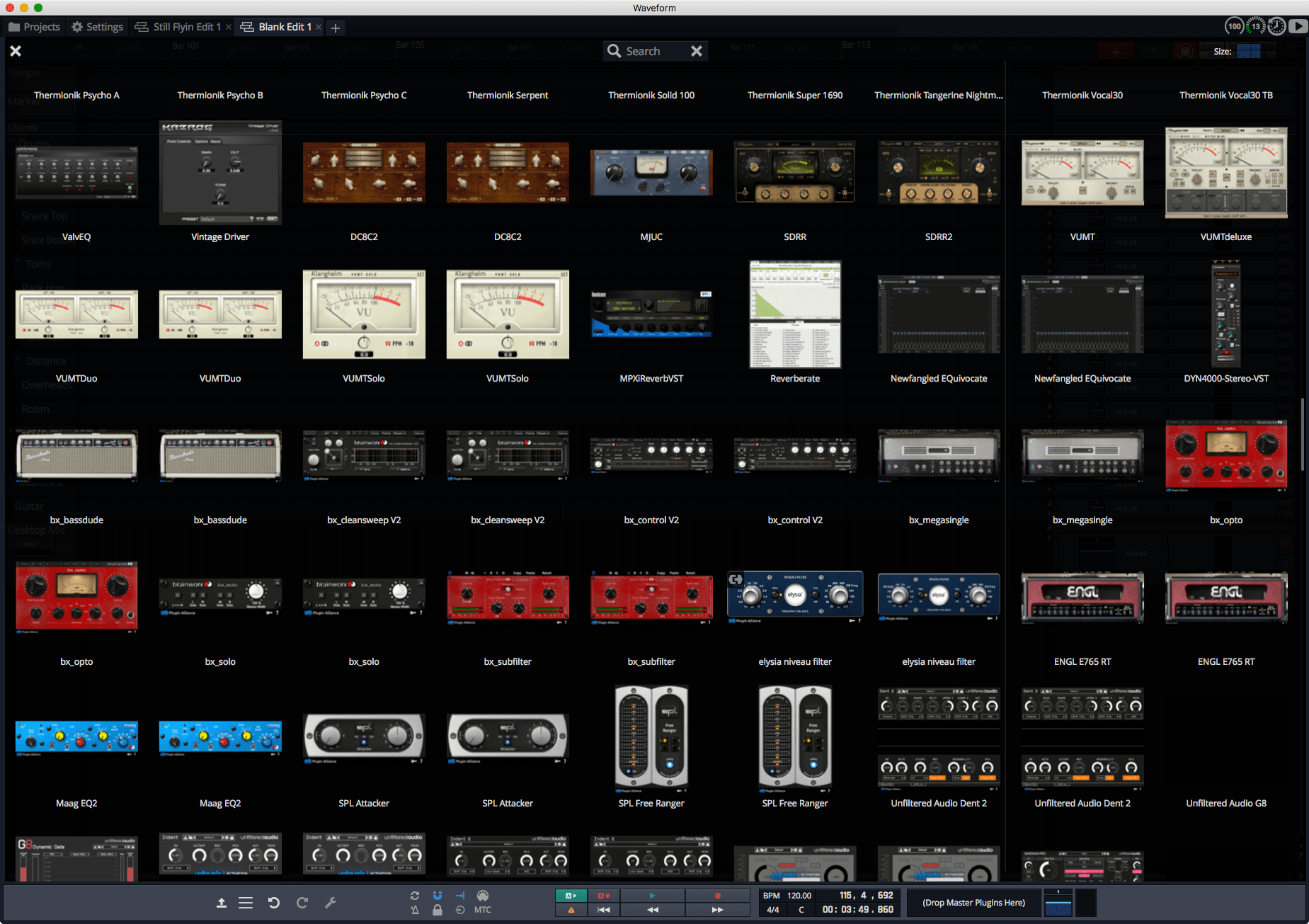 Somewhat hidden is Waveform’s plugin selector window. Right click the + inside the arrow box in the upper right and you’ll get a full screen plugin selector.

Plugins are shown with their native GUI if you created thumbnails for them. You can search in the search box to narrow down the list. It appears that plugin tags are not searched unfortunately, which is a big miss. It’d be nice to search for your ‘compressor’ tagged plugins to only show those.

To add a plugin you click and drag. The selector GUI disappears and you drag the plugin where you want it.

The plugin selector is an inspiring way to browse your plugins. 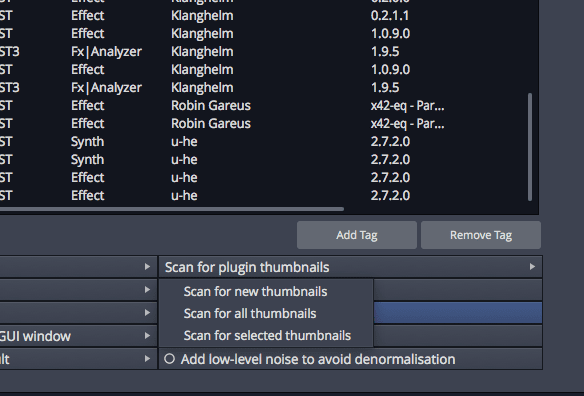 To use the plugin Selector in its optimal state you need to have images of every plugin. What a drag! Or is it?

In the Settings tab under Plugins you can Scan for plugin thumbnails. This is a totally automatic process that opens each plugin and screencaptures a thumbnail of it.

This process can take a while the first time you did it. I have A LOT of plugins and it took me nearly 80 minutes the first time. Luckily Waveform allows you to only scan new plugins or scan selected plugins. When a plugin is opened, there’s a camera icon in the upper right of the window title bar. So you can change the plugin’s GUI and take a new screenshot without much hassle if the automatic screenshot is subpar.

Other DAWs have a similar feature, but it’s usually manual and doesn’t integrate as nicely as this does with the plugin selector

It seems like a small thing, but these plugin thumbnails do a great job of jogging your memory when you’re trying to solve an issue and you’re not 100% sure of what product will do what you need.

It’s a lot of hand moving around the keyboard when you have to rename 200 tracks (which I frequently do). The renaming method I outlined above only works if you have the bottom panel open too, so you may have to change your workflow depending on how you have Waveform setup. Waveform doesn’t name new tracks with the imported file when you import a new file. So anything that you import to a new track requires renaming.

Other DAWs allow you to simply press tab for the next rename, or just the down arrow, or they have a special renaming functionality.

I know this is a minor nitpick to a lot of people, but to me it’s a guaranteed hand cramp a couple times a week.

I’m big on track colours. I think that it makes it much easier to visually locate items in large projects. I like to have a selection of bright coluors, muted colours and the capability to easily create colour gradients across tracks.

That image above is the colours you get to select. A handful of muted, low-contrast colours. You can select gradients for a selection of tracks either. Not only that, but there’s no way to set colours for a folder so any time that you add something to a submix or a folder you have to manually colours it. 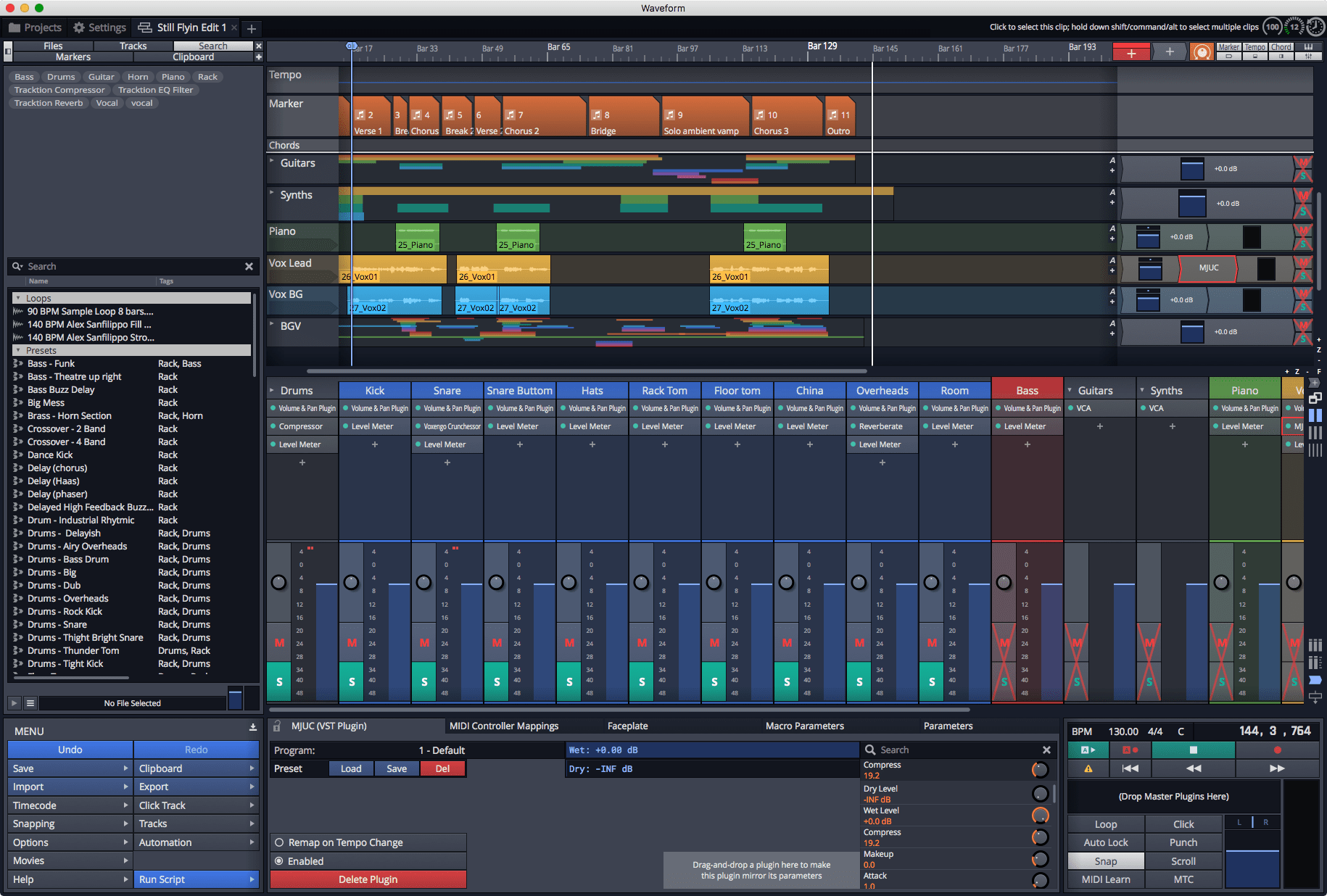 Tracktion Waveform in one screen

One of the main design aspects of Waveform is that basically everything is in one pane. Yes there’s a Projects tab. There’s a settings Tab. The mixer can go in to its own tab. The MIDI editor can spawn a new window. Plugins have their own windows.

Wait a second. That’s not everything in one window?!

It really confuses me when I use Waveform sometimes. There’s a lot of things on screen sometimes. It’s actually nice for a good portion of your average workflow, but at times it is rather overwhelming. I don’t need to see 26 (I counted) different widgets when I just want to change the colour of a MIDI item. That is a lot of clutter. I don’t want to see 25 widgets when I want to add a new tag to a track. I also don’t want to have to wait for a silly animation when I collapse that panel.

Adding plugins is always a click-and-drag affair, which I hate. There’s really no way around it because the interface is all smushed together to make space for an entire DAW on one screen.

Of course I can’t label this as a bad thing. It’s unique and I can certainly see how this is a great GUI paradigm for certain workflows. I feel like it’s becoming clear that no amount of clever-thinking is going to allow the Waveform team to continue expanding the feature set of the product all on one screen. I’ve been following Tracktion since V1, and Version 8 was the first time I really started to feel like the single pane is just not enough space for the functionality confined in to it.

And yeah… no other DAW really works exactly like this. It’s weird.

This post took 9 hours to research, photograph, write and edit. If you appreciate the information presented then please consider joining patreon or donating!