Routing Audio to Envelope Follower with Racks in Waveform

In my previous Waveform Review I talked about issues with the Envelope Follower modifier.

The issue is that if you want to route audio from Track A to the modulate audio on Track B,

EDIT: Racks are NOT necessary unless you want the envelope to happen live. I updated this post on the 16th of March to reflection a correction by a reader. Thank you PierreG!

Someone asked for instructions on how to do this. So here it is!

The easy way is simply to drag the envelope follower’s box to the plugin you want to control. That’s no fun though, and this causes the modulation to only occur during playback, which may very likely be sufficient for you.

When I released this post on the 15th of March, I originally neglected to include this information as I thought that this method was bugged. A user on the Tracktion forum offered a correction, and after some testing I realized he was right! Thank you again PierreG!

This is an introduction to racks, and necessary if you wish to use the envelope follower without playback (for live processing). 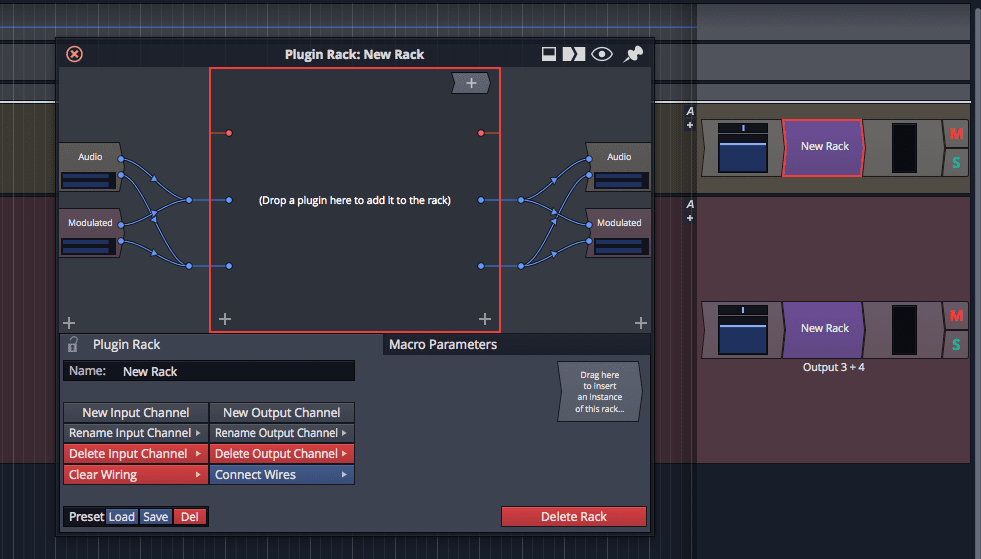 First step is to add a new Rack. Apply this rack to your ‘to’ and from’ tracks.

In the image above I want to control a plugin on ‘Modulated’ by the audio on ‘Audio’ track. 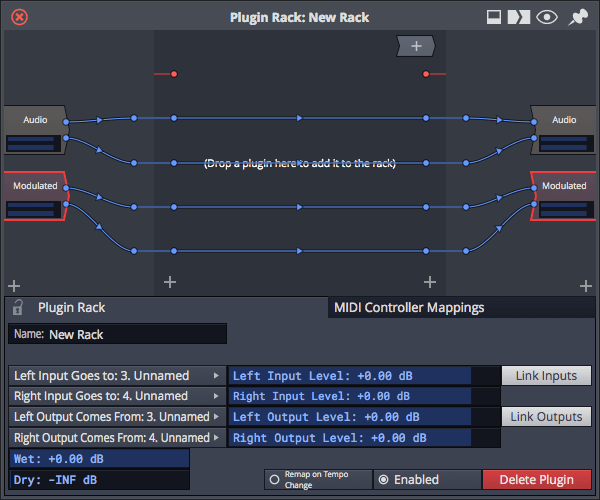 Next we need to add extra I/O. For a stereo signal you need to add 2 inputs and 2 outputs.

Connection the I/O as shown in the picture. 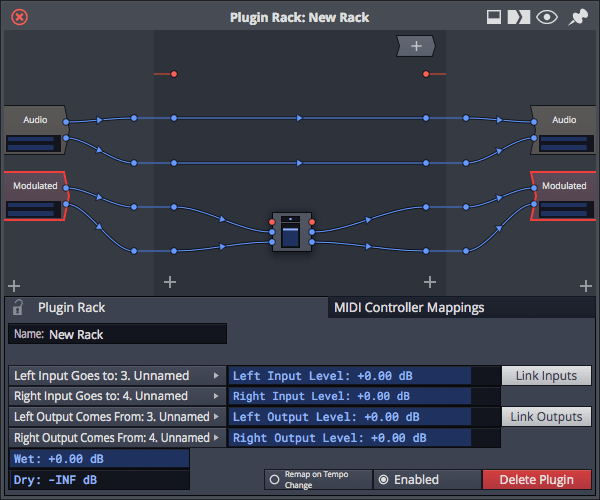 So I place the plugin in the path of ‘Modulated’.

The trick here is to add an ‘Envelope Follower’ on the ‘Audio’ track now.

Next we want the modifier on the ‘Audio’ track to modulate the ‘Volume and Pan’ in the ‘Modulate’ path in the rack.

Drag the modifier from the track to the rack, on to the ‘Volume and Pan’ plugin. When the menu pops up, select the parameter you want. In this case it’s Volume for us.

Check out the video above.

Now the audio from the ‘Audio’ track is modulating the ‘Volume and Pan’ plugin that’s in the path of the ‘Modulated’ track. We’ve essentially sent a modulation signal from one track to another. It just took too much effort.

You can save this as a preset to use later to avoid some of the routing. I suggest doing that.

This post took 30 minutes to put together for a user on KVR. If you appreciate the information presented then please consider joining patreon or donating!