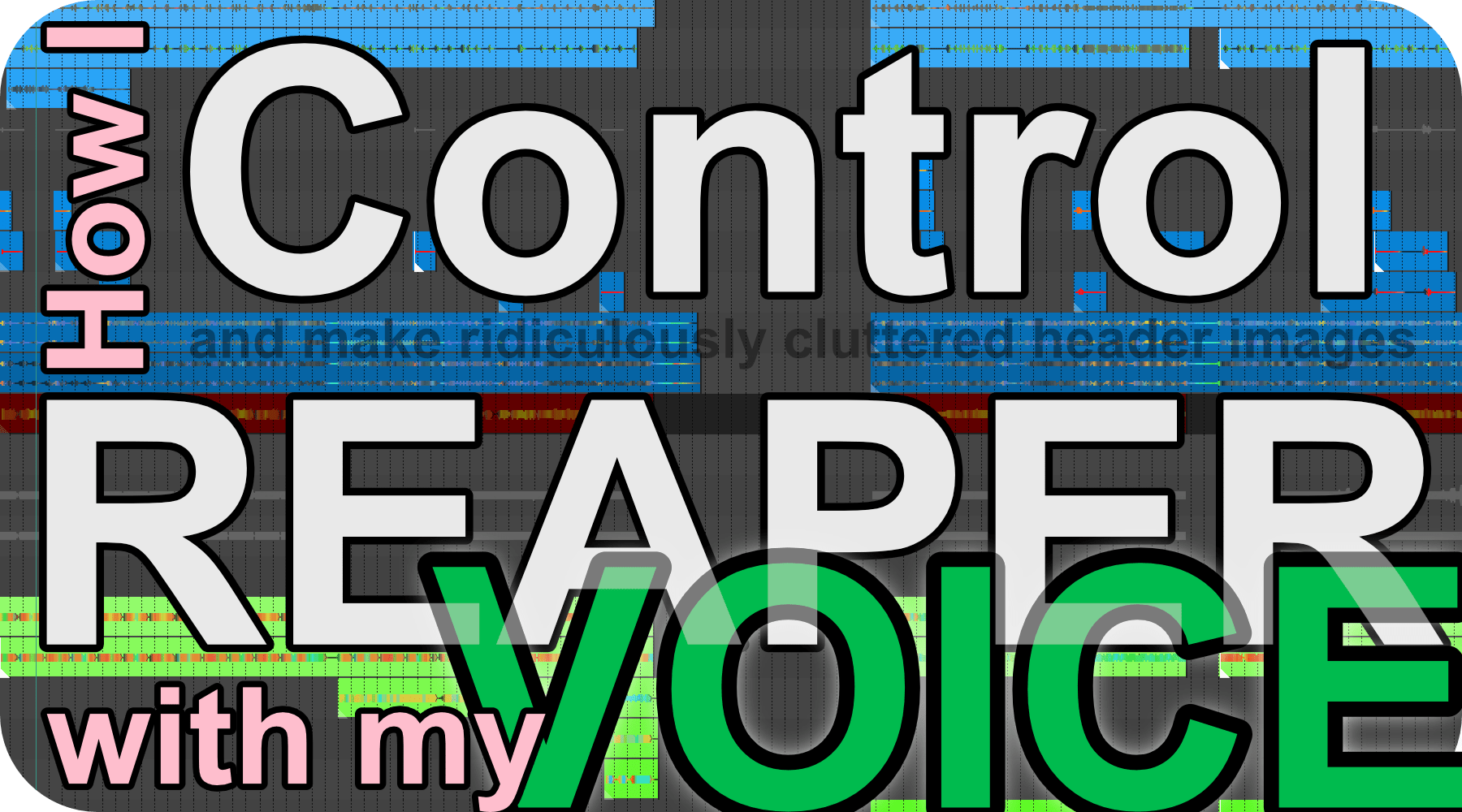 I’m going to let you in on a secret. Don’t tell anyone though.

While working (Software Developer/Tech Writing), I haven’t used my keyboard for the entire week for work related tasks. Not only that, I’ve been more productive than otherwise.

I’ve also not used my keyboard for REAPER since late December. Soon, I won’t be using my mouse at all either.

I’m using Talon Voice and it’s been amazing. Let me walk you through how this works with REAPER, and I’ll explain my Dev use in another post.

Before you read this, note that some things have changed before I finalized this post. Some code/text might not match the repository.

More importantly, I’m not a Python dev and this is a somewhat opinionated Python scripting environment. Many things that you might see and think “What, you could do it like…”, you can’t. Most of the time it’ll just be my fault :)

The application that I’m using for this is called Talon. It allows voice control, noise control, and (single monitor) eye tracking.

I use only the voice control portion currently. I tried eye tracking and learned that I stare off into space while I use my computer too often (which is probably why I use my mouse like this!)

Dragon supports a number of engines for audio recognition (not just speech, but some noises as well). Dragon is still the indisputed king in this realm and Talon can utilize Dragon, but Dragon is dead on macOS. I’ve had a great deal of maintaining a working Dragon, so I instead use a wav2letter model trained by the Talon author(/team?). The wav2letter model available to Talon Beta users works incredibly well.

If this interests you then please Join the Patreon and Join the Slack Channel.

Hasn’t this all been a setup!?

You might think that I spent all this time working through key commands in REAPER to prepare for this transition. I have not. I started using Talon on December 13th. This series was started on November 9th.

It just happens that my views on interactive design align nearly perfectly with voice control.

I was able to take a list of REAPER commands, apply a regex replace and immediately begin to work.

I use key commands for most things in REAPER, but I use OSC for various commands. So this means setting up OSC in REAPER.

In Preferences->Control/OSC/Web I add a new OSC “device” with:

The rest is default.

How I got started

To create the initial Talon command file, I took this post, copied the action segments and ran the following regex -> replacement

Then replace control with ctrl, comand with cmd and option with alt.

At this point I had a bunch of lines that looked like this: * **h** View: Move cursor left to grid division``

To turn these into Talon commands I used:

From there I needed to hand edit some commands (remove superfluous phrases like “to cursor” or “move to”), but I had many things like:

Now if I say “Zoom time selection”, then the key z is pressed.

In about 5 minutes I was able to take everything I’ve written about and turn it into a voice command.

Anything that adds a new action will be added to day 23’s list of commands.

I want to be able to say “Find Track Stereo Kick”. So this means creating a capture in Talon.

I add the following to a file named reaper.talon

This command “find track” that also captures the words that follow that phrase. I then use my focus track manager script, enter the text from the phrase and hit enter.

Now the tracks matching that phrase, and their children, are displayed.

Often I want to go to a numbered track, since I always have a view of the number on the left hand side of the track control panel, or the mixer control panel.

I use the python package pythonosc to send OSC messages to REAPER.

This is pretty simple, I just send a OSC message directly to REAPER “go to track” capture.

I use a similar capture for:

Note: Since doing this, I’ve realized that nearly every OSC command I’ve setup has a better alternative, but they’re all over the place! I still like the idea of a central communication method. Possibly the Web control in the future?

Soon you’ll be wondering how you get REAPER to barf up its current state.

The action Control surface: Refresh all surfaces does this.

REAPER will spit up a lot of information, so be careful when you use this! This can be reduced by editing Reaper.DefaultOSC to remove/comment the data that you don’t need to see.

I only use it when showing a GUI and on initialize.

FX Parameters means getting data from REAPER. To do this I run an OSC server and keep a dict of the most recently sent 1024 parameters.

There’s only a need for parameter information for the currently shown effect, so there’s no need to track anything but the latest data that REAPER sends… yet.

A simple server example (note that Talon does not yet support asyncio):

From there I create a GUI with talon that allows me to cycle between banks of the 1024 effects parameters.

That relies on code additional to the server example (currently viewed effect state stored as globals, as complexity warrants this will be made less gross. Perhaps more accurately - when I better understand concurrency in Python, I’ll change it.)

Then I can use a command like “Parameter 3 update 40 percent” to update parameter 3 to 40 percent.

It’s no good if a plugin supports 100s of parameters and I can only see what fits on my screen.

I tell reaper that I support an FX parameter bank size of 1024 client.send_message("/device/fxparam/count", 1024) and then maintain a dict with those settings.

The parameter’s values are updated in realtime as well.

There’s a lot of parameters for some effects/instruments!

Cool. I can do that.

Whew! Some plugins have 1000+ parameters. I don’t touch but maybe a dozen or two of them for any plugin, and browsing for the right parameter (or remembering it) each time is an absurd expectation.

I can say “save parameter 5” and a dict of {plugin_name: {index: parameter_name}} is updated.

Any time I pull up an effect with the same name I can say “Favorite parameters” and it will show me a list of the parameter number, name and its current value!

These favorites persist to disk.

All parameter changes are in percentage currently. There’s some complexity here that I need to explore.

“Show markers” and “go to marker 2” work as you might now expect. Same for Regions. (replace ‘markers’ with ‘regions’)

“Edit Marker” will bring up the dialog to edit a marker. Same for Regions. (replace ‘marker’ with ‘region’)

I do not have functionality for editing markers/regions, as I’ve found it easier to delete them and create another. For my uses, retaining the ID’s associated with a marker/region is not valuable.

I can send arbitrary actions using the COMMAND ID using these functions:

This is useful for when I want to triggering action, but I do not want to assign it to a war shortcut.

REAPER needs to be setup for OSC input to control tracks by editing Default.ReaperOSC in your settings folder, or using code like this:

If setting these via OSC, it must be done after REAPER is opened, or various /track commands will not work correctly via OSC.

I have my Talon setup to send these messages on load, but often REAPER is loaded after Talon.

I can say “initialize reaper” or “reset reaper” or “setup reaper” to ensure that my track navigation commands work. I could also edit these settings in the Default.ReaperOSC file, but that’s not as portable of an option.

REAPER has no way to set input via OSC or command, but we can use the amazing ReaConsole to do this!

I have an action to send OSC messages at will in my reaper.py:

Then in my reaper.talon I can trigger ReaConsole’s SWS: Open console with 'i' to set track(s) input and enter the input assignment.

Do a thing to many things

I use a “do thing

Then in my reaper.talon I can trigger ReaConsole’s SWS: Open console with 'i' to set track(s) input and enter the input assignment.

I can say “Select tracks 36 through 114” and it will select those tracks inclusively. Or “Mute tracks 1 through 5” or “Solo tracks 10 through 2” (larger number first).

(Note Talon Users: It took me a while to figure out how to refer to multiple numbers in a command. Take note of number_1 and number_2 there.)

Alternatively I can leave the console open for something like adding a track name prefix:

I have cursor movement down fairly well, and track selection down. Now I need a way to select an item. Done.

I’ll add all the available commands to my REAPER settings after this series is finished.

Not a pleasant experience.

My REAPER setup is constantly evolving, but you can clone, watch or issue pull requests to my Talon setup.

I can achieve all basic (that I’ve needed!) recording/editing tasks with REAPER by voice.

This is potentially useful for anyone with disabilities (like myself), injuries or someone that wishes to control their REAPER software remotely, such as with a wireless lapel mic as they move around the studio.

If there is sufficient interest then I will cover my programming and writing set up as well. This is all changing as I get used to it and learn what I need from the system, but maybe my experiments will help you get started.

I’ve done a good bit of experimenting with REAPER’s OSC, and I’ve since decided that it’s an awful option. The web interface is a better option, but I didn’t want to spend another 2 weeks yakshaving before getting out a proof of concept.