More REAPER setting changes! Maybe one day I’ll get around to using the thing :)

Some of these changes are project specific changes. This means that I need to create a project template. My default template looks something like this:

The “Rig” tracks are setup with effects to achieve a specific tone.

The “Replace” tracks have a drum replacement setup, which isn’t always used.

This is a very fast and dirty setup. My last template evolved to around 250 tracks in a couple weeks. The anemic orchestral section there will be filled up when I have some more time to have fun!

I also added some colour. I wanted to use SWS: Open color management window and SWS: Set selected tracks to color gradient, which was a terrible workflow. Two layers of modal dialog that must be used, closed, then another action used, then repeat!

There are some script options for gradient colours, but I gave up.

Mixing from the arranger

I’ve decided to try “mixing from the arranger” for a while. This is the 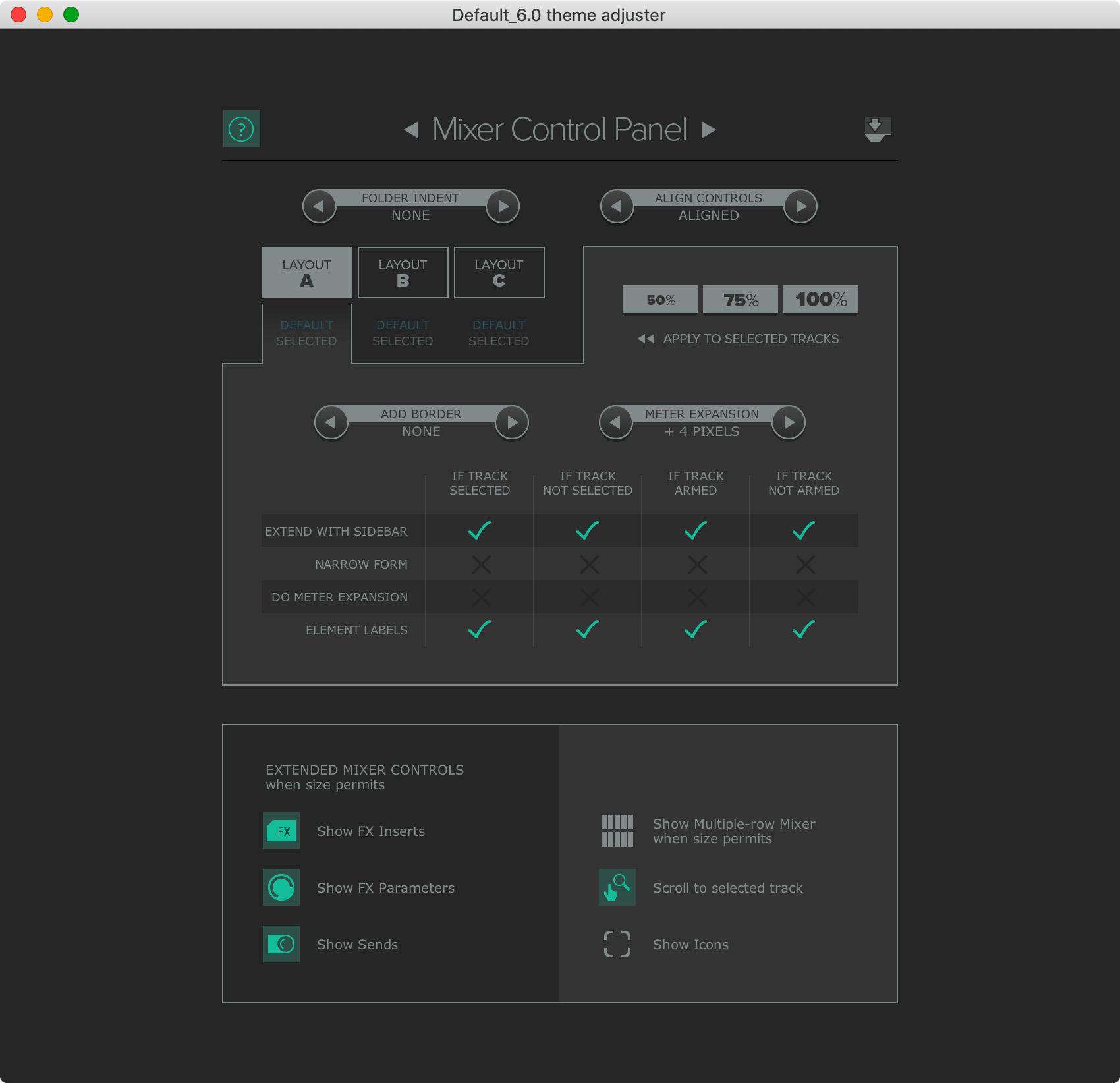 Second go at the MCP Theme.

These are my settings for Layout A, and I’ve changed View->Screensets/Layouts->Layouts->Mixer Panel to “200% A” for my Editor screenset.

I will need a few shortcuts to work with this, specific adding/selecting FX.

This is the first time I’ll be installing a script from reapack to do something, because it is VASTLY superior to REAPER’s own capabilities.

I’ll likely be using this frequently, so I’ll immediately assign it to the shortcut of F12, which is an easy key to hit and out of the way of other commands.

Quickadder doesn’t allow “browsing”, and I occasionally want to browse. I’ll use REAPER’s default FX Browser for now and assign it to F11, which is right next to Quick Adder’s F12.

I also want a quick way to open existing FX. I’ll be assigning those to control-number. Note that no-modifier is grid, numberpad is markers, and command is FX.

I’m using Control specifically because I have Caps Lock remapped to Control. It’s easy for me to use Control with the top row of keys due to this remapping. 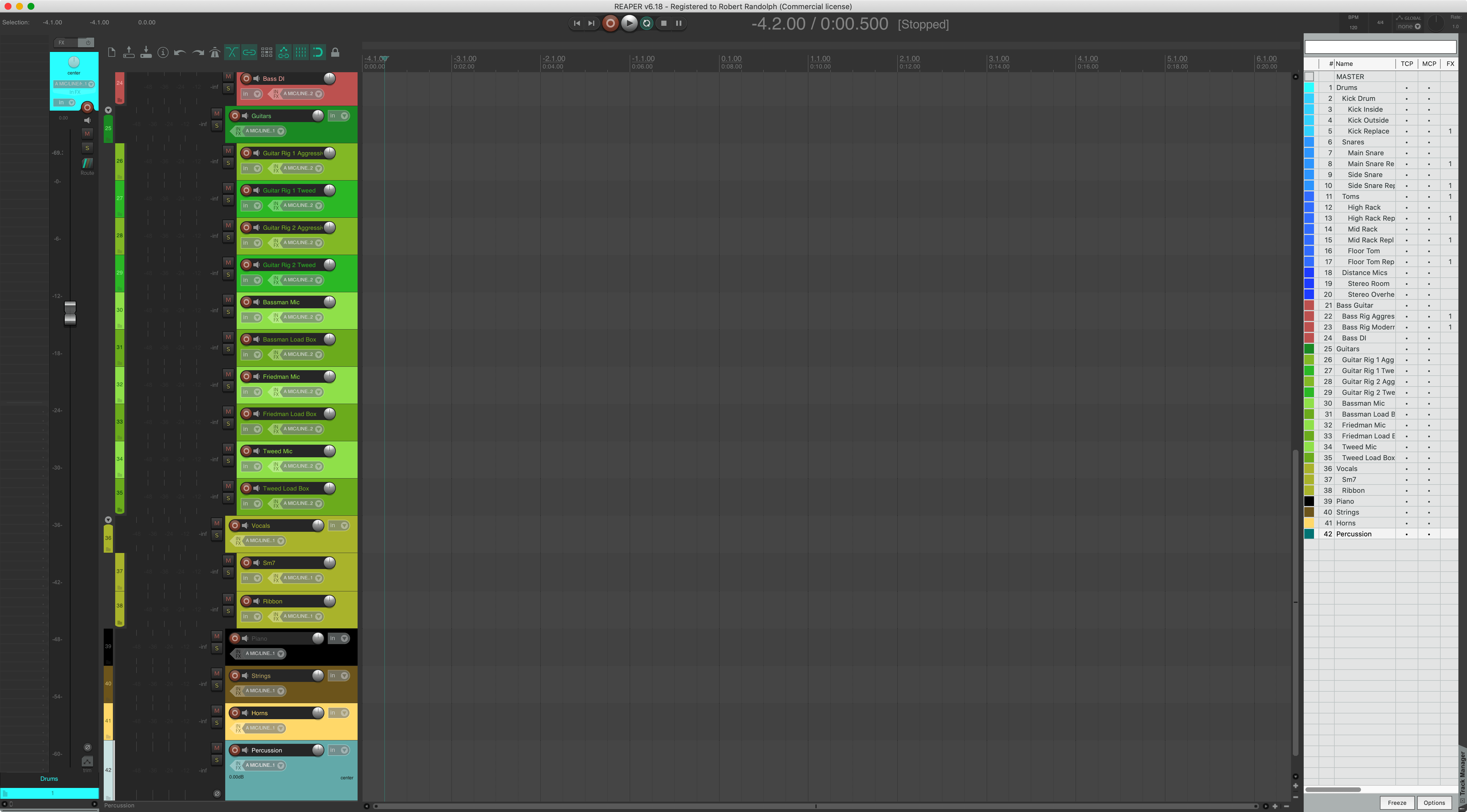 Ok, I have to use the cursor in order to use REAPER. It’s fairly clear that without (and possibly even with!) extensive scripting it would not be possible to use REAPER with a keyboard only.

I’ll be using different Modifier-Meanings™ as from the previous design session. I realized that I’m used to option for deletion, instead of control. I will write an article with updated shortcuts as I continue to think through them.

I’ve adjusted the modifier meanings so they don’t have “magic” meanings (‘other action’ type things). Each one has a specific meaning.

I have implemented all of these mouse modifiers in my setup. Previously discussed hotkeys have yet to be implemented.

I’m noting the changes from defaults

Open up Preferences->Mouse Modifiers if you want to follow along with these changes:

I don’t see a reason to copy a region without its contents.

Wow! First time I’ve ever managed a cohesive set of mouse modifiers in REAPER. This is fairly easy to use for me, as I always know (or close) what a modifier is going to do in a given context.

Might actually make mousing-around ok… in a “This form of torture isn’t as bad as ripping my toe nails out “ sort of way.