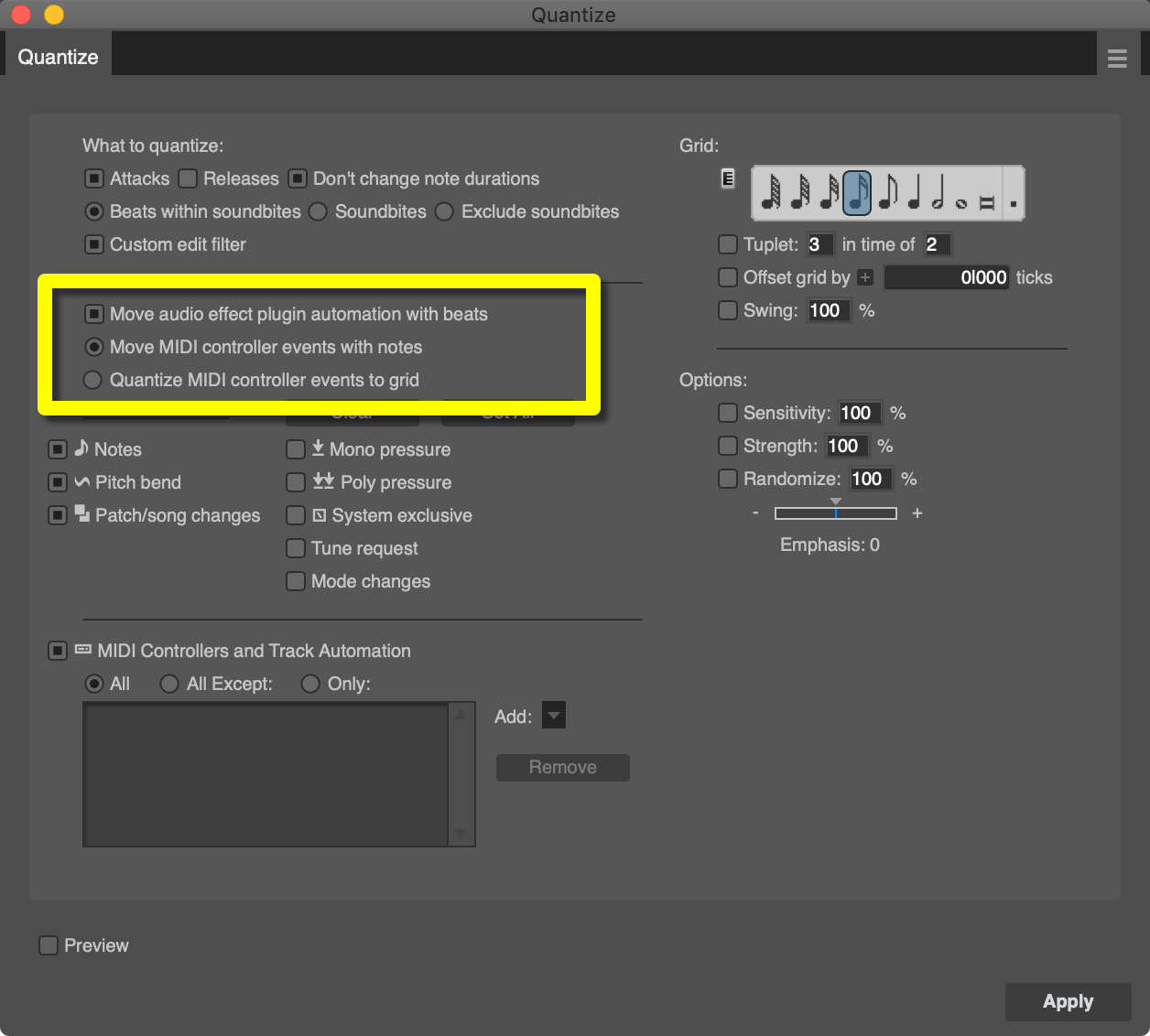 A while ago I wrote a bit of an article about what I hated in Digital Performer. (I have updated that post as well!)

Well, Digital Performer 10 is out!.

I had a bunch of prepared content for DP10, but it appears that other press, including MOTU, managed to cover the same topics I was going to. I hate duplicating content and I avoid it if possible. I sorted those posts away. THIS IS NOT A THOROUGH REVIEW. It’s just the things I like about the update.

This isn’t the sort of thing that MOTU advertises very well, but by my account there’s nearly 100 bug fixes over DP9.5.

Most importantly, the Windows version is finally usable I think. Version 8 was awful. 9 was hit or miss. Version 10 has been excellent, minus some GUI weirdness on occasion.

If you’re not a macOS user, then may not know the beauty of spotlight (or Alfred!, which is what I use). Windows search is terrible in comparison.

The idea is that you press a key combo and then have a ‘global search’ of sorts. DP10 has that now.

Shift-Space and now you can quickly find any command you need. No more assigning arcane shortcuts that you’ll never remember, or searching the menus for 30 seconds to find that one quick thing.

DP has solved this better than any other DAW by just “borrowing” a perfectly working concept from their original platform.

If you watched my video about radial menus then you may be surprised that I prefer DP10’s system over radial menus.

The concept is similar, but instead of mentally mapping location to a command, you can just utilize the spelling of the command itself. Even if you forget where it is, you can remember it. Eventually you’ll learn some quick nonsensical shortcuts like mo i to find ‘Move Insertion Point Left’.

The downside is that it doesn’t have smart fuzzy searching. If you wanted to search for “Quantize Note”, you can’t type QN. I wish Motu would improve that.

I already explained VCAs in DP10.

I love this feature, and it’s the #1 reason I’m not going to spoil the conclusion

This is one of my favorite features.

Previously Digital Performer would only allow you to move a note or a soundbite (region/clip/item) by the amount set in the group. If you wanted to move a note to a grid line then were are forced to use the quantize menu, which is not the best of workflows.

In Digital Performer 10, you can now turn off relative snapping so that things that you want to move will move to the grid lines instead of moving by the grid amount.

It’s optional, so if you like the ‘relative’ behaviour you can toggle it on/off at will.

Fixed snapping is when you setup the snapping divisions yourself.

Let’s not kid ourselves. This is not a revolutionary feature. Other DAWs have had it for a long while, but I think DP does it better… in the main way it matters.

Firstly, ZTX stretching is used instead of Elastique, and I personally prefer ZTX. You can hit that link and choose for yourself! Getting a good sounding result is the #1 thing, and I think that DP nails it.

There are some issues though:

I’d love to have a big section about this, but I haven’t tested if/what VST3 features are supported.

All of my VST3 plugins work though, and that’s A LOT of them.

It doesn’t do this naively for MIDI either. Things are stretched between quantization paths, so you end up with something fairly natural instead of just some clump of data moved.

Groove Quantize has this too now. 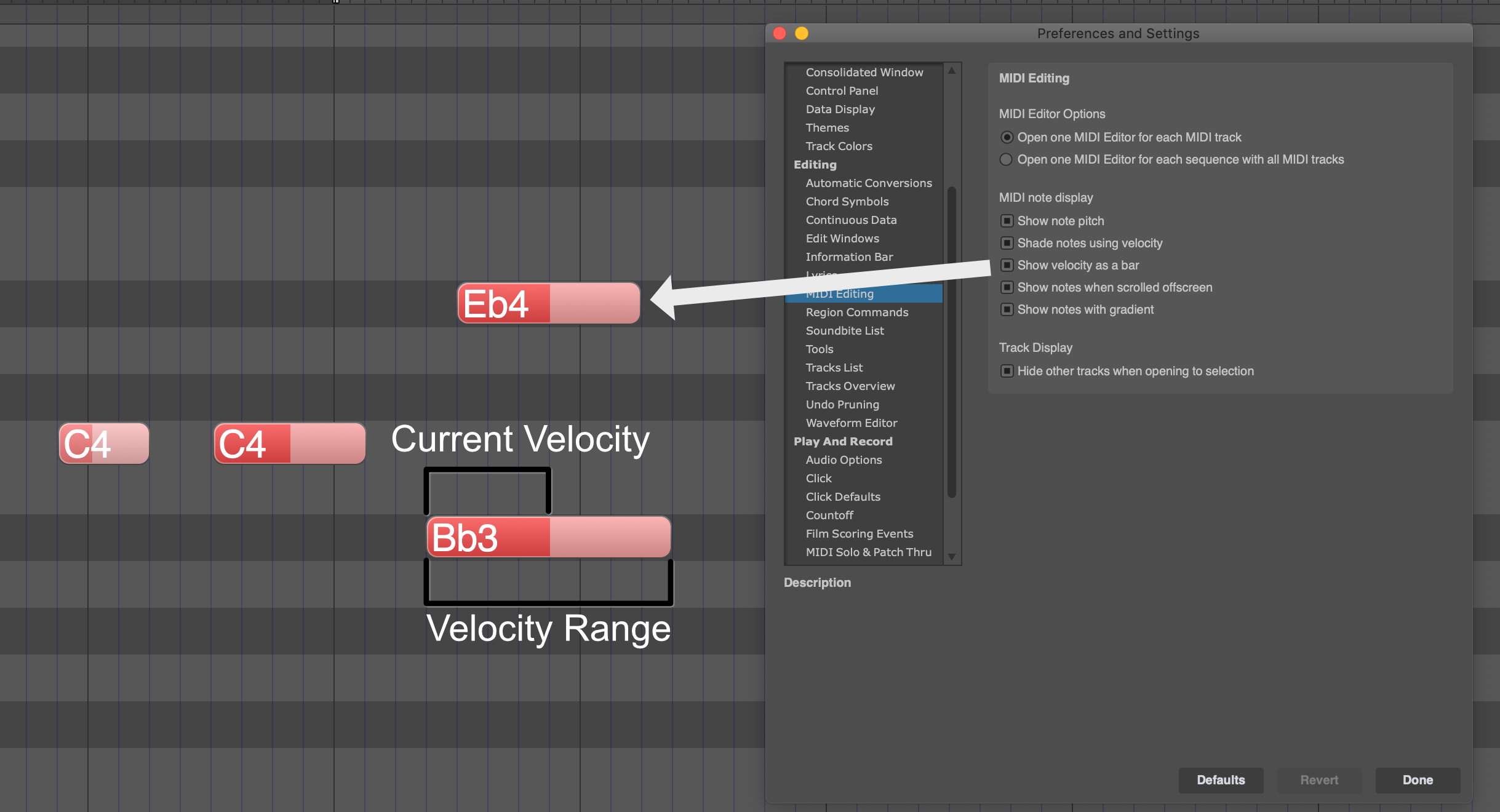 Velocity is easier to see now!

There’s now an option to display velocity as a bar inside notes. A great feature to have when programming MIDI or working with MIDI in general.

Actually changing MIDI velocity in DP is still terrible, but this is a big step in the correct direction. 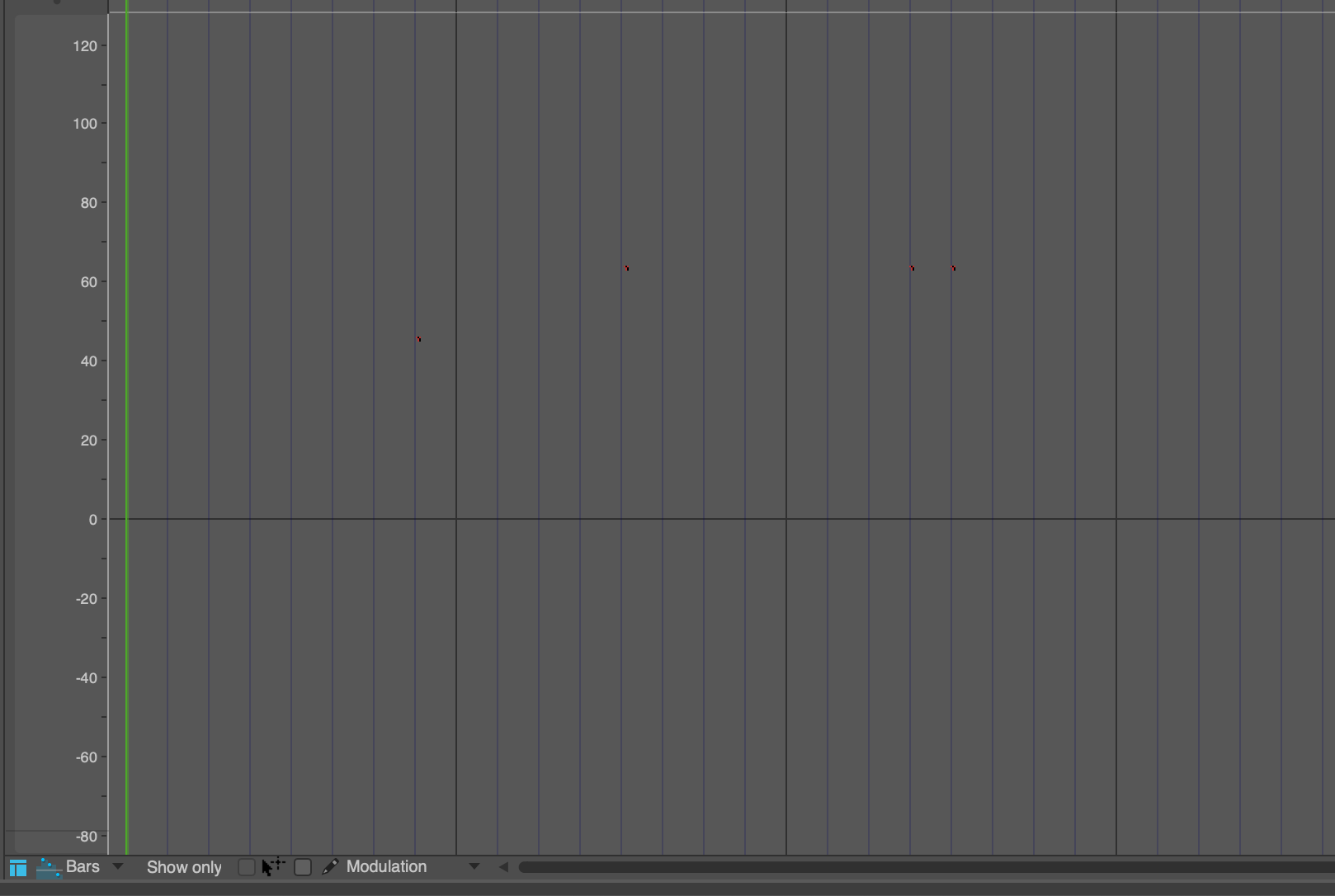 Even though you can now clearly see velocity as colour, or as a bar in the note, the actual editing space is still terrible to work in. There are ways to make them slightly more visible. That doesn’t help much.

BUT I have a video on a ‘workaround’, that I think actually makes editing MIDI Velocity in DP a pleasant experience. It can be difficult to see what you’re doing, but actually doing it is a breeze! 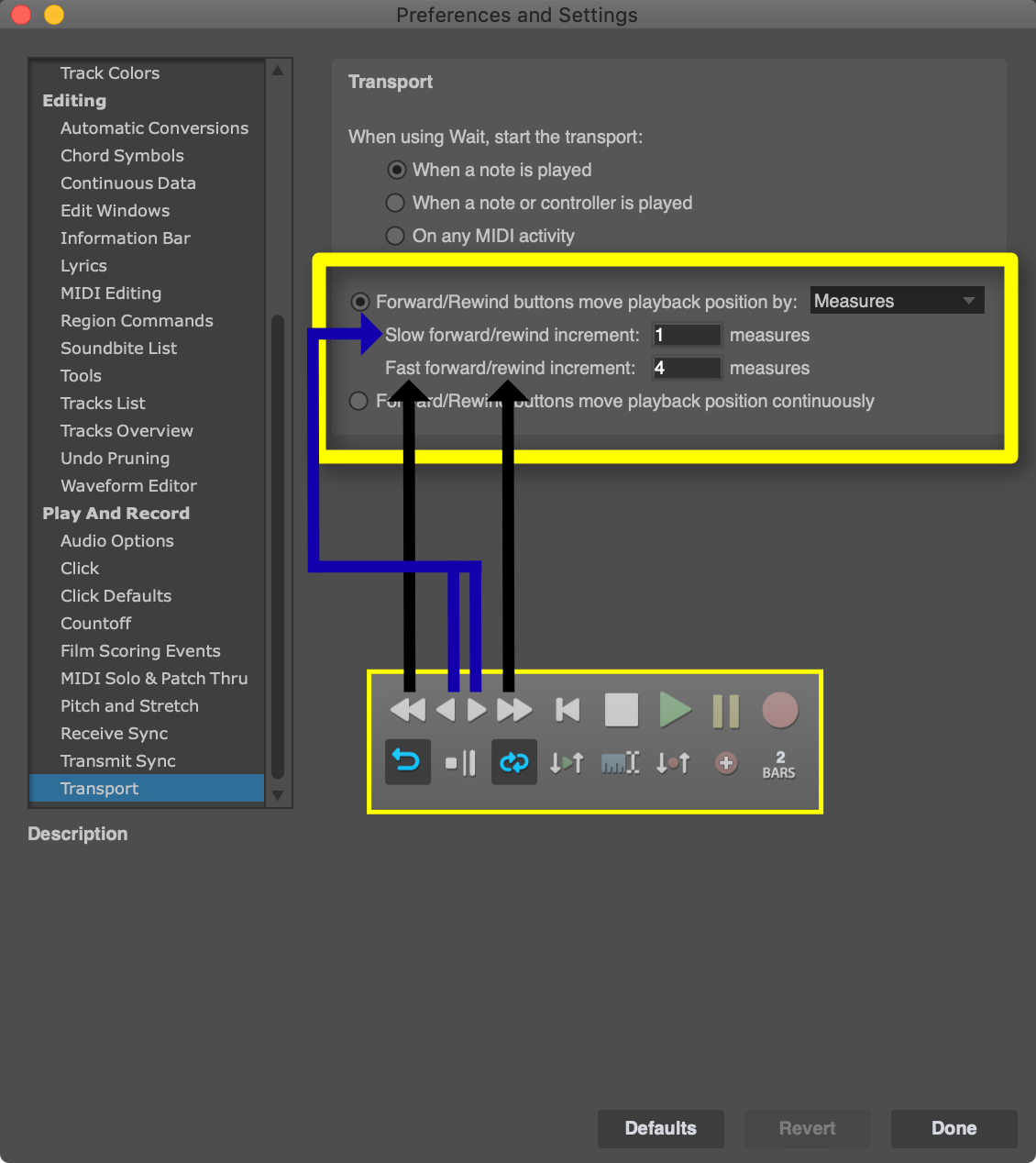 Those little rewind/forward buttons are finally useful! You can configure how far they move, and what measurement they increment in.

This is a feature missing from quite a few products. It’s irritating to zoom in and edit, only to find that you need to mess with a scrollbar to approximate a new location. It just makes temporal navigation in the project much easier. 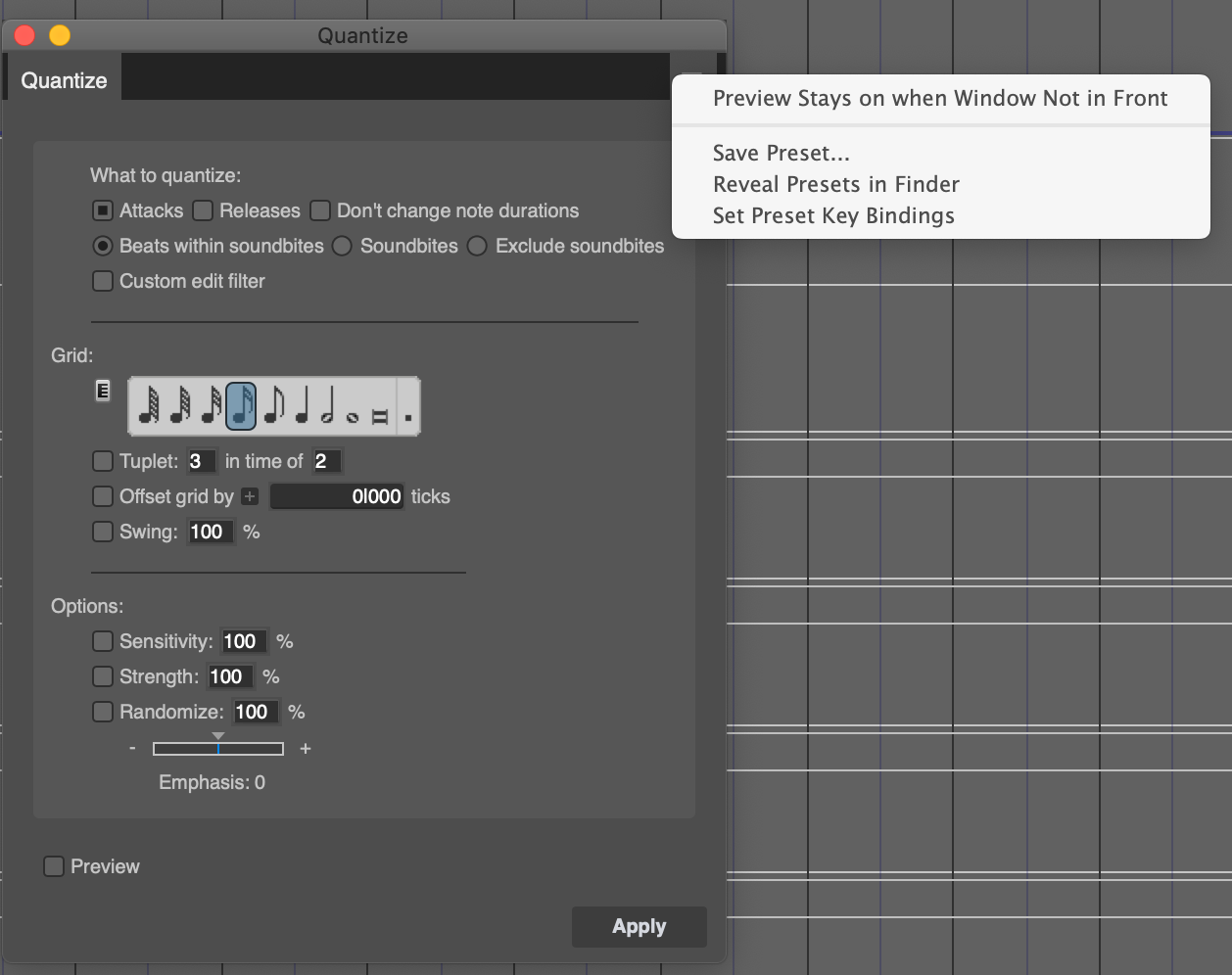 You can save presets for just about any MIDI transformation:

All of these can have their settings saved and recalled quickly and easily.

The kicker is that you can easily assign a shortcut to a preset. Now any sort of common transformation (or data creation!) can quickly be recalled.

This is a HUGE feature.

I’ve listed this as a “minor thing”, because I personally think it’s not useful for your average person. When you zoom the GUI to be larger, then you have lost screen real estate. It doesn’t in any way fix the issue of DP having small GUI elements. It makes everything bigger when you may only want some things to be bigger.

That said, I can see it being particularly useful on very large displays. I already use it that way.

It’s still a great feature to have.

There’s a nice new info box when dragging a soundbite!

It also follows your time ruler’s measurement format. If you work in frames, then it shows frames. Samples, Time and Bars/Beats as well.

Some DAW users will roll their eyes at this thinking “We had this for DECADES!”

DP users get it now. Rejoice. It’s a workflow boon.

There’s 5.5gb of loops and sounds and stuff.

I really don’t care about them, but if you do then I’m certainly not the person to give you an informed opinion about them.

The Event List now has filters for quick viewing of data.

I LOVE event lists. Editing in the event list is the way to go for precision and persnickety tasks.

Nothing was more annoying in older versions of DP than working with time delineated things (loops, memory markers (timeline loops), quantized MIDI, etc…) and trying to get the playhead to the correct place: right on the beat.

Now it snaps to your current snap preference for any measurement size or division. Much better workflow!

EWWWW, what were you thinking? 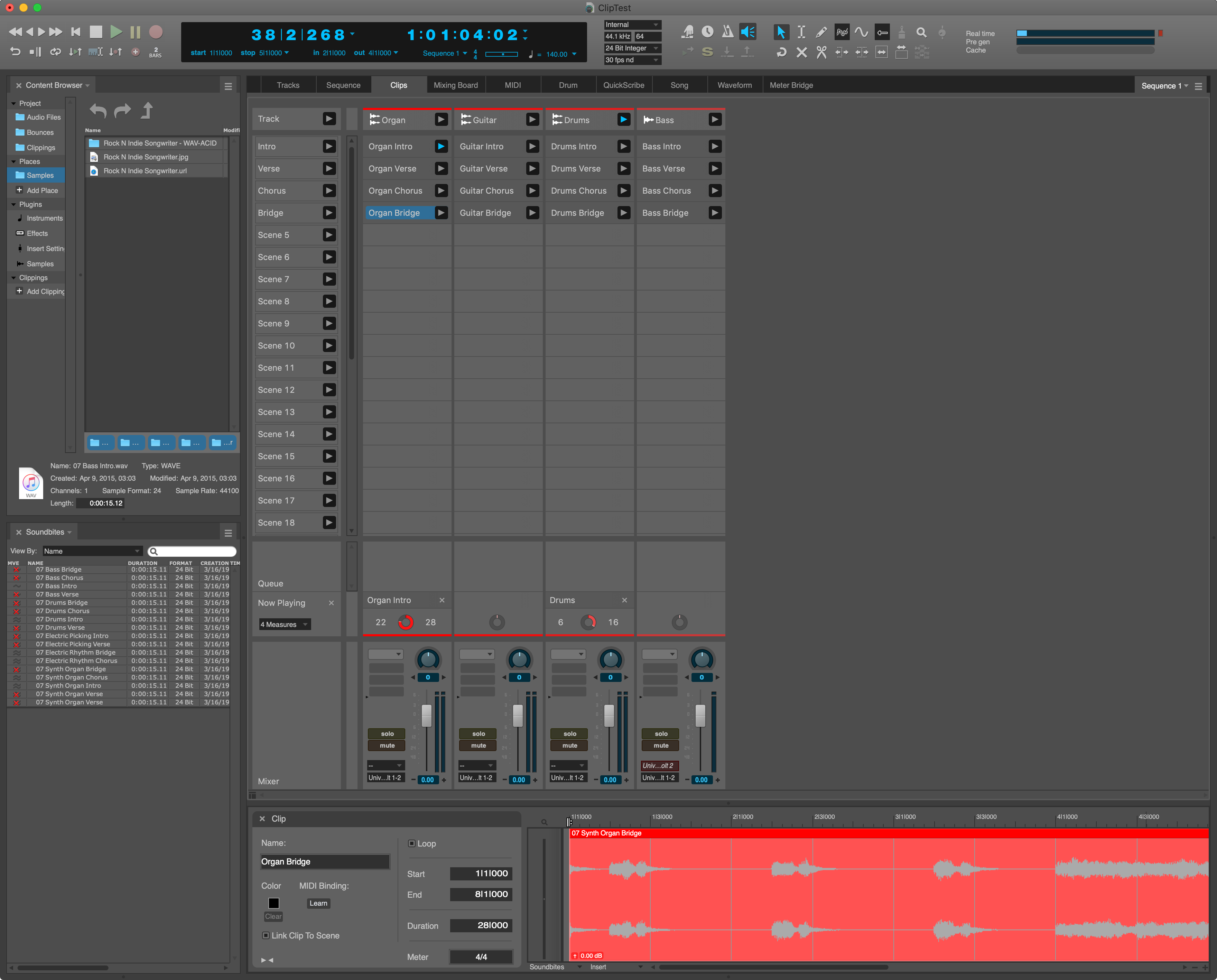 Let’s talk about all the things that you can’t do in the clips window!

When you drag in a clip, it’s not automatically selected in the editor below.

What does the Clips Window do well?

The clips window is only mildly exciting if you are running live shows and need a soundboard. If you have ever used FLStudio, Live or Bitwig then you will be *severely disappointed. 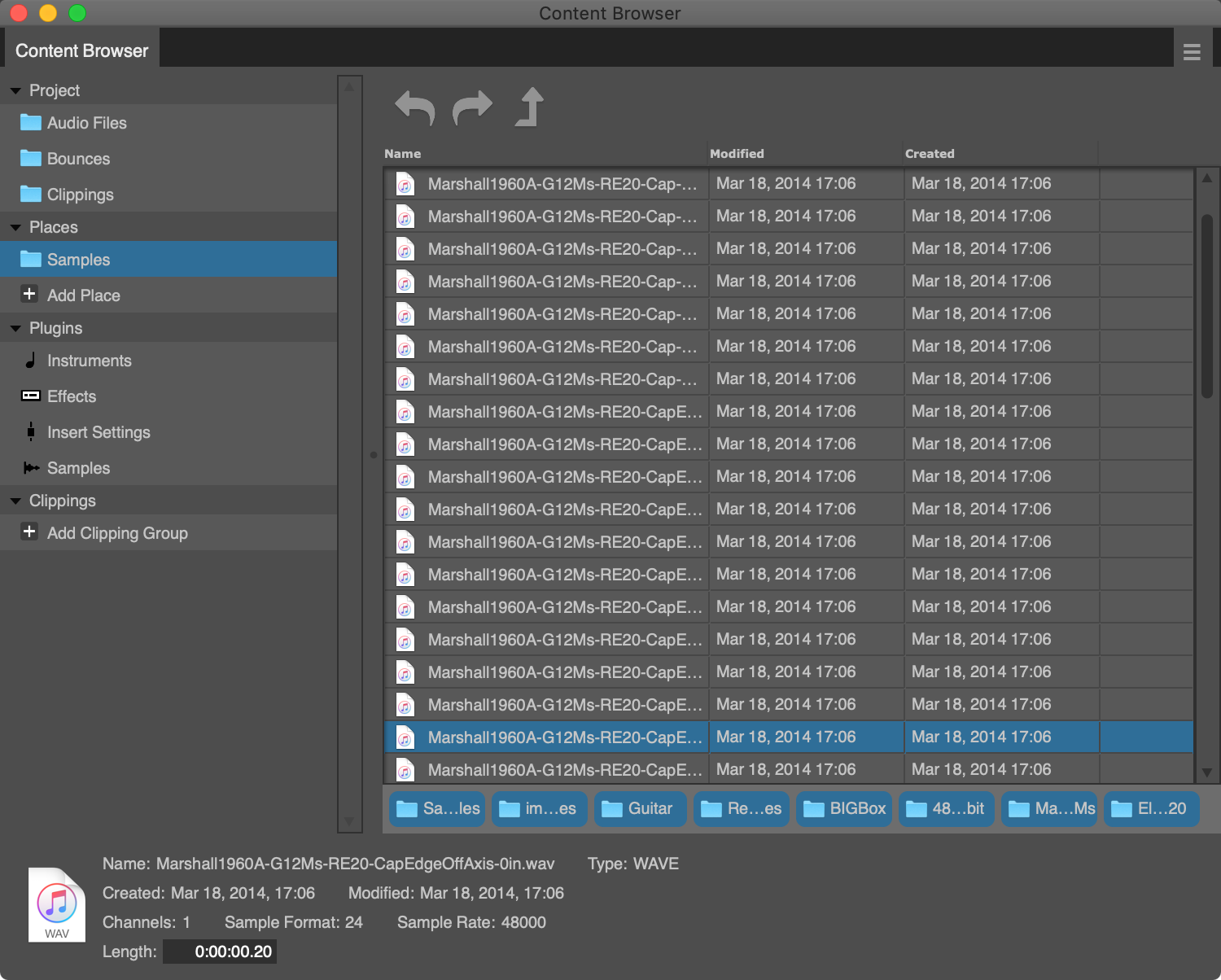 Digital Performer has rightfully had a vocal contingent that disliked the absence of an integrated browser.

Now they have something even worse than the OS’s integrated browser! Hooray!

Let’s talk about what you can’t do:

What CAN you do?

As you can see in the screenshot, the information at the bottom is cluttered and difficult to read (white on grey?).

Window’s Explorer and macOS’s Finder are vastly superior to the Content Browser in DP10 other than the CB’s ability to dock it in the main window.

I understand that maybe there was pressure to add a feature like this, but it’s half-cocked and quite a poor show. I don’t understand how people at MOTU weren’t embarrassed to put this out! Even the DAWs that people make fun of as “toys” or “hobbyist” products have significantly better browsers! Even the text editor I’m writing this in has a vastly superior browser! Maybe they thought that they needed something to go along with the Clips Window, but that’s not the greatest reason, obviously.

Every single DAW on my system has a better browser. EVERY single one. If I had Audacity installed then at least DP would win over that, because Audacity doesn’t have a browser. Wait, I take it back, no browser is an improvement.

I know MOTU knows what I think about this already, but c’mon guys. What a shame.

Most of these things are not a big deal to users of other DAWs. DP10 has largely been a quality of life improvement for existing users. How many people can say that about their DAW’s updates? “Yay, they made my life better instead of adding random stuff I don’t care about!”

Not many people can say that. (Image Line does great at this though!)

The content browser is in an unfortunate state currently. The Clip Window is not what it appears to be, or much of anything really. Let’s just assume these features don’t exist at all.

When you take what was added, it’s still a really great update. Yes, it’s mostly features that other DAWs have, but now DP has them. Do other DAWs have chunks? A huge variety of MIDI tools? An easy way to work in a huge project and the tools to navigate those projects? Project-wide logic-based search Five types of MIDI editors (two of which are notation), one of the best stock plugin selections, ZTX, a proper meter bridge, POLAR, clippings, offline branching undo, fine-grained track grouping, possibly the best sounding automation, OMF/AAF support, Support that might actually respond to you, video support and…

Yeah. Every DAW has a selection of those features. DP has them all.

That’s not to say that DP isn’t without some faults, but it certainly has had a leg up on other products for a long time in many areas.

It’s easy to see this update as DP playing catchup, but I’ve always felt DP was a jalopy that somehow was just behind the head of the pack. They’ve fixed it up that beat up old clunker and in the last 3 versions it’s starting to break to the front.

Hopefully in 10.5 we see some major updates to two certain features though :)

This post took 14 hours to research, screenshot, write and edit. If you appreciate the information presented then please consider joining patreon or paying me for my time spent bringing you quality content!