I sure don’t type all that out! I have it partially automated. I have a script that does a lot of this for me.

Let me walk you through how I use Tesseract OCR, ImageMagick and Regular Expressions to do the heavy lifting for me. I will walk you through the individual steps of how I process screenshots with OCR, but not the creation of the script that does everything for me.

This post assumes that you are on a Unix or Linux distro. This can be done on Windows, but I won’t be covering that.

Note: If it’s not obvious, I’m buying a bit of time for my Logic Effects and Instruments reviews again. They’re coming, but it’s a lot of work!

I’m using macOS, so for me it’s as simple as typing the following commands in the Terminal.app program (or your preferred terminal):

If you need to know how to get the brew command installed, then check out this other post. Go to the ‘For Newbies’ section and follow that until ‘homebrew’ is installed.

The first steps are to capture and process the images.

macOS by default adds drop shadows to screenshots. Turn it off!

That’s all you gotta do. Now you get nice clean windowed screenshots with cmd-shift-4 followed by space and clicking the window. 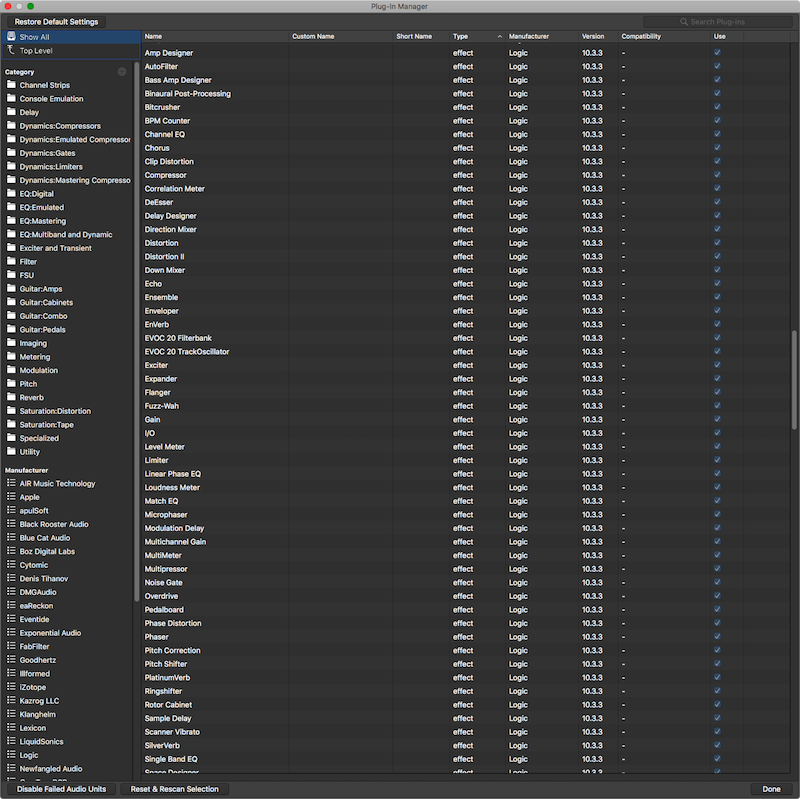 The next step is to capture the list of Logic effects list as an image. Here are the steps I use

The result is the image that you see above. I do this twice with the plug-in manager scrolled so that I have an image of all of Logic’s Effects.

I rename the files to DAW1.png DAW2.png etc… First I move all my screenshots to a new folder.

Before I append the images, I crop the areas that are fixed: The title bar and the buttons on the bottom. This is done with the 2 following commands: 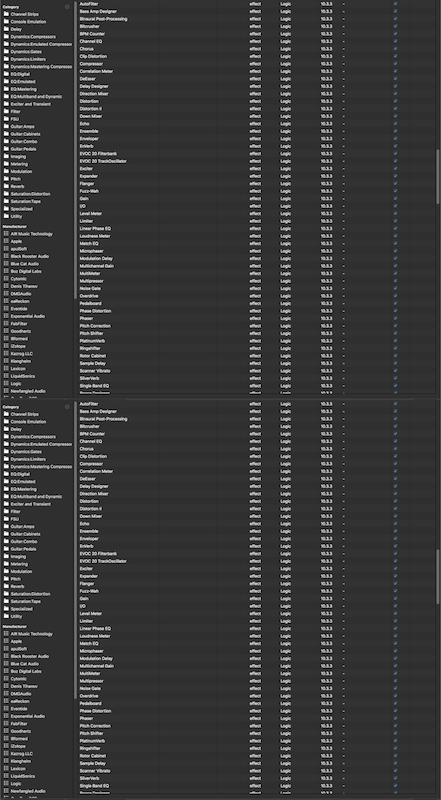 I have 2 or more images now that I need to append. They are on my Desktop. Here’s how I append them:

Now you have a single image vertically appended.

Tesseract works best at about 300dpi, and we can use imagemagick to resample our image to 300dpi with this command:

Now we run an OCR tool that converts this image to text.

The result is a bunch of text. If you browse through it though, you’ll see that there’s a section where all of our effects column was translated!

Now this data needs to be formatted.

First I pull out the appropriate information from the tesseract OCR that I ran, and I fix any minor mistakes in the OCR.

I think there was only 3 mistakes that I had to fix.

This is also a good time to replace \n\n with \n.

First let me explain how my Jekyll Blog works

The format that I use for images is as follows:

I have a style that causes any bolded text after an image to appear as a caption. I am changing this in the future, but right now that looks like this:

In vscode I use a snippet to create that by typing ‘img’ and tab:

Now I use Regular Expressions replacement to format the RAW data to a blog post. If you don’t know how to use regex in your text editor then go to regex101, select javascript, put the RAW data in ‘test string’ and open the substitution at the bottom.

I don’t like spaces in my file names so I then run another regex on the result:

I have a script that does the image processing and OCR for me, which I leave as an exercise to the reader. This is how I get lists of things from DAWs and make these long review articles!

It’s still a lot of work to screenshot all of the plugins in the DAW though. There’s no easy way around that that I know of… yet. I have a program that will generate screenshots of a directory of VST or AU plugins, but that doesn’t show the DAW’s native window nor does it work with most stock plugins.

Generating these lists of plugins generally take me about ~5 minutes total. Usually the most work is editing small issues like /’s in the plugin name (such as I/O).

You’ll see what this looks like on the blog soon!

This post took 2 hours to research, screenshot, write and edit. If you appreciate the information presented then please consider joining patreon or donating!