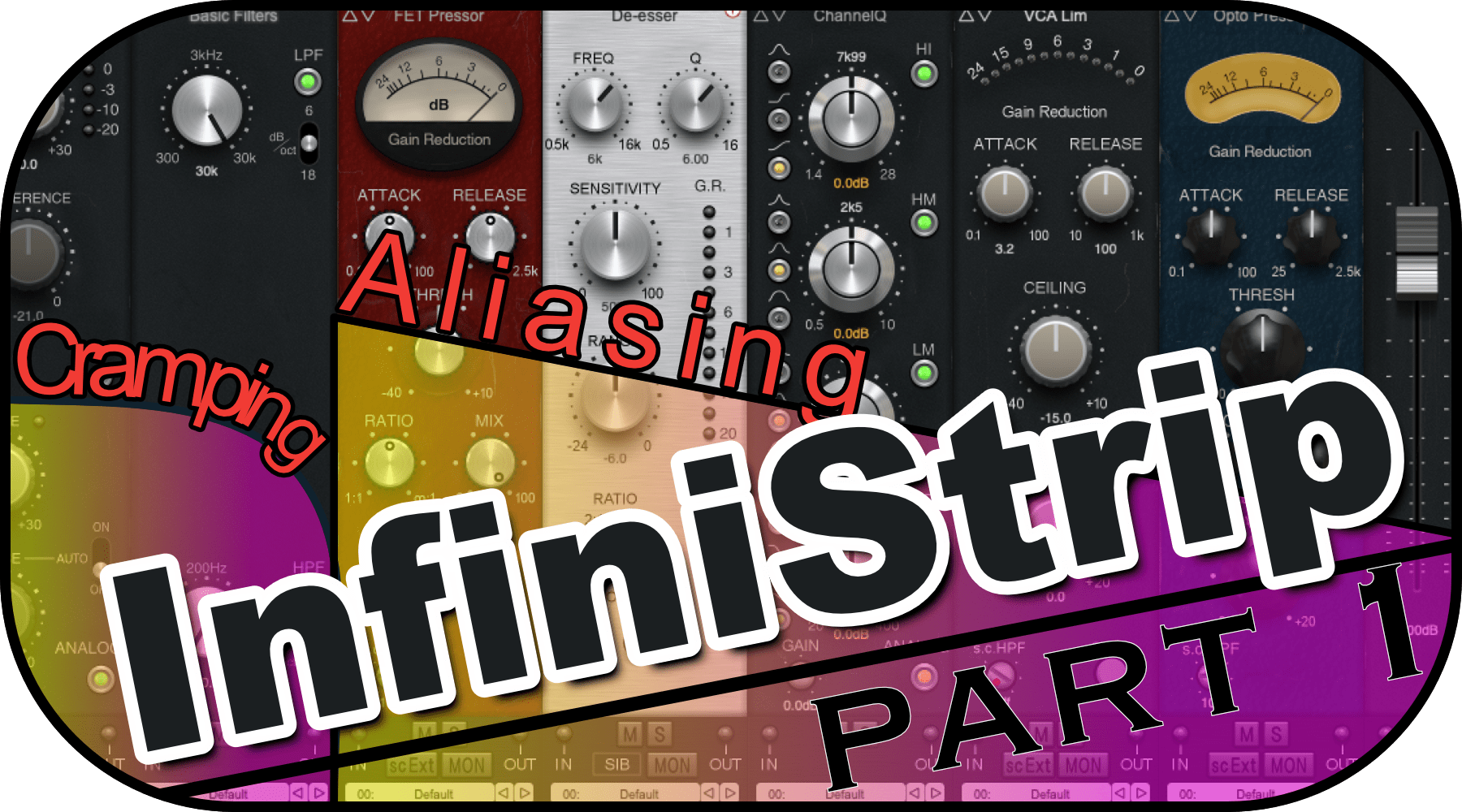 I’ve been working with this plugin for about 7 weeks, foiled twice by circumstances while trying to get this review out.

Wait no more. With part 1 of this review, I’ll be reviewing some of the controversy surrounding it and other plugins.

DISCLOSURE - PSP kindly provided this product to me for free as an NFR for review. If you believe this has biased this article, then I encourage you to call it out in the comments. Other posts in this series

If you’ve followed discussions about this plugin then you’re familiar with these 2 complaints.

PSP has offered what I feel is an a potentially indefensible reason for this: the plugin is meant to be zero latency, and most users utilize higher sample rates.

BUT, many other plugin designers have managed to overcome these issues and produce fantastic products with oversampling or with tricks that reduce the need for oversampling. Along with that, filter cramping can be largely alleviated with no added latency at the cost of phase response.

I’ll be discussing these points, and providing both visual and audio content to help you decide if these tradeoffs are worth it.

I’ve been harsh on products before for these two side effects, but there’s more to it than pretty graphs.

I believe that technical considerations need to be known, but they do not need to interfere with experience. i.e. know how your tools work, but use them how you see fit.

I have my DAW v DAW series where I talk about technical differences between products. Often readers/viewers see these and come away with the idea that I think one product is suddenly inferior and totally unusable because it has a deficiency in one area compared to others.

Every tool has tradeoffs and deficiencies at some level. There is no magic bullet.

It does pay off to know these deficiencies or caveats so that you can work around them or work with them to further the goals that you’ve set for your project. This applies to all tools that you use, including plugins

If InfiniStsrip claimed to be a circuit model or emulation of a specific hardware product, then aliasing and filter cramping would be not only false advertising, but a sizeable detraction from the total review “score”.

InfiniStrip does not claim to emulate or model any product. It’s an original creation. Within that context the question becomes, “How audible is the aliasing and cramping”?

The result of aliasing is that any signal generated by the processor (plugin) that exceeds 1/2 the sample rate will be reflected back into the audible spectrum. “Mirrored” so to say. This content is inharmonic. The reflected content is no longer a multiple of the signal that it was related to before being reflected.

Inharmonic content is “not musical”, and aliasing is one of the major reasons that digital processing gained a bad rap early on. (Along with other factors of course!).

The proportion (or even existence) of each specific harmonic is not 1:1 with the original signal. Generally they decay in amplitude.

Most distortion causes harmonics that decay in amplitude for each iteration. By time we get to 25,600, the level is fairly low. When it’s reflected the amplitude is unchanged.

Hopefully the animation above shows this relationship between the harmonics, mirroring and resulting amplitude.

Depending on the distortion these aliased components may be nearly inaudible or masked by musical content.

If you were to walk away at part 1 then you would believe that aliasing isn’t a big deal. The aliasing is such a low level, and it’s up near the inaudible (for your average adult) frequency range.

Unfortunately, music is made up of more than a single 100hz sine. Let’s try again, but with something around 10,000hz. Still in the easily audible range.

If we assume the same type of distortion then something far more destructive occurs. The aliasing extends below our original signal, and retains an audible amplitude above and below. In some circumstances the aliasing may even directly overlap with our original signal (but with a different envelope!!)!

Now we have a significant amount of inharmonic content around our original signal.

Infinistrip doesn’t alias that much, but that’s not to say that there isn’t some inharmonic fun bits happening.

The InfiniStrip settings are extreme. I don’t think anyone would run the 80s pre-amp at such high input levels with drive set to max. That’s beyond crazy.

However, the most obnoxious aliasing artifact in this result is already slightly below -90dBFS. The presents of a few dozen other inharmonicities makes the overall sound more unpleasant than the amplitude of a single component would indicate. The aliasing at 48,000hz sample rate is audible.

Writing about it is useless though. We need to hear it. Here’s audio samples with the above pictured settings in all of the pre-amp modes at various sampling rates. (Snippet from Cory Wong by Vulfpeck).

Here’s the best way to listen:

The playback will loop and switch to the next version of the audio file automatically.

All files are normalized to the same perceptive loudness to reduce potential bias.

Now you tell me (in the comments or e-mail audiolabs at gmail) how impactful the aliasing is to you?

Aliasing creates inharmonicities that themselves can turn into more aliasing if you put another aliased processor after it. The number of inharmonicities is increased exponentially, but the amplitude of them is inversely proportional.

The secondary concern is processes like compressor and limiters which will naturally lower source material (as it’s higher level than the aliasing). If you increase the gain to makeup for the compressive action, then you are increasing the inharmonicities.

I’ve not provided any demonstrations of this effect, but it is highly dependent on the processing chain. I could easily create seemingly extreme examples that make the aliasing seem minimal, or craft an example that makes it seem unforgivably terrible. You have to try with your own material and own workflows to see if this matters to you.

Filter cramping is a bit of a complex topic, but it’s easy enough to witness and to explain. Cramping is when the filter’s bandwidth becomes assymetrical as it reaches the nyquist limit.

Watch the Image above for a demonstration of what this looks like.

It is possible to design a filter that is “decramped”, so that the frequency response matches what you’d expect if the nyquist limit was a wall that the filter just slides behind, rather than is squished by it.

So now you have a choice between analog-like frequency response, analog-like phase response or you can get both by oversampling. Increase the nyquist limit and you can put the ‘cramping area’ well above the audible limits.

Oversampling itself imparts a sonic signature, and there’s a variety of implementations with their own tradeoffs. The oversampling process also changes how processors like compressors react to the signal, thereby changing the sonic signature of the whole processor (as well as adding annoying latency).

If oversampling provides a benefit then we have a fourth option: working at a higher sample rate. Assuming that all of your other plugins work properly at higher sample rates, you have the processing power, and your hardware supports it properly then this is an ideal solution with no downsides :)

Let’s ask the question though: if the only consideration is sonics, then how audible is cramping?

The video above demonstrates the cramping present in InfiniStrip itself. With a 15khz filter there is a visual “cramping”, and if we jump up to 96khz the cramping disappears.

As discussed before the filter can be de-cramped at the 48khz sample rate (with the tradeoff of the phase response also changing). If the designer wants the most audible “analog” feel then cramped filters would offer the ideal solution… IF the frequency response issue (cramping) was less audible than the phase response changes.

I’ve applied a not-cramped linear phase cut to the signal. InfiniStrip was then used to compensate for this at both 48khz and 96khz (and then downsampled to 48khz).

This isn’t a “definitive” test by any means, and there are some very minor artifacts caused by the compensatory filter (especially since I wrote it).

However, this simple presentation should give you an idea if the filter cramping matters to you in the context of a full mix.

This mix doesn’t have a lot of high end, and I feel it’d be disingenuous to stop here, so let’s try something more extreme.

Next on the list is a simple high pass filter on the mix. I took a drum track I had lying around and applied a 12.3khz low pass filter from the “Pro Filters” in IfiniStrip.

This setup is sufficient to demonstrate the filter cramping, and a drummer bashing on cymbals should be a sufficiently musical representation of “lots of high end”. I also boosted the cymbals a bit to make the demonstration more audible.

(I know it doesn’t “sound good”, I’m intentionally trying to create an extreme example to the benefit of filter cramping being potentially problematic)

If I’ve convinced you that Aliasing and Filter Cramping don’t matter then you should stop here. TRY IT YOURSELF.

They matter. They are the results of tradeoffs in design and potentially the result of poor design.

In the context of InfiniStrip, I think there is a case to be made that the tradeoffs are not accidental. PSP is a well known developer that has made many products with anti-aliasing measures and de-cramped filters. The demonstration of competency along with their stellar reputation would justify further investigation into the tradeoffs.

Given that they’ve made no claim of emulation or model, criticism regarding “accuracy” or “faithfulness” can be cast aside.

PSP has publicly given reason for the presence of these side effects. Whether you accept them or not is up to you. A reasonable person would use the product in a variety of circumstances and decide if these phenomenon outweigh the benefits of the product itself.

I find it difficult to accept PSP’s rationale. Many developers have managed to create channel strips that use various tricks to alleviate aliasing and filter cramping. It’s clearly possible to accomplish this with the same design constraints as PSP claims they’ve put upon their product.

The next step is to listen to the product. I can say that after 7 weeks of intensive use, I’m a big fan of InfiniStrip. I’ve used it without thought to technical considerations and I did not once think about filter cramping. I did encounter a handful of scenarios where aliasing was bothersome in a 44.1khz project with extreme InfiniStrip settings, but I know of no other low-CPU, zero-latency channel strip that would perform well in a similar scenario.

I’ve not listened to ANY of the comparisons I posted. They were setup using various measurement software to ensure the correct parameters were used, and I kept my speakers muted to try to avoid bias. I will not have heard these examples until I publish the article. It’s possible that some bias slipped in, but I hope I’ve provided a wide range of examples and information about the examples for the listener to judge.

I do wish that PSP would add at least a 2x oversampling option for scenarios where extreme saturation is used, but those scenarios are relatively rare and I can simply use my favorite saturation plugin anyway. It’d be a hit to convenience, but we all make those choices everytime we load up 5+ plugins on a channel anyway :)

In short: Aliasing and Filter Cramping are real side effects of certain processes. They can be design tradeoffs, or incompetency. Sometimes they’re audible, and sometimes they’re not.

Accurate information interpreted correctly and applied to the right scenario is powerful. I hope that I’ve provided information that you can use to make better decisions about your purchase, or distaste of, InfiniStrip.

If you feel this article was unfair in some way, please let me know!