Today I’ll be covering a difference that really annoys me: Automation smoothing. 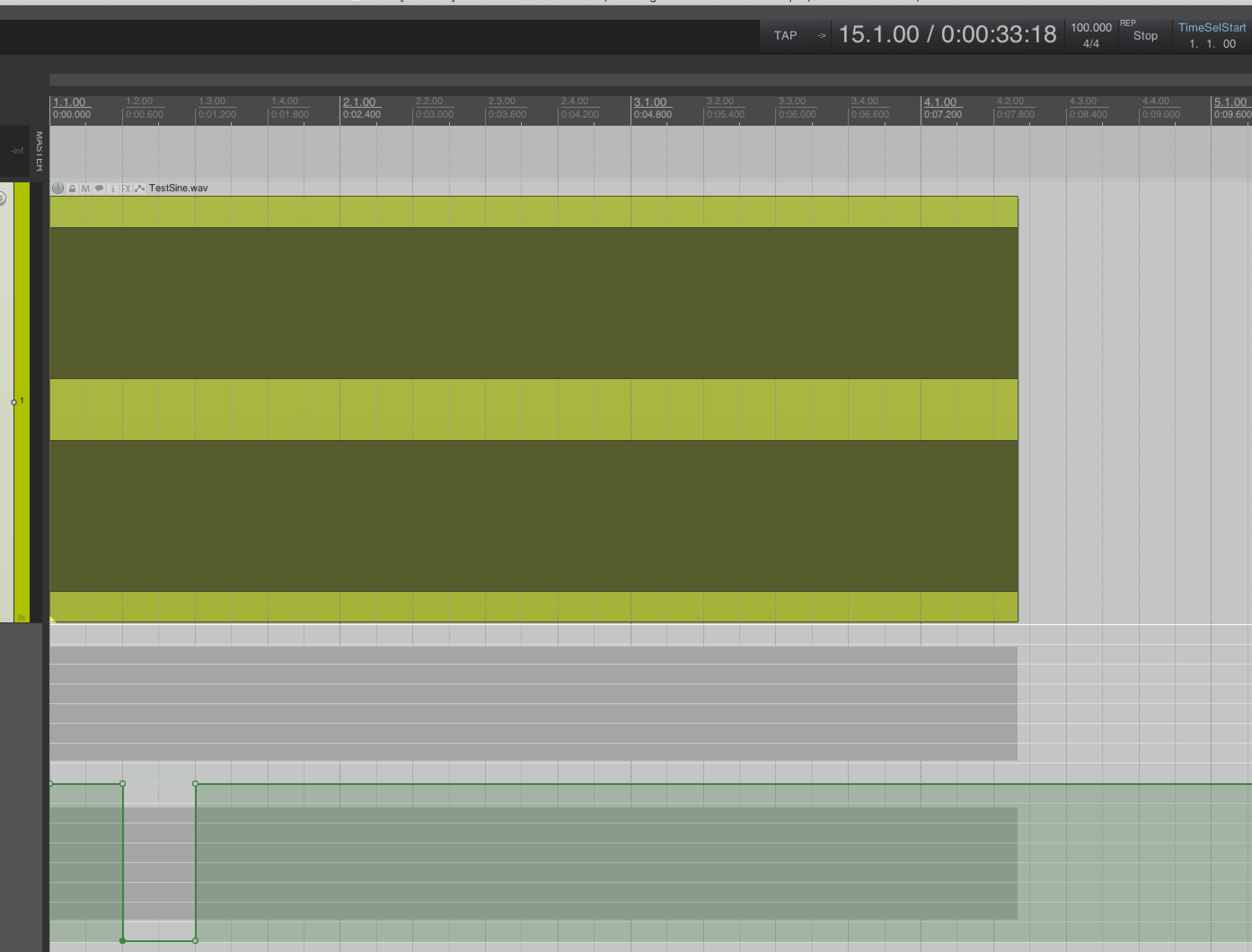 The goal is not to abruptly jump. The goal is to do so without any significant artifacts such as pops/clicks. A fade is desirable, but a very quick interpolated fade.

Why? Because no DAW in these tests shows a fade. It should render what you see.

This can be verified with a high-overlap, large-window FFT as well as visual inspection.

Not all DAWs have done sample-accurate updates for automation data. For many years the standard was to update automation every once in a while, then smooth that value.

(Remember that a ‘stairstep’ signal can be represented by a sum of harmonics, if you filter the harmonics then you are left with the nice curvy fundamental sine wave. That’s why filtering yields a smooth signal from a “stepped” one. This is the (same concept that all of your digital-to-analog converters use)[https://en.wikipedia.org/wiki/Nyquist–Shannon_sampling_theorem].

The downside is that aliasing is possible, and so are signals that are exactly fs/2. This can result in a ‘straight’ automation signal that is rendered as a wobbly sine. Fixing this adds another layer of cpu intensive operations or a carefully tuned filter along with sample-accurate value updates.)

Creating an interpolated automation signal that will provide clean automation at a sample-accurate rate is not easy, and for many years it was somewhat CPU intensive. It’s 2019, sample accurate volume automation isn’t an issue. It wasn’t even an issue in 2005. (but wait… 2009?. You’ll see.)

What you’re likely seeing below in the not-awesome results is residuals from that era: automation being chunked, then smoothed.

Simple updating each sample’s value every sample yields “better” results, but requires that the automation signal is filtered to avoid any aliasing in the modulation signal.

This concept will become even more important when investigating other automation functionality.

I’ve ordered my results from best to worst with commentary.

I wrote a short program to render the wave files at the desired points: 28,800 samples and 57,600 samples. There are two images side-to-side: Automation from 0dB to -Inf on the left, and automation from -Inf to 0dB on the right.

Every image is showing a 1600 sample window. That means 800 samples to the left of the desired cutoff and 800 to the right. (one exception to this)

In order of how easy it was to setup these tests:

This doesn’t tell you much other than how easy it is to set an automation point to an exact value, and at an exact position.

Once again Pro Tools is king. The fade is <0.5ms and it’s a complete fade that ends precisely on the transition point.

Reaper is second place to PT only because of a slightly slower fade. Open the images in separate tabs and ctrl-tab back and forth. You can see that the waveform fades quicker in the Reaper example. 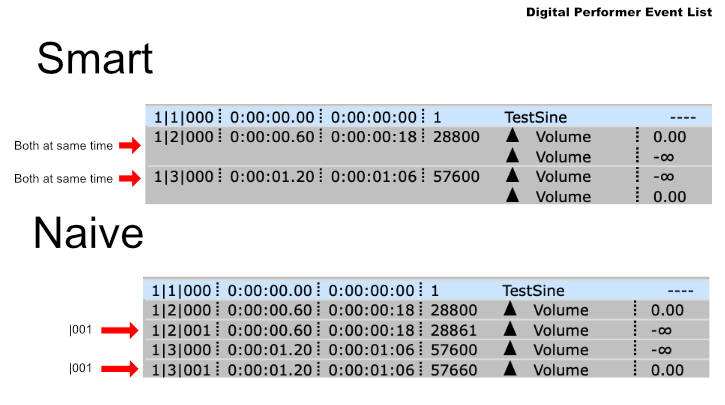 Digital Performer has a fade that’s only slightly slower than Reaper, but there’s a gotcha here.

DP doesn’t have easy automation snapping, so it’s easy to end up with two points that separated by a fraction of a time division. The other side of this is that DP also has the easiest way to precisely set automation: the Event List.

Open the Event List and make sure the automation points occur at the same time and you’ll be rewarded with excellent results.

Here begins what I’d consider to be “deficient” products, everything including and below Live.

I believe that this is preferable to Cubase’s method.

Cubase always fades from the previous value to the next. So if you were trying to “mute” a section like in this test, then there will be initial leakage, and the beginning of the next part will be cutoff.

Waveform is late on automation for some reason.

However, even though it’s late, it’s still better than everything below.

If you’ve watched this series then you’re aware of Logic’s 5ms automation fades.

It’s also difficult to get the points exactly where you want them to compensate for the fades.

Annoying, but it’s been like that for over a decade. 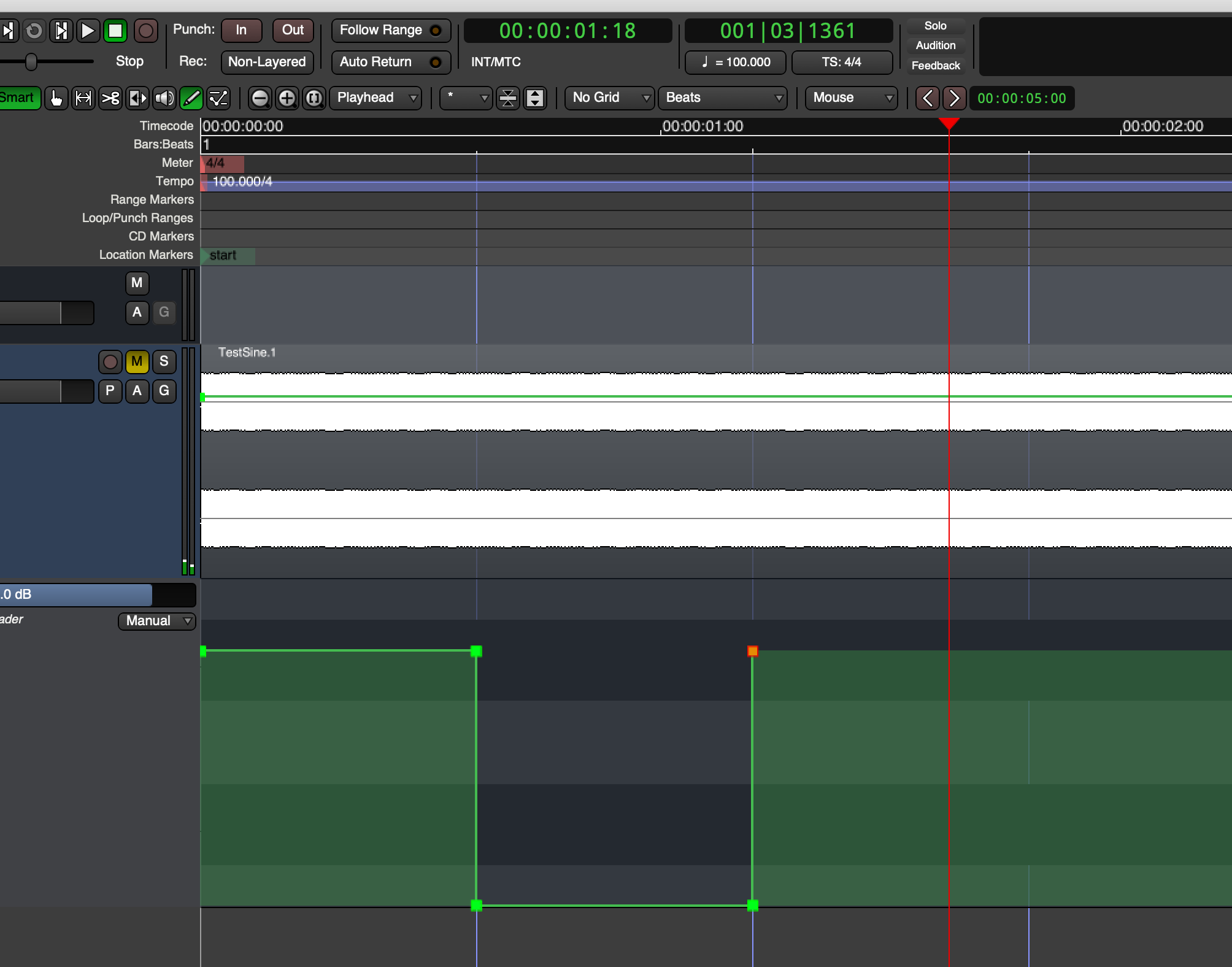 Ardour is slow, but in both situations. 20ms+ fade.

However, Ardour is consistent, and setting points to where you want isn’t terribly difficult.

Bitwig handles the fade to -Inf ok, however the transition from -inf to 0dB is terrible.

The interface shows an abrupt transition from -Inf to 0dB, but the rendered audio is a 20ms+ fade. Totally unacceptable.

I hope they notice this and get it fixed.

Let’s take a huge fade time and make it inaccurate. Welcome to FLStudio.

I’m fairly sure that this has to do with point priority regarding snapping. If there’s a way to consistently determine which of two points snapping to a point takes priority, then I could not find out how. (though, I didn’t try very hard… why should anyone have to try for this nonsense?)

25+ms fade in both directions and difficult to create accurate or precise time values.

Studio One Zoomed Out 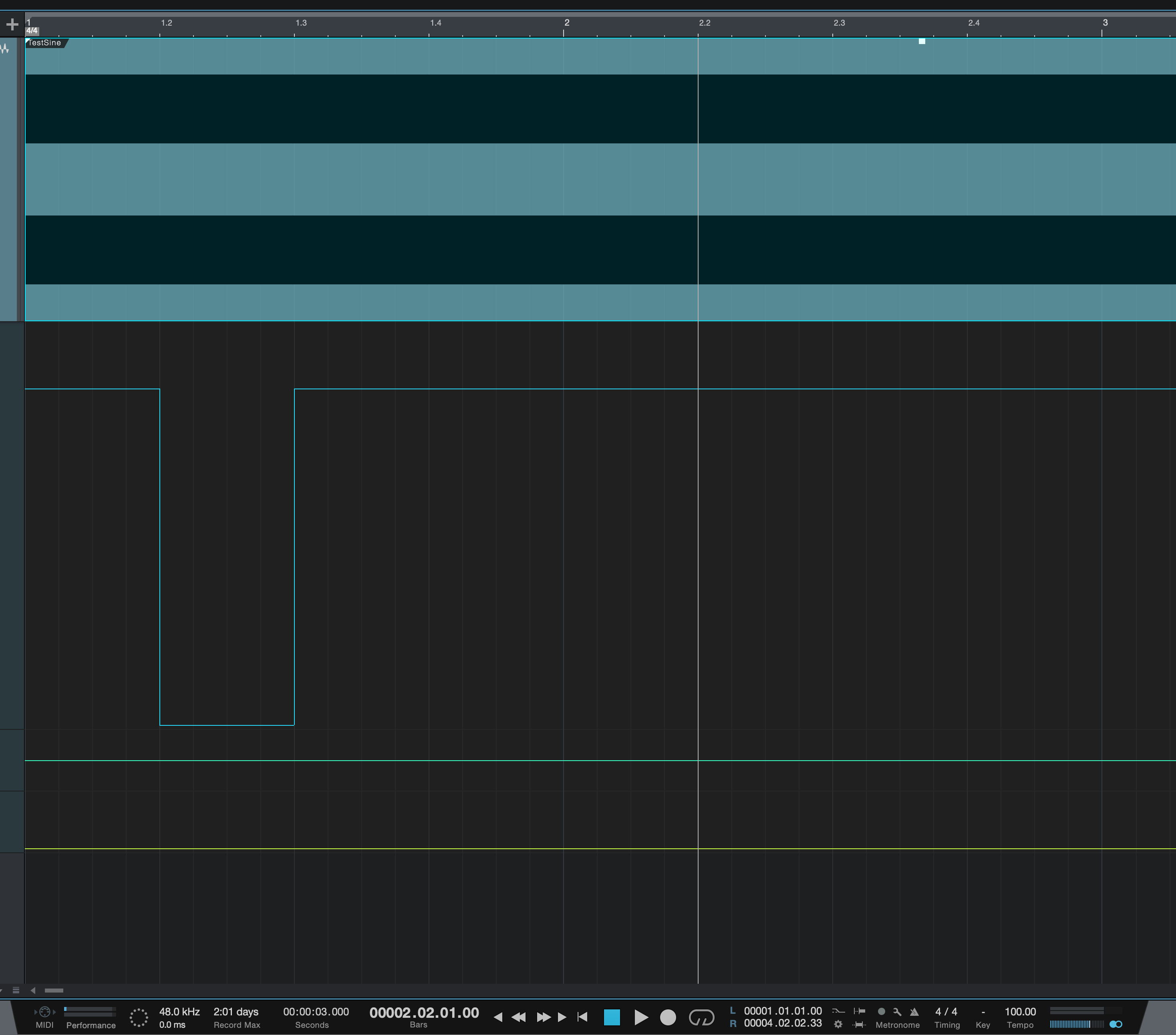 Yes, it gets worse. Unsurprisingly it’s the reigning champion of sucking at automation: Studio One.

Studio One already had some problems with automation, but this takes the cake.

I had a sneaking suspicion something was up. I have projects with this type of automation that work just fine… I thought.

Studio One 4.1.4 has excellent automation fade time in this regard, but it had that distortion for all automation.

Version 4.5 fixed the distortion, but it broke this.

DO NOT TRUST ME. Try this yourself. It’s really easy to setup, render and then inspect the render in your DAW.

Does this matter? YES. This can affect when/where you put your automation and the results. It’s especially important for dialogue automation where leaking room tone at the end of a phrase can sound unnatural. Similarly important when working with heavily distorted guitars, live drums, synth patches with reverb etc…

Should you drop your DAW over this? This time… maybe. It’s pretty important.

If you use Studio One, please send a very polite angry letter. If you’re reading this Presonus, feel free to contact me. audiolabs, gmail.

This post took 49 hours to research, screenshot, program, screencast, write and edit. If you appreciate the information presented then please consider joining patreon or paying me for my time spent bringing you quality content!

«  Everything I like about Ableton Live DAW v DAW - Part 4: More volume automation »
If you appreciate the information presented then please consider joining patreon or donating money/time