You might be aware that I ‘was’ a big fan of REAPER, and I amassed a somewhat ridiculous configuration which I’m not even particularly happy with anyway!

REAPER 6 came out and I thought it was a disaster, largely the GUI. I was annoyed with REAPER at this point because of my (over?)use of scripts and their instability. Perfect storm of reasons to move on.

I stopped using REAPER. I’ve been happily using Studio One 5 and Cubase 10/11, with Logic Pro X for any video production (nice integration with FCPX).

I’ve been doing my “30 days” in private. Various self-improvement tasks, depriving myself of things that I think I rely on, 30 days of playing a single instrument, etc… I think it’s about time to do another 30 days here with my readers.

Here we are: 30 days of Starting over with REAPER.

For the next 30 days I’ll be writing articles detailing my journey of starting with REAPER from scratch. Every feature I use, setting I change, script I install, window I move or question I ask on the forum will be logged and explained.

In some form, I’ll aim to answer 2+ questions for every decision:

As part of this process I’ve started a new site feature: DAW Wants. I’ll be using this REAPER-centric series to flesh this out in the context of REAPER, and possibly some other comparisons that I make.

I previously used what’s called a Portable Install. This puts REAPER in a folder, and then the software puts all of its settings in that folder.

The benefit of this is that I could easily sync or move my REAPER installation to another computer. With complex setups this was not an insignificant benefit, but I plan (uh oh) on not having a portable installation. So what will I be doing!?

I like to avoid docking anything at the top of my screen. There’s 4 primary locations to put information: left, right, top, bottom.

The windows that I put at the bottom of my screen change depending on the screenset; most importantly, their height varies.

REAPER’s transport does not like vertical placement, so the remaining option is to move it to the top.

Right click the transport and select Docked transport position->top of main window. The transport is now in a place where nothing will interfere with its position.

Reaper has a feature called screensets. Screensets allow you to ‘press a key’ and re-organize all of your windows. Screensets are located in the View->Screensets/Layouts menu.

I think the default view with the mixer at the bottom of the screen is inefficient. I am either editing audio, recording audio, recording/editing MIDI or mixing. I rarely mix the three. I will create 4 screensets for these tasks so that I have only the necessary information in view. If I want to do something in the other workflow, I can change screensets.

I’m a fan of Studio One and Cubase’s setup where there’s left, bottom and right areas. Each area has specified content available, selectable by hotkey. I don’t have to think much about where something is, as it will always show in the same place.

REAPER’s system is mildly annoying in comparison. There’s a docking system1 that is difficult to use and requires uses of “Screensets” to remember where windows should be (and when they should be there!). I can emulate Cubase or Studio One’s concept to some degree. 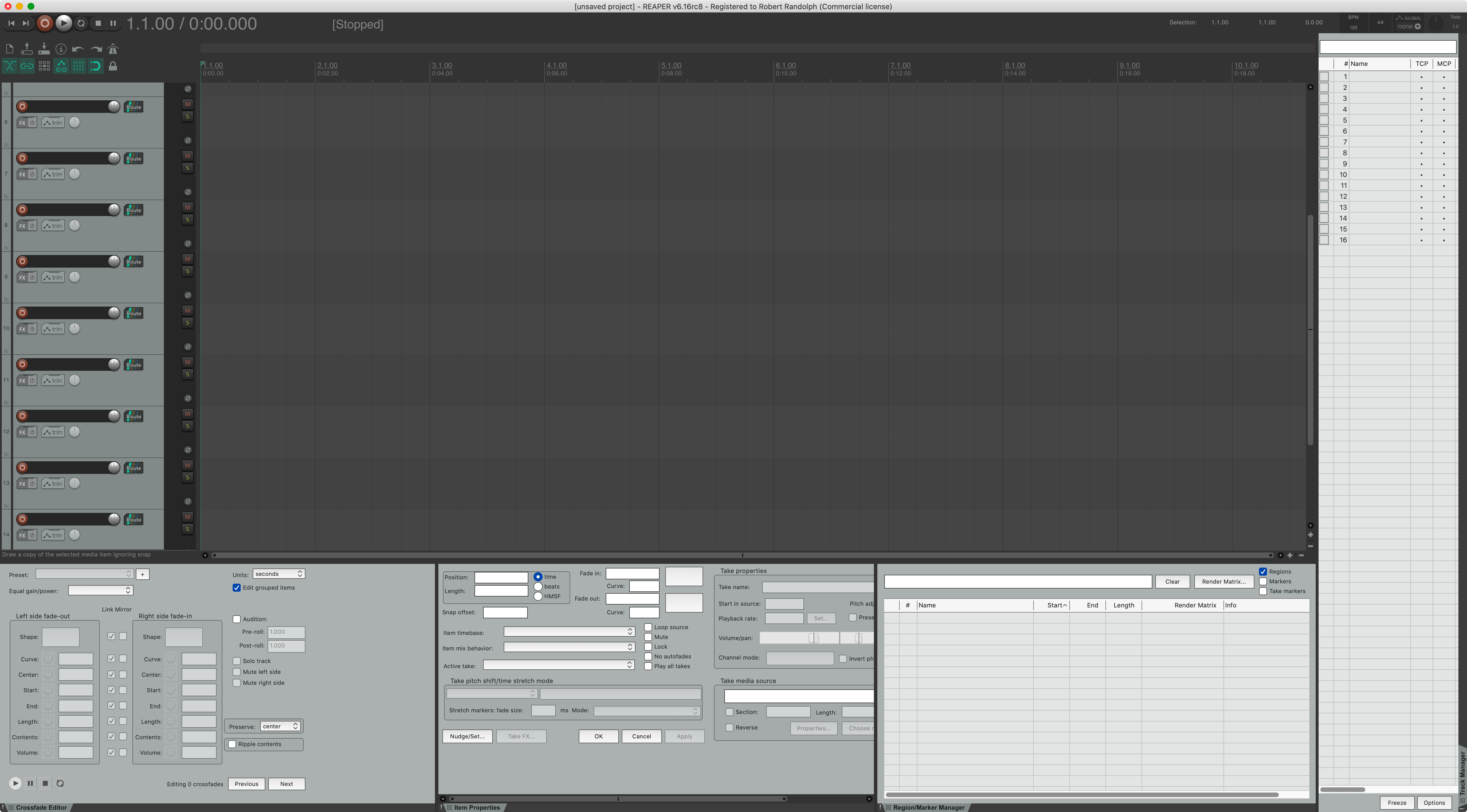 My Editing screen will start out as a large screen of tracks with the following windows at the bottom of the screen:

I use the track manager for finding, displaying and hiding tracks. REAPER combines track folders with track routing (unless explicitly turned off). Usually when I search for a track, I want to see what’s routed into it, or associated with it. This behaviour requires some settings changes: 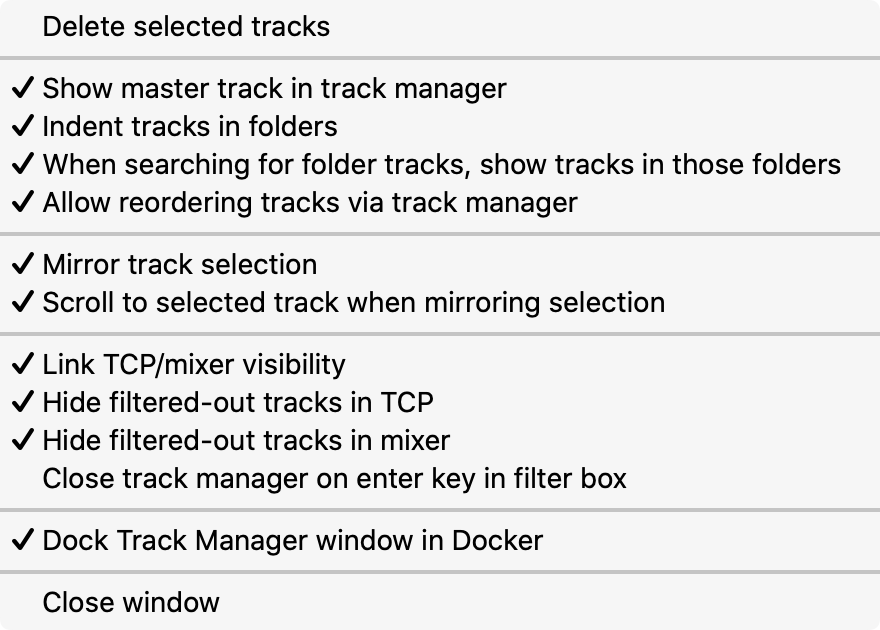 These settings allow me to search for a track and automatically have the found tracks show, along with their children. It also displays the tracks with the same hierarchy as the track control panel. 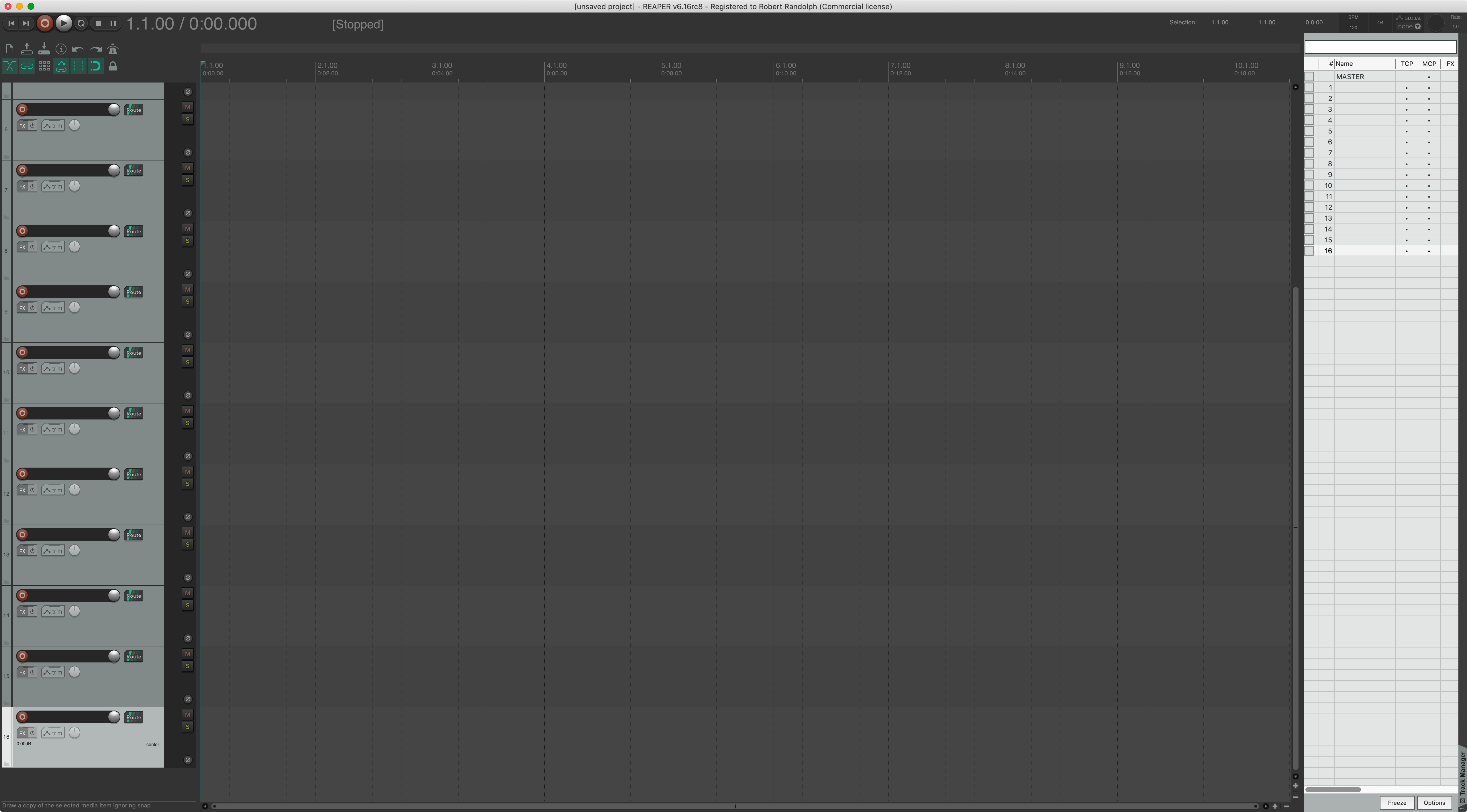 My recording setup is the same as my editing setup, but with the bottom row of windows removed.

My Mixer screenset is fairly simple. I take my recording screenset, add a mixer at the bottom and pull it up fully.

I retain the mixer in the dock so I have a single window and I still have access to the timeline as seen in the screenshot. I don’t like to switch between windows, or look side-to-side between mixer and another window to locate where I am in the project. I don’t know of any other options except for this setup. 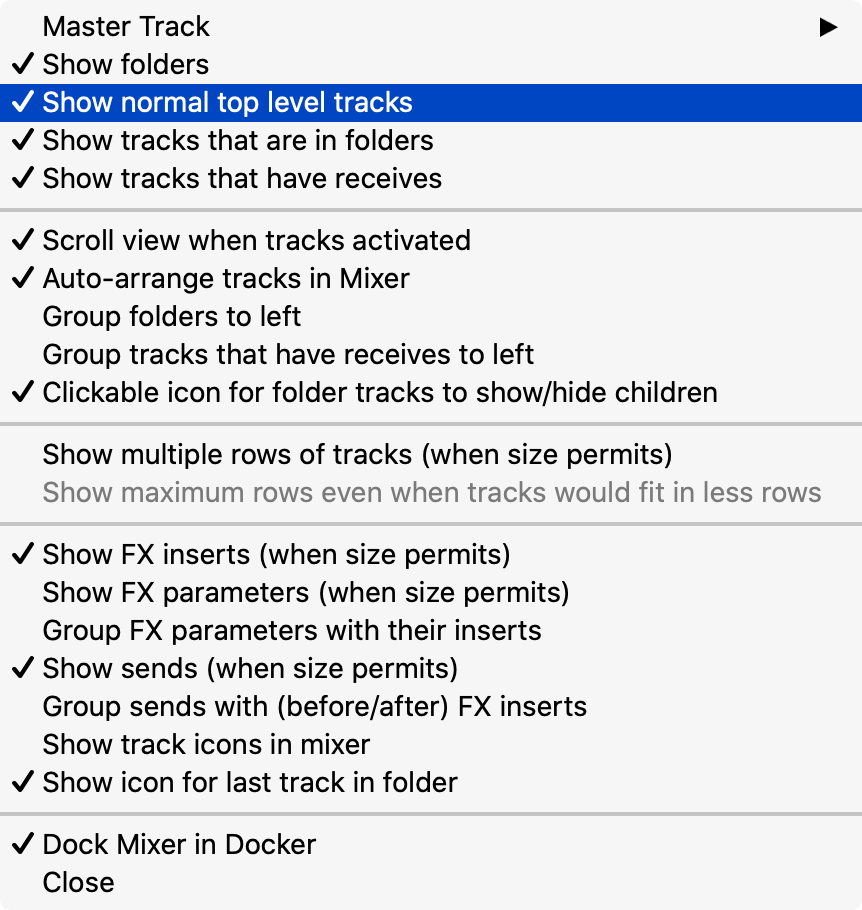 I like my groups to match their location in the main arrangement view so that I only need to keep a single mental map of where tracks are.

I do not like multiple rows in the mixer because it reduces the fader resolution. Using fine-tuning means that I need to remember to press an extra key constantly. Multiple rows also changes the rotated 1:1 map of track location in the arrangement to the mixer. 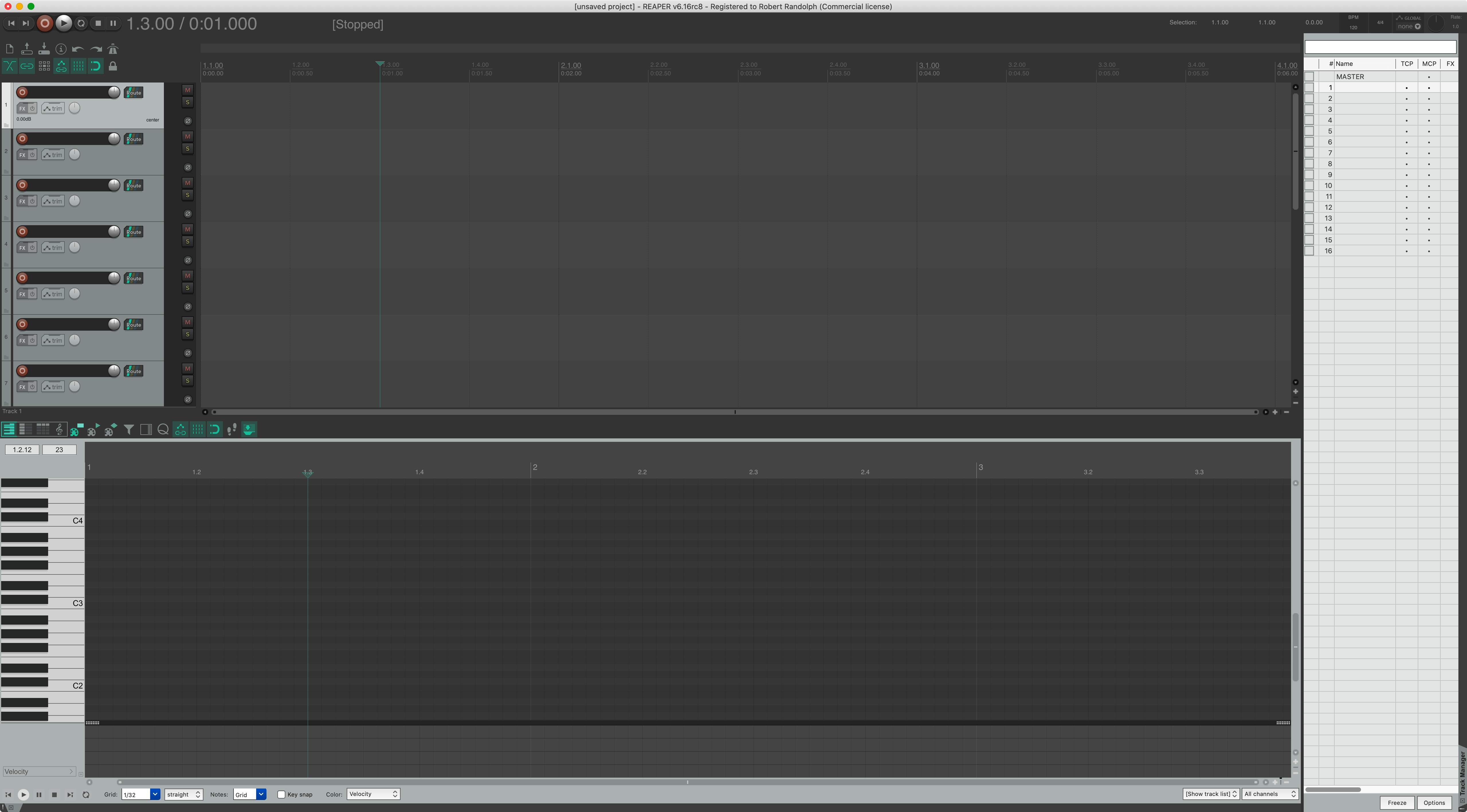 Setting up the MIDI Screenset is not fun because I like to switch to a screenset with an open MIDI editor, then select the MIDI items that I want to edit at will.

I do not like juggling between multiple windows. I want to maintain a single mental model of what is selected and have that reflected in a window that’s a single key away.

EDIT: It’s been pointed out to me by the fine fellow at REAPER blog that this is all available in Preferences->Editing Behavior->MIDI Editor. My oversight there!

EDIT: It’s also been pointed out in the comments that these can be accessed via the MIDI Editor window’s menu before you dock it. Alternatively these options are in the Actions List, however I did look there before I knew exactly what I was looking for. Now that I know what I need, it would have been easy to find in the Action List, but the menu hierarchy helped me in this case!

Now the screenset can be saved.

When I originally set this up, it took me days to figure this out. I wrote some notes, and apparently my notes weren’t great because it took me 2 hours to figure it out this time.

My window sets are:

It took a good while to think about and write up the DAW Wants feature, so this week I’ve only made it as far as setting up screensets!