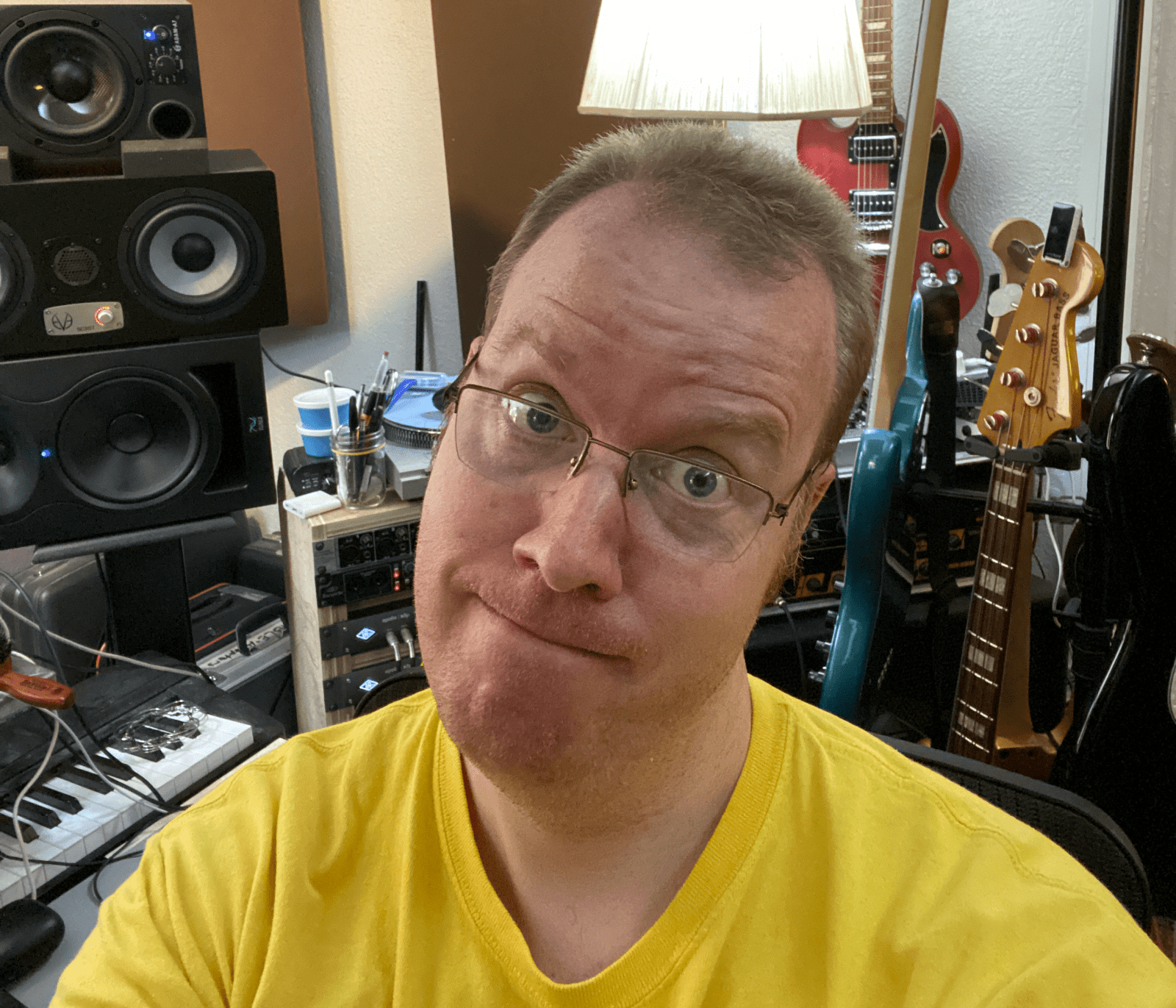 We had tree trimmers at the house for 3 days, and my wife is having a staycation, so I’ve been unable to finish filming the video version of the Making Drum Sticks article.

I’ve utilized that time to gather my thoughts about what I do with my time regarding this site. I’d like to my thought process with you.

Nothing good, nothing bad. Just the musings of a content creator.

This website was originally started based on someone seeing some of my massive forum posts that I used to write and they said to me, “You should really make a website to preserve some of this stuff.”

So here we are.

I decided that I’d maintain a website that was no more than me posting things that interested me. I wouldn’t write anything unless it’d be the sort of thing that I’d enthusiastically jabber about at a party, or write on a forum or put my wife to sleep to.

The site was originally named after a song by a 90s rock band named Mineral. My first post was 12 years ago detailing the setup choices I made in my modest personal studio at the time.

I wrote about 1 article a month, and in a period of unemployment I decided to rename the site to its current nomen. I transferred most of the objective articles (tutorials) and began posting every few days.

I kept writing only content that I found interesting. Little tricks I found. Small tutorials. Whatever was the outcome of my curiousity.

I started writing DAW reviews because I became fed up with Digital Performer at the time. I wanted a new product, and naturally I began to fiercely explore the market and document my path.

I enjoyed it! I’ve written, approximately, the word-count of Pride and Prejudice TEN TIMES just on the subject of DAWs.

I’m not even tired of it. I still find it absolutely fascinating when left to my own devices. I particularly find REAPER incredibly interesting due to the development cycling and scripting.

I have fantastic readers. I get more positive comments than negative, and I’m at the point where I get thanked for my content nearly every time I post on a popular forum. I post anonymously most of the time now to avoid that, but it’s nice to see. I feel appreciated.

Youtube on the other hand… not so much. I somehow average excellent ratings, but the response to my content is relatively poor.

I originally decided that I would make content only for myself, but I’ve been lured by the allure of community requests. I’ve produced a few tedious series that I had relatively little interest in other than wishing to provide interesting content to readers (rather than for myself).

I’ve recently caught myself dreading sitting down to write an article multiple times in the last 6 months. I worry that readers won’t appreciate the content, or it will be too niche, or it won’t fit the popular topic categories or that I’ll simply do a poor job.

I’ve almost entirely lost my drive to document my own curiosities.

My last video really sunk that nail into my skull. I spent 51 hours of ‘billable time’ for the lowest viewed content ever on the site. I enjoyed producing the content, but it was poorly received.

I could have written an article about why Logic is a steaming pile of partially digested pelican vomit and had a 10 page thread on vi-control for 1/3rd that effort!

Fuel to the fire was my nagging fear that I was ‘ripping off’ my patreons by providing content that did not interest them.

I am not pleased that I even considered these prospects.

My interests haven’t changed since I was young. I’ve always involved myself in the following things:

It’s such a strange combination of things that as the site has grown I’ve grown to fear that my eclectic, but consistent, interests would be off-putting to the casual reader. Throw in my constant fear that my capabilities are insufficient to produce any content that might come off as authoritative, and you have a perfect mix for growing insecurity and yeilding to the subtle pressure of a growing community.

The last two articles I recall enjoying myself, then felt poorly about the reception. I think that I retconned my own enjoyment out of existence based on the reception and spent the last ~month thinking that I just hated writing now.

When producing something that will be consumed, you have to be considerate of its impact on the reader as they read it, as they attempt to imitate or integrate it, and how your changing views will impact them.

It’s quite similar to creating a library in the software development world.

You can’t just sit down, spit out some experimental idea, push it as some revolution, and then expect people to follow up in a year when you decide to blow up the entire API because your idea was garbage.

It takes time. You need to sit back and experiment on your own dime. Research prior knowledge. Look at past failures. Put out concrete work based on concrete conceptual baseis.

I also used to pride myself on putting out content that was well-researched and planned, as well as keeping old content up to date.

I have had to accept that when producing videos, that is not possible. To combat that I created a system for a company that allows video content to be updated/refined, and as far as I’m concerned that’s there property. It works pretty awesome and there’s a lot of capability baked in that I’ve yet to explore. However, such technology isn’t feasible for this site.

Look at my DAW v DAW series. It’s already incorrect because of product updates! How depressing is that? I can’t be checking every month to update the descriptions (that nobody reads) for multiple videos because an external party may invalidate the content.

So what I’m left with is text-based content only, and that’s not particularly fun.

Text-based content isn’t even invalidation-proof. I’ve had a sizeable number of articles about DAW A or DAW B where I point out some flaws, ask for some feature or discuss some workflow and a responsive set of developers comes along and improves their product in response.

Great. Now that content is basically garbage for future readers other than an exercise in mildly effective complaining.

At some point I decided to produce weekly content. It was a way of ensuring that I’d stay busy.

My health situation has made this somewhat difficult, but more importantly it’s exhaused my intellectual capacity. I simply can’t force myself to find things to dive into with sufficient regularity.

It used to be that I’d spend time reading a book/manual/forum/menus/code and come across something that sent me down into the rabbit hole. It’s not a regular occurrence though. You simply can’t guarantee that every piece of data that you consume will be stimulating.

I believe that this is partially why I’ve come to rely on creating content to please readers rather than to please myself. It’s easier to try and impress someone else than to regularly impress yourself.

Criticism drives that last point into your brain hard too. When I end up in a slump, I know that I become more sensitive to a critical comment or two. Maybe I should be looking into that idea. Maybe I did miss something there. Perhaps I do need to please that niche group.

Then I end up making decisions that aren’t driven by my convictions and curiosity, but are instead driven by my desire to fill gaps in a path that nobody need tread.

There’s something about criticism where it often is the most impactful when it’s the least valuable, and I need to be more vigilant of that.

The result is leaving a legacy of content that I’m not proud of because of people that aren’t even happy with what I created.

So what’s a content creator gotta do to get by?

I’ve experienced times of doubt like this in my life and I just go find some obscure programming topic to obsess about until I forget about everything.

I already started to do that by writing 9 different site generators for this site, which I’ve enjoyed very much and learned quite a lot in the process. However that doesn’t make for particularly readable content.

Videos are basically limited to content that I’ve created and have control over.

Text limits my audience, but should I care?

Regularity is poison. There’s this pervasive idea that creators should be regular. No commits in 3 months? PROJECT MUST BE DEAD. No articles in 2 weeks? REMOVE DONATION. Major backend update? WHO CARES.

While editing this article over the course of a couple days I started to wonder which articles I particularly delighted in creating, and which I loathed.

I suspect you, dear reader, may be interested in that too.

I’m just writing this out to gather my thoughts somewhat. To summarize:

There’s some irony here that I won’t post this on my Patreon page so that I don’t bother my supporters with this twaddle.

If you’ve made it this far, thank you for reading. This is all part of the endless maturation process, and I appreciate you being along for the ride.