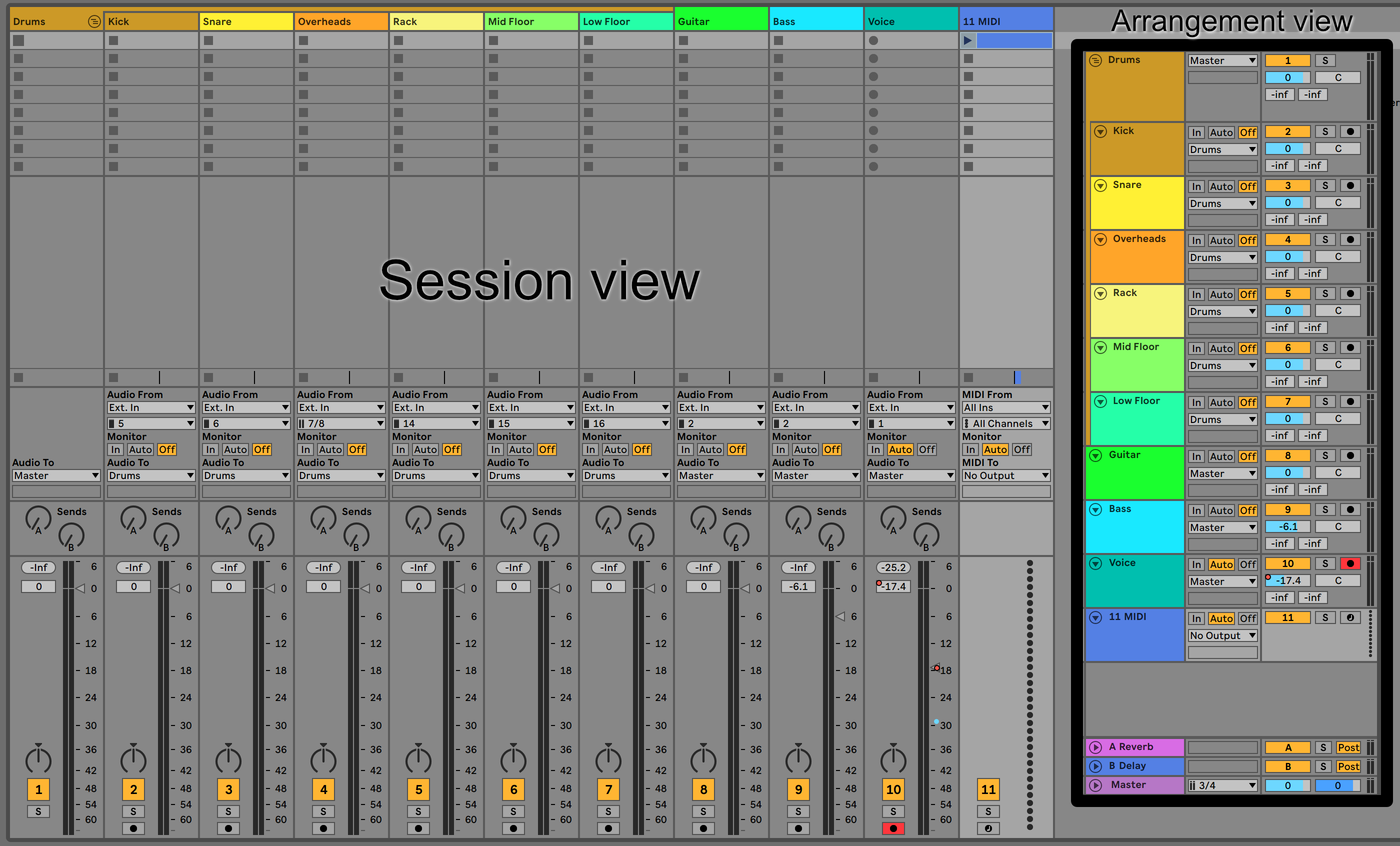 I’ve not been friendly to Live so far, and this post isn’t going to convince you otherwise. (hang on though… more coming still!).

This is the article where I discuss the mixing process in Live, which I’ve found to be the most painful of the 3 main processes in the modern music making process.

VALID FOR LIVE 10.1. Future updates may render some of this information invalid.

For this post I’m considering mixing as the process of taking recorded and edited data, playing it back and changing their sound in various ways as they go from many tracks to a single output format (stereo or surround?)

This includes plugin use and automation.

Live has two “Mixers”. The Arrangement and Session views both have mixing facilities at the end of where the signal flow is.

Each view has some things in common:

Generally the Session view is where most traditional style mixing will take place as it has the more traditional style mixer. The arrangement view panel is only particularly useful for small changes during the composition process, or I suppose you could mix in it by constantly holding the shift button for ‘fine adjustment’ of the small controls.

That’s really all there is for a ‘mixer’ in Live.

There are a few notable features: 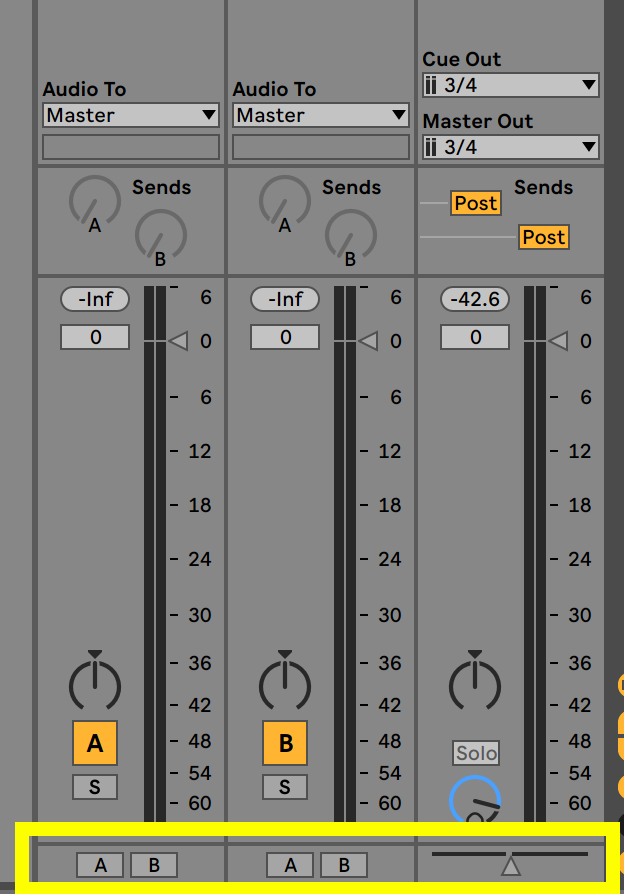 Live has a fairly unique feature: the crossfader.

There’s 2 assignments, A and B. A track can be either A or B, and changing the crossfader scales the assigned fader’s value accordingly.

The crossfader has 7 different types of faders (even though clip fades are more limited… wat), and it can be automated like most anything else.

Somewhat obviously useful for DJs, but since Live doesn’t have track selection recall it’s a bit difficult to work with 3+ tracks using the crossfader. Fading from track A to B is simple, but then to fade to track C you must have it assigned to the same crossfader bank as track A, but make sure to mute all of track A’s tracks. If there’s shared tracks then you’re in for a mad scramble. If you want to change track orders then your necessary alternating A B A B A crossfader assignments will need to be redone.

Having multiple crossfader banks and allowing the crossfader’s left/right positions to be assigned to a bank would make this significantly more useful for both live performance and studio work.

Each track can be delayed by positive or negative values in up to tenths of a millisecond. Awesome feature for syncing tracks. Great for remixes, DJing, adding “feel”, multi-mic recordings and more.

Here it comes… you knew it was coming. 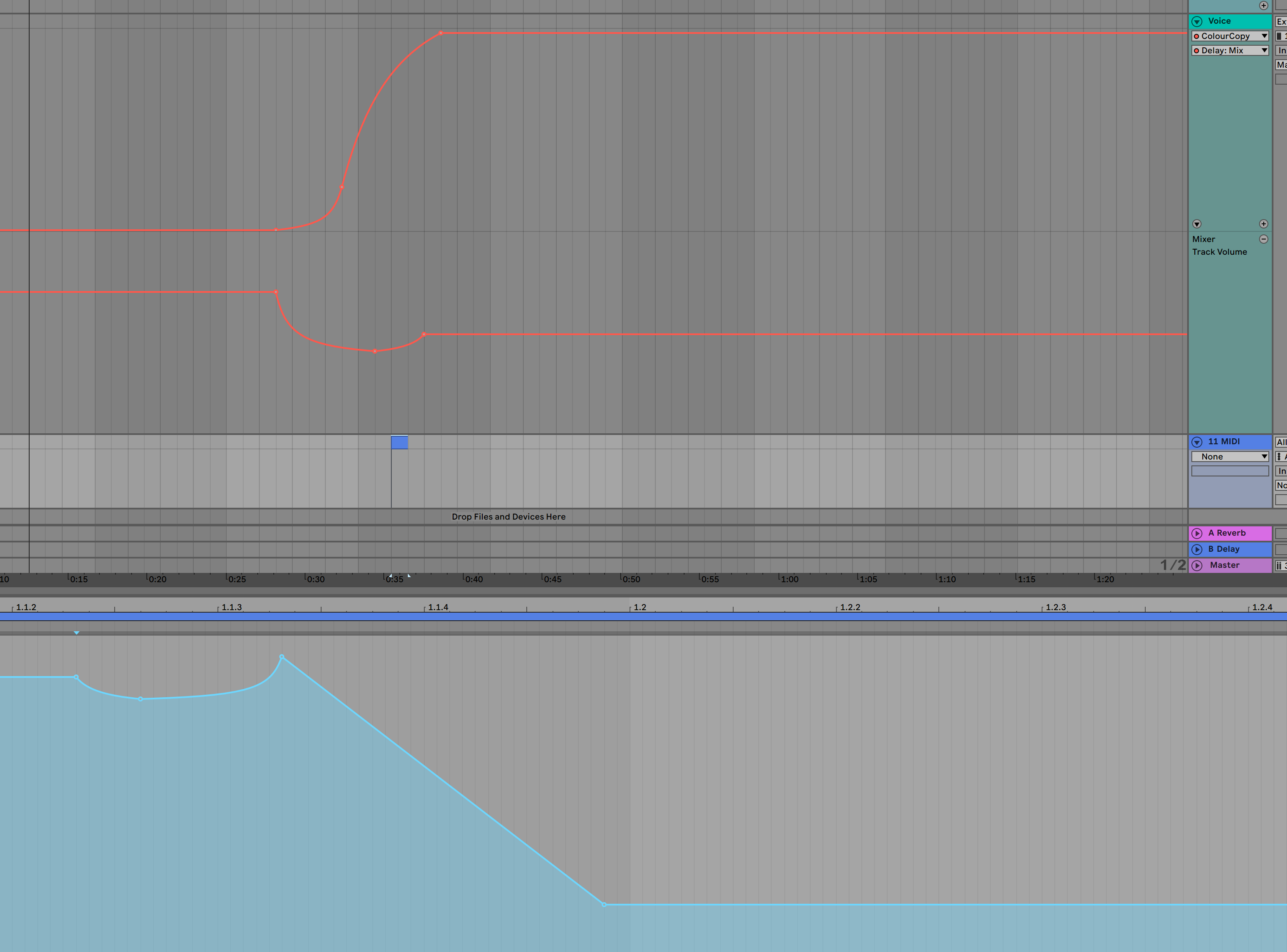 I’m going to try to narrow down the automation discussion to various sections, however there’s some general things that are missing:

Both clips and tracks have automation that gets combined. Clips have “Mod” envelopes that scale the automation by a percentage which is nearly trim, but not quite.

When audio clips are envelope linked, then the clip automation moves along with warp markers. This is a very useful and cool feature.

Live has your typical linear automation in the Arrangement view. Pressing the “a” key switches to automation view and you can select to view/edit mixer parameters, plugin parameters or only parameters that already have data.

There’s lanes for automation, or you can collapse all automation to display on the track itself.

Envelope points snap to the grid by default, which is excellent when utilizing Live’s Adaptive grid. Grid can be bypassed with Control/Command as needed.

Session view does not have any automation capabilities, so the expectation is that you work directly in the clip editor. (duh?) The clip editor has one specific cool feature: Unlinked Envelopes.

In the clip editor you can turn off the “Linked” button in the envelope section. An unlinked envelope allows you to create an envelope shorter or longer than the clip itself, which means the envelope is completely independent. The envelope can be a long series of points that spans multiple iterations of the clip, or a one-shot, or a small looped envelope that repeats independent of the clips play or loop state.

Super fun feature, but only applicable to Session view (which makes sense, this is surprisingly not a complaint).

Live 10.1 does introduce “Mod” mode in the clip editor envelope section that gives you a secondary envelope that scales the automation for that parameter by a percentage. This is generally called “trim” in other DAWs, but in Live 10.1 it is constrained to clips. However it only seems to be available per clip, and is toggleable only when viewing Session view. It can only be drawn in, and it only seems to work in Session view. It seems that when in Arrangement mode there is only “modulation” for a clip, but Session view allows “Automation” and “Modulation”.

Live 10.0 didn’t have mixer/fx envelopes per clip, so it would seem that the new ‘Mod’ mode allows you to trim an existing automation envelope during that clip when in Arrangement, and to use modulation as a trim over automation in the Session view. The manual doesn’t explain this at all currently, and it’s a strange design when trim capability in the Arrangement would solve a lot of problems that this doesn’t address.

I also find it somewhat disingenuous to call it “Mod” when it’s not what you’d normally consider “modulation” in a music context. There’s no signal generation here, it’s an envelope that changes an envelope. This is a feature that’s been called “trim” since mixer automation systems have existed.

Also see the previous section about clip envelopes about a few other bits.

Drawing in automation in Live is a fairly normal workflow. You enter automation mode in the Arrangement view or work with the clip editor in Session view. Double click to add points, double click to remove them. Alt/Option-drag on a line between points to create a curve.

For external plugins, points do not show the actual value when adjusting them. You see a breakpoint value between 0 and 100, even if the parameter is adjusting milliseconds between 0 and 20,000 or in dB or whatever. In order to know the value that you’re adjusting, you need to refer to the plugin window itself. You can’t manually enter values for a breakpoint either, which is generally worthless when you can’t see the real values that you’re editing for non-native devices.

Live’s native plugins do show correct metrics for breakpoints though, and other DAWs show them fine for AU/VST/VST3, so it’s certainly possible.

Draw mode writes data in steps the size of the grid, or smaller steps when holding control/command. Nearly totally useless except for the occasionally rhythmic effect (unless you rely on that, then I suppose it’s useful.)

The right click menu allows you to ‘insert shape’ with a variety of shapes, however the frequency, amplitude and phase require secondary and tertiary editing steps. It’s not possible to easily scale existing automation by a shape either. Many other DAWs allow you to insert a shape and set its frequency/amplitude/phase all in one swift move while deciding to add, subtract, multiply or divide the new data against existing information.

See the editing section as well. The ‘select and box’ method works for creating automation as well as morphing it. Great workflow.

Recording new automation in Live is…

I don’t have words.

With “Automation Arm” turned on: You hit record and everything is armed. It’s combined with audio/midi recording as well, so if you wish to record something then add some automation you will need to be careful to manage your track record arm states or you will overwrite existing information.

With “Automation Arm” turned off: Any parameters that you adjust during recording will subsequently disable the automation envelope for that track. You will need to re-enable it yourself. External plugins seem to require re-enabling globally, so any intentionally disabled envelopes will need to be redone!

Recording automation when in the Session view records it to the Arrangement view, except when it’s not. The setup for this is unnecessarily confusing where simply having an automation arm button/mode for a clip, or track could suffice. When using the arrangement view it does not seem to be possible to record to clip envelopes.

I’ve always found this to be ridiculous given that Ableton likes to push the hardware capabilities of Live. Launching clips is fine, but automation… at least 3 decades behind the competition.

There’s one notable editing feature as shown in the video above. You can select a range then scale the start/end, whole selection and compress/expand it. 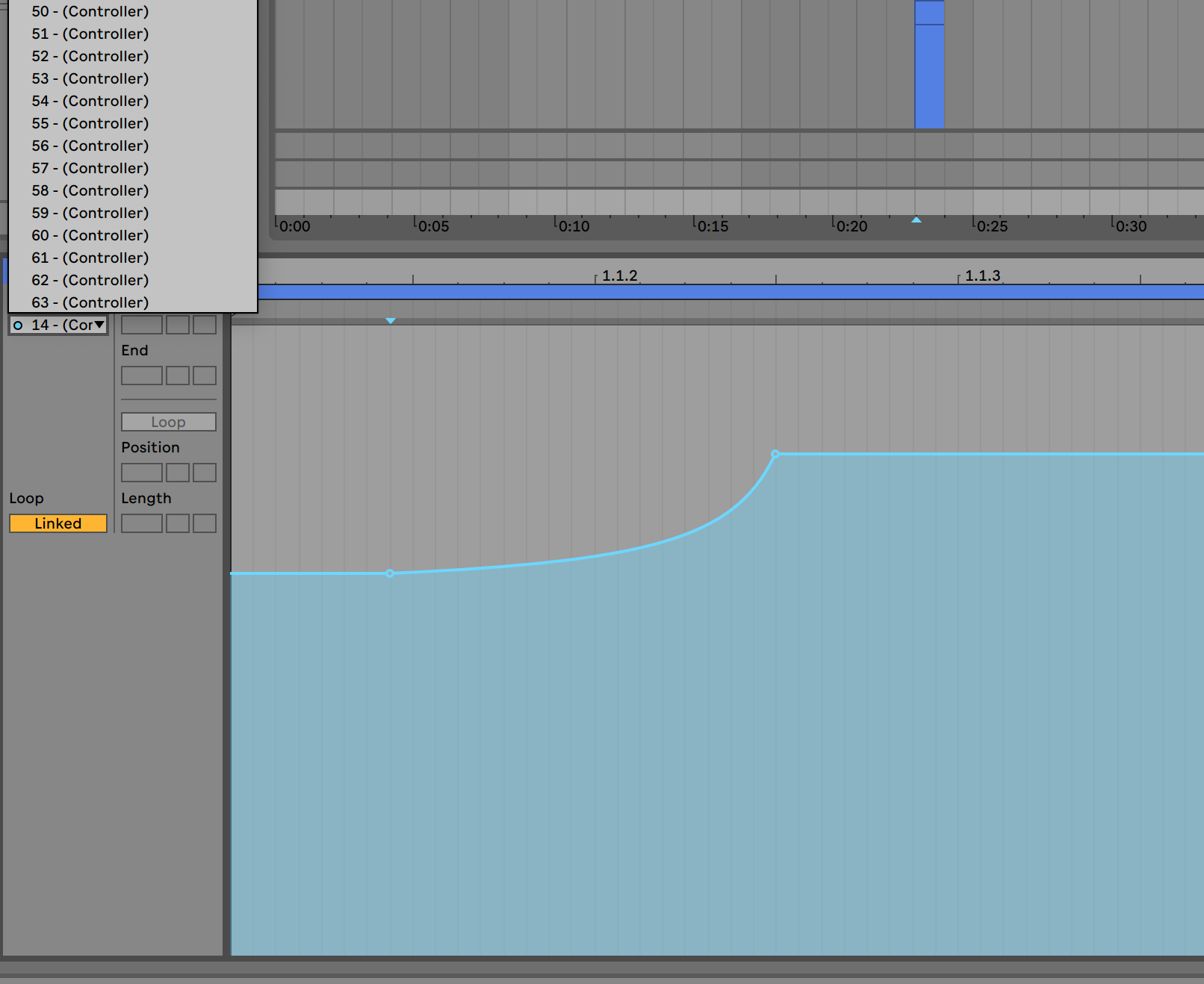 MIDI clips have CC automation, but no ability to attach track parameters to them like audio clips. This can be a limitation! There is no design reason for this, as MIDI clips exist on tracks the same as Audio clips and could conceptually have “mod” (trim) envelopes just like audio clips.

CC is edited via breakpoints, which is a feature that I know many people prefer, but I personally dislike it. It obfuscates the underlying data (CC is singular messages sent one at a time). Some hardware, and even some software, can only handle a maximum density of CC data and Live does not allow you to adjust this. On the opposite spectrum are some devices that have no interpolation on modulated parameters and do best with dense CC data. Timing of CC messages is also difficult to determine.

There is no Sysex, and no NRPN. (Live does label the NRPN CCs, but this does not mean that it supports drawing it)

There are no tools for directly entering CC values, so you must drag with the mouse and watch a label.

Only one envelope at a time can be visible. Aligning items (especially when not on the grid) can be problematic, and there’s no guarantees about the order the CC is sent (which can be important for some devices!). 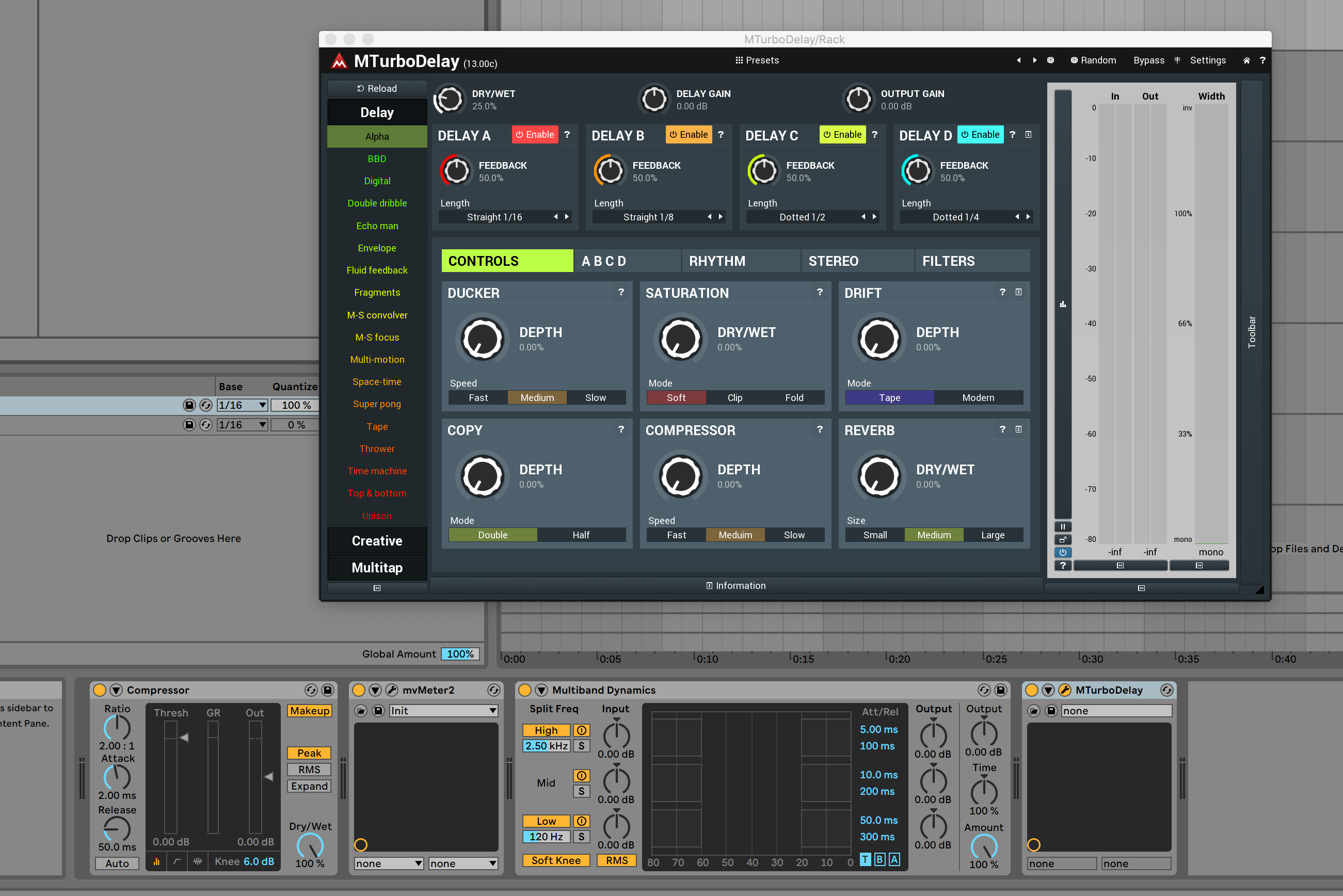 This harkens back to my barking about the browser, but with more.

And now the cool stuff:

I rather mix a track with a spoon than use Live. Every DAW has some major weakness, and this is Live’s.

The mixer is exceptionally basic and scattered across the screen.

Automation is even more basic and feature-barren, which unlike some other feature exclusions in Live; it does not aide in the simplicity of using the software.

Device management is difficult: devices are frustrating to add, easily overflow the screen (with poor management of the overflow), and presets are handled differently for varying device types.

I can not think of a single peer/competitor/similar-class-product to Live that doesn’t handle nearly the entire process better. When using Live it feels like it was designed for small and simple projects. The mixing process cements this idea even further by lacking any sort of features for efficiently navigating a large project, managing automation data, handling solo/mute beyond the absolute basics, managing devices, etc…

I know there’s people mixing in Live and mixing large projects. Unfortunately, I think these people are either sadists or woefully unaware of how much extra work they’re doing for no benefit.

Though… since Live doesn’t easily let you render stems/tracks, larger projects become increasingly more difficult to export so you can sanely mix in another software (rewire: not sane). It’s rather devious. Brilliant even. Intentional… probably not.

This post took 18 hours to research, screenshot, write and edit. If you appreciate the information presented then please consider joining patreon or paying me for my time spent bringing you quality content!