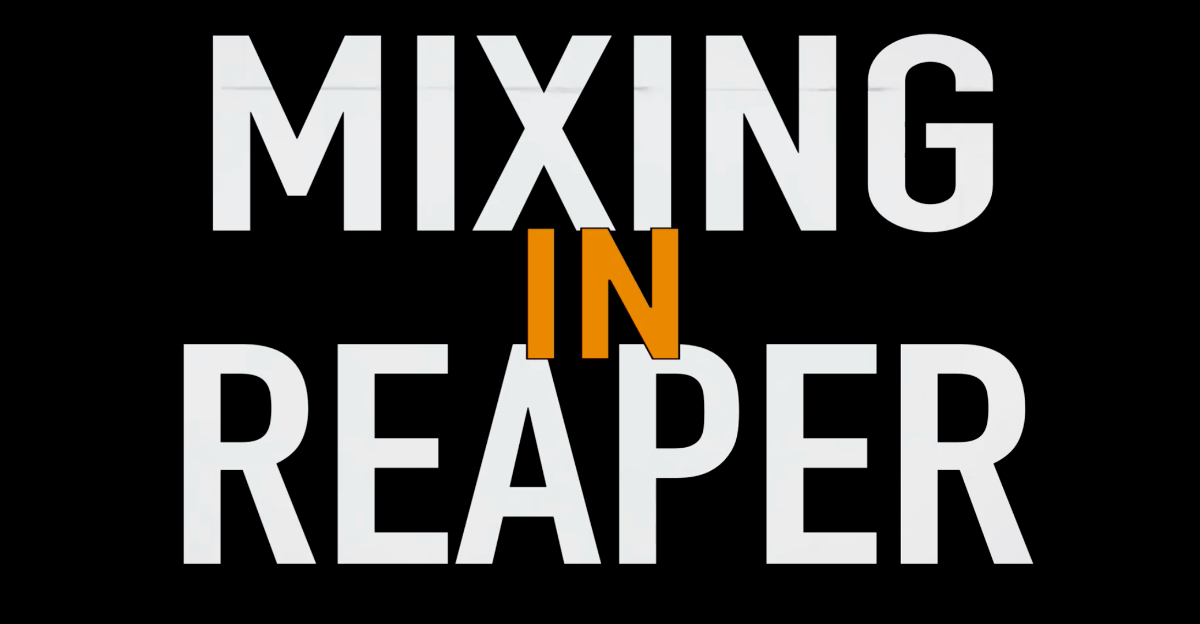 Today I’m doing a review of something somewhat unusual: an online course.

Specifically I’m reviewing the Mixing in Reaper. Volume 1, 2 and 3 are discussed.

There’s not going to be any images or video here. It’s just a text review of a product that I think is…

This isn’t just a few videos you get then watch back in VLC. The website backend is pretty neat. It shows your courses and _keeps track of your progress. When you complete a video you can mark it as complete. That way you don’t forget where you are in the series if you need to take a long break.

The videos themselves are unlisted files on youtube. Youtube does a decent job of remembering your place so you can revisit a file later. You also get the benefits of youtube like creating your own playlists, watch later and watching on other devices.

I watched the series on my smart TV using the Youtube app and the watch later feature. I was able to write this review (partially) on the comfort of my couch, then transfer to my computer, then watch on my iPad, then switch to another tv, then…

It’s convenient and it’s a great setup for a course.

The website has a place that shows your completed courses and awards you certificates and achievements. Cute, but eh… not necessary. I’m sure it’s just part of the wordpress plugin he’s using ;)

MiR2 and MiR3 include stems and bonus text-based information along with the videos.

Mixing in Reaper is a course that does what it says on the tin; you are lead through the process of mixing a track in Reaper. It’s a somewhat generic rock track.

I don’t want to spoil the series for you, but here’s what you can expect to learn in the series:

I’m not a big watcher of mixing videos, since I rather just be mixing and being paid for it. I have watched a number of them though, and they all tend to be overproduced and unrelatable to even me as a professional.

I suspect that anyone mixing music, even if you’re not working on a metal track like he is, can relate to what’s happening on the screen.

The multitracks he’s sent aren’t perfect. It’s not like these other mixing courses where you could just turn up everything and it already sounds better than 95% of what you work with.

You’re not going to roll your eyes and think, “Sure, but what about MY tracks?” That’s great.

One of the biggest mistakes I think people is that they don’t take breaks. Jon takes breaks. Be like Jon guys. It’s a lesson. Learn it!

The bonus content, where Jon mixes the track with only included Reaper plugins, is fantastic. Many folks seem to think that Reaper doesn’t come with much built-in, but it does. Jon demonstrates that nicely.

There’s an overhead picture-in-picture that shows you how he interacts with his controllers. It’s not some massive expensive setup. It’s relatable. His phone is sitting there, stuff is crooked and I’m pretty sure that’s a cheap ikea table. Who cares? It’s getting it done.

Some mixing techniques that I consider to be fairly basic like using sends, parallel compression, multiband compression and sample replacement are present and Jon uses them well.

More importantly he takes time to show you what he does. A good number of mixing tutorials I’ve seen are just the dude saying, “Ok, I loaded up this and then I loaded up this…” With MiR you get to see the full process. I also like that sometimes he’ll outright say, “This sounds good and I’m not really sure why.” We all have those moments, so why hide it?

I wish Jon explained more of why he’s doing things. There’s relatively little talking in the videos as he simply mixes things. He does make that clear in some of the introduction, but I’m not sure that it’s clear enough in the promotional materials (it is mentioned though).

If you’re curious why he loads certain plugins or how he’s using them, then you’ll get a bit lost. The ‘getting lost’ thing is exacerbated a bit by the fact that he’s working at full speed. Working at full speed is a blessing and a curse. On one hand you get to experience the flow that you should be working towards, but on the other hand if you’re a total beginner there will be some pausing and rewinding.

I did watch the entire thing. Every single second. I know understand most everything that’s happening and I still had to rewind sometimes.

There’s some things he does with editing that I don’t even understand, and I’m pretty OK with Reaper. I wish he’d slow down and show some of that, but it IS a mixing video, not an editing video.

The videos start to have glitching due to the simultaneous video recording and mixing. It’s not too bad, but it is there.

There’s not much Reaper specific information, but you can view that as a good or bad thing.

With MiR2, we’re rolling along in Reaper 5.15, and working on a post rock song by Jon himself with some collaborators.

So here’s what you’ll get/learn this time:

I love post rock. It’s what I listen to mostly, and I’m heavily biased towards the track Jon is working on in this one.

There’s some more experimental mixing in this, along with Jon trying out techniques that he doesn’t normally do. You get to watch him work through new ideas he has and see it develop in to something decent sounding.

Lots of A/B of before and after effects, along with comparing parts to other parts. This is a vital part of mixing that is great to seem demonstrated. It’s not the somewhat dishonest ‘Here’s before and HERE’S AFTER’ type things you see that seem to only serve the purpose of showing off. These are honest before and afters, sometimes he realized he doesn’t even like the after and scraps it.

Jon spends more time walking you through some Reaper specific things in MiR2 than in MiR1. This includes things like cycle actions

The third party plugins used are listed in the course, which is a nice touch.

MiR2 is more interactive. Jon asks more questions of the listener and encourages some involvement. MiR1 is missing that, and it’s a great improvement over MiR1.

I do appreciate that there is more time spend with third-party tools in this course.

This is a bit of a softball project. The mix basically does itself. That doesn’t mean that you’re going to be short on content, but if you want to see someone work through a challenging project, then maybe this isn’t for you.

Given how relatively simple this track is, there is quite a bit of bikeshedding. Things are tweaked and tweaked and tweaked. Do they generally sound better? Yep. Is it worth the time? That’s up for you to decide. I think some people may enjoy it, and others may just end up fast forwarding. I don’t think it’s a bad thing per se, but some folks will love it and some will hate it.

I think this could have been an hour shorter. I feel like he had a great mix in the first video and a half, then tweaked a lot more than was totally necessary.

However, Jon does spend this ‘extra’ time doing things that you can learn from. Perhaps a more complex project would have alleviated this issue a bit, or a project that he is not so intimately familiar with.

MiR3 is recorded starting in Reaper 5.93. This is a pop-punk track.

In this series you’ll learn:

Vocals! The hardest thing to mix. There’s actually vocals in this one, and he doesn’t screw it up. There’s some excellent tips in here for working with vocals.

The automation section is great. Jon has a neat automation workflow using Latch Preview in Reaper. I personally do something very similar (and I use Latch Preview a lot), but I’m thinking of trying his method.

Once again Jon uses a clipper during mastering, which I appreciate. It’s an important part of mastering that few amateurs take advantage of.

Working through using Virtal Drum software to turn MIDI in to a convincing drum part is pretty cool to see. Some other mixing tutorials I’ve seen just start with sampled drums and try to pass them off as real. You can see what’s happening here fully.

There is an extra emphasis on working with guitars it seems, which presents some great tips on making electric guitars to fit in a dense mix. It’s a delicate task, and Jon takes the time to give you plenty of before and after to hear the subtle differences.

The topics are split in to smaller more digestible videos and more targeted in their focus.

The mastering portion of this series is more in depth, with more explanations of why he’s doing things.

There’s a good bit of the videos focused on Slate Drums, Amplitube, Line6 Helix and more…

BUT, the free plugins from Le Pou, TSE, Audio Damage and more are there too, so you can still follow along. However, the free options don’t seem to win out often.

He mixes the toms too loud. :)

All 3 volumes are quite good. There’s clearly a production improvement from volume one to volume three, but that doesn’t take away from the information presented.

Sadly, I think “Mixing in Reaper” is a bit of a misnomer. There’s very little Reaper specific content (outside one section in MiR3). The majority of the videos are just pure mixing technique. Any DAW user could watch these videos and pick up some tricks for workflow, effect use and organization.

While I think I criticized MiR2 the most, it was the series that I enjoyed the most. MiR3 has the best production and better before/after’s. MiR1 is the most generalized.

I did not purchase these videos, but even as a professional I learned some interesting ideas and there was no point during the videos which I cringed and wanted to throw my water at the screen. There’s A LOT of courses out there that are nothing more than a famous person that gets some amazing stems, turns them up and talks about the presets they used. I watched a well known course recently that was almost nothing but a famous artist talking about how various things ‘suck’ and offering almost no information.

It’s not all roses though. While his mixing technique is solid in all 3 videos, the production visibly improves over time. That doesn’t diminish the quality of information, but it may affect how well you take in the information.

I can say that there was at least 2 techniques that I learned that I’ve already applied in a project I’m working on. There’s a few plugins that I’m interested in based on the results I saw. Given that I’m fairly sure I have more experience in the music industry than Jon, I think that’s a great indicator of the value anyone can get from the series.

Go Check it out for yourself at Reaperblog.net.

This post took 16 hours to watch, write and test. If you appreciate the information presented then please consider joining patreon or donating!