In this third-to-last post of the mixbus review, I’m covering the MIDI editing capabilities.

I will say that I am not primarily a MIDI-based musician. I do work with MIDI and softsynths in my freetime, however my knowledge of the needs of a professional composer are not personally acquired.

NOTE THAT THIS REVIEW IS FOR VERSION 4.2

One of the primary things a lot of people miss out when trying Mixbus is that it does have the capability of working with MIDI.

Mixbus’s MIDI editing is inline, meaning that the MIDI editor is shown only in the editor view along the track. There is no “MIDI Editor” to pop out and no overlaying of tracks.

Mixbus contains MIDI data inside regions, just like audio data. Regions can be overlapped and play simultaneously, which makes layering parts a breeze. Region-based midi containers also make it much easier to change arrangements by containing certain data to a region then moving those regions around to experiment. Most of the region based editing features for audio are applicable to MIDI.

There is also the ‘stacked’ mode, which will be covered in the audio editing section. In the image above the stacked mode is shown, where regions are processed top down. Regions on the top are played and anything below them for that time is not.

Mixbus’s MIDI editing is tool based for editing note data. When working in a region you are primarily either using “Draw mode” or “Internal Edit Mode”.

Notes are input with the Draw tool, where you’re given a nice overlay of the current note name (with sharps…), MIDI note number, velocity and channel. This information disappears as you click and drag to input a note of a given length.

The default note length is the grid value, and the note value can be changed by dragging the note length after clicking.

Note velocity is not set with the common bar-graph or line-graph under the piano roll, like you see in other DAWs. Instead in Mixbus you select the note(s) and use the mousewheel to adjust the velocity. A nice text overlay shows the velocity of the note that your mouse is currently hovering over.

CC and similar data is represented as automation similar to any mixer parameter or plugin parameter.

There is an interesting ‘Transform’ dialog for logical/mathematical adjustment of various MIDI values based on other notes attributes, randomization or a specific value. Surprisingly useful when programming things like drum parts.

Note channel or setting specific time, velocity or pitch is done via an edit dialog that is accessed by a context menu or done through the list editor. 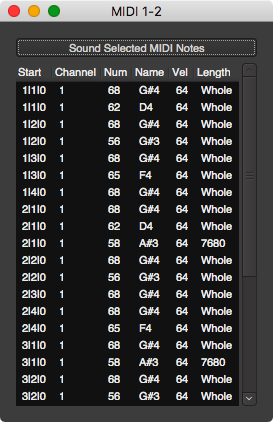 There is a ‘List Editor’ that can be called up on a MIDI region. This gives you a quick overview of the data in the region, and allows you to quickly edit the data.

Data can be edited via mousewheel or entered manually.

Mixbus does have a simple drum editor, accessed from right clicking the track, selecting “Note Mode” then “Percussive”.

This is a midi editing mode with no note length visible. Entering a note by dragging repeats the note rather than extending the length.

Under the hood, the note length (distance between note-on and note-off) is set to the current grid size.

Once again, note attributes are set via dialogs accessed by context menus. 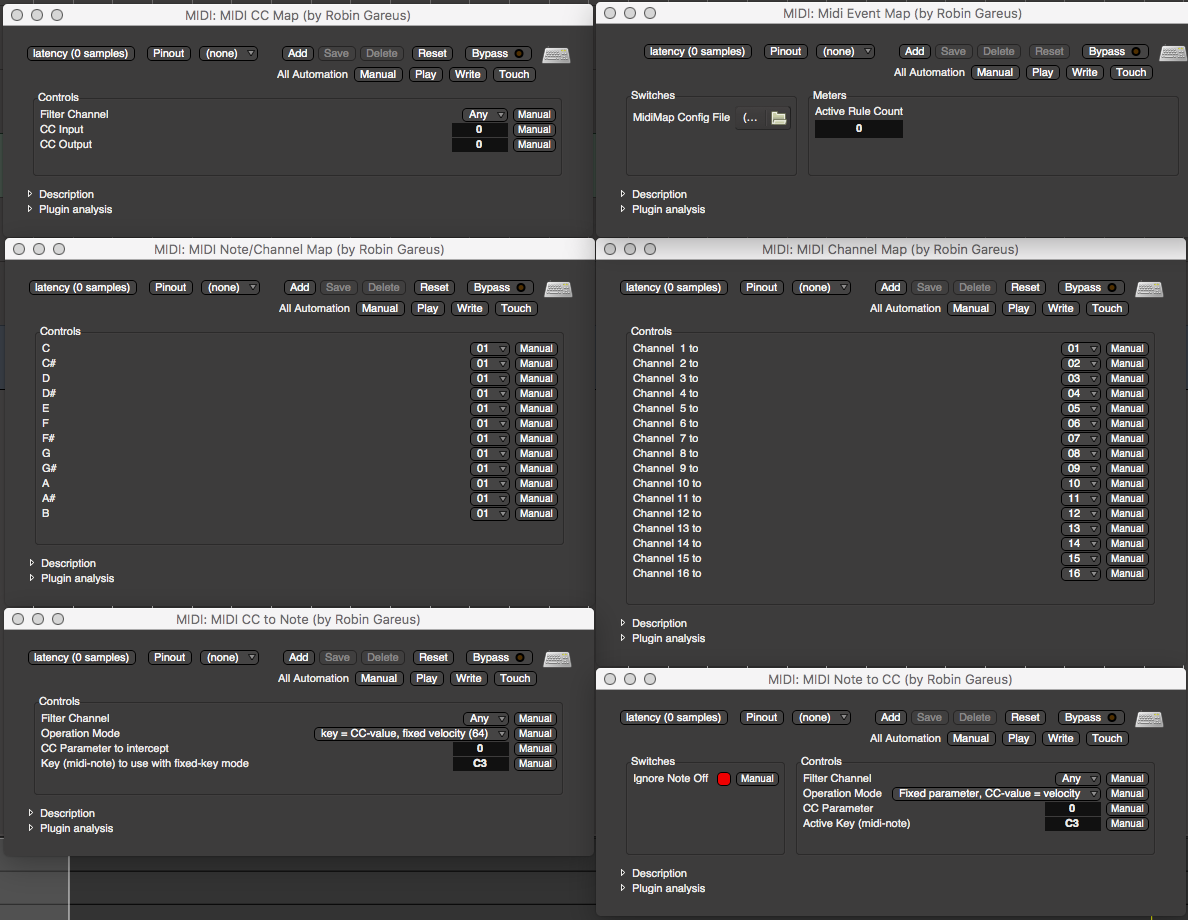 I covered the MIDI processors included in Mixbus already.

Unlike many other DAWs, Mixbus primarily controls midi streams through the use of these plugins in realtime rather than manipulating data directly in the piano roll.

There are also destructive functions like ‘legatize’ which makes every note lightly overlap the next or the simple quantize dialog which aligns note-ons and note-offs to specific time values.

Mixbus now has a patch selector. It lets you quickly browse through presets or patches.

Most synthesizers don’t publish their information for this, but you can create your own patch map as described here.

Patch maps also show when you use the “Insert Patch Change”, which can make it easier to navigate patch changes in a complex project.

Setting up instruments with multiple outputs is fairly simple during track creation. Mixbus detects multiout instruments and gives you the option to allow mixbus to setup a one-to-many routing setup with busses for each output.

Mixbus does have basic midi editing, which is likely sufficient for most artists that enjoy playing their parts in with an external instrument.

Currently there’s a number of features missing that I think your average ‘computer musician’ uses frequently. Most of these are listed in the criticisms section.

I think that if you are primarily a MIDI musician, it’s worth trying Mixbus to see if it offers you what you need so that you can continue your work and take advantage of many of Mixbus’s other unique features.

If you are currently using another DAW at a moderate or high level of competency then there’s a fairly good chance you will find a lot of missing features and workflow shortcuts that you may already be used to.

Hopefully the Ardour and Mixbus team will be addressing this area of the software in the near future.

NOTE THAT THIS REVIEW IS FOR VERSION 4.2

This post took 6 hours to research, photograph, write and edit. If you appreciate the information presented then please consider joining patreon or donating!