Reaper's Amazing, and Awful, Almost Anything to Anywhere Avenues (routing)

Modulate all of the things!

Reaper has quite a routing system. It can allow for some exceptionally cool routing configurations that will leave you scratching your head the next day.

In this post I’ll be going over some of the things you can do with Reaper’s routing, and I will also discuss why it will immolate your soul and leave nothing but the charred remains to remind you of your sins.

Background: Why this all works

Audio and Midi on the same track, in the same place

Tracks can contain basically any data. You can mix data and overlap data. Look at the image above. Yep, that’s audio and midi on the same track, and they place at the same time, and they can be freely routed.

Every track is basically a 64 channel DAW. 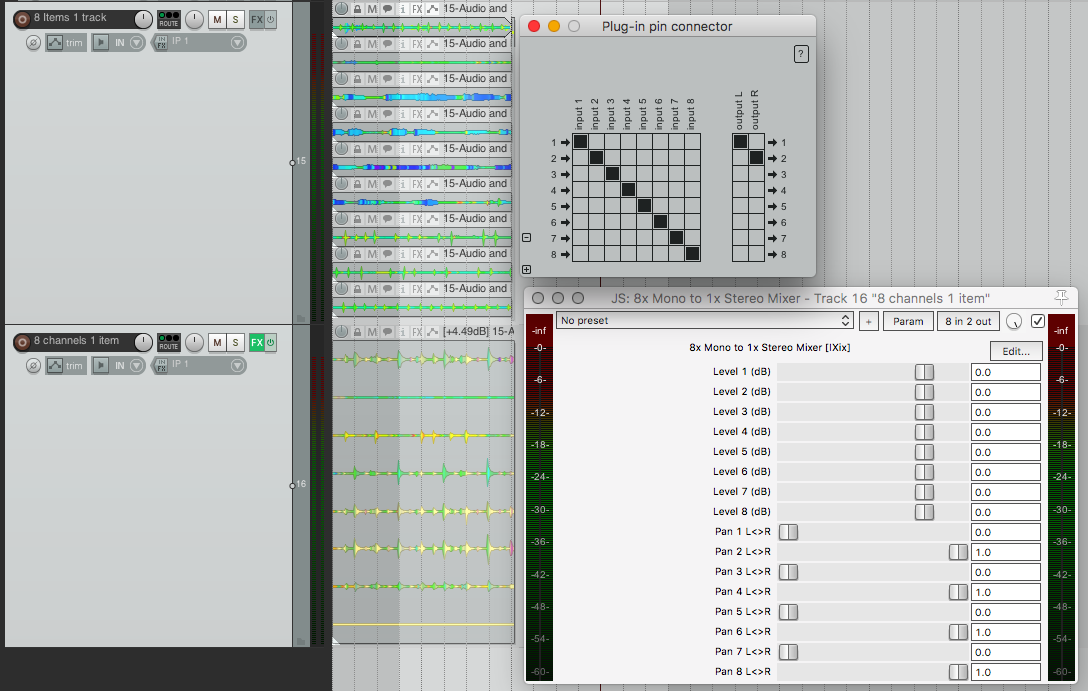 Any given track in Reaper has 64 channels of I/O with the option to have freely placeable overlapping media items. This allows each single track in Reaper to act as a 64-channel DAW in its own right. 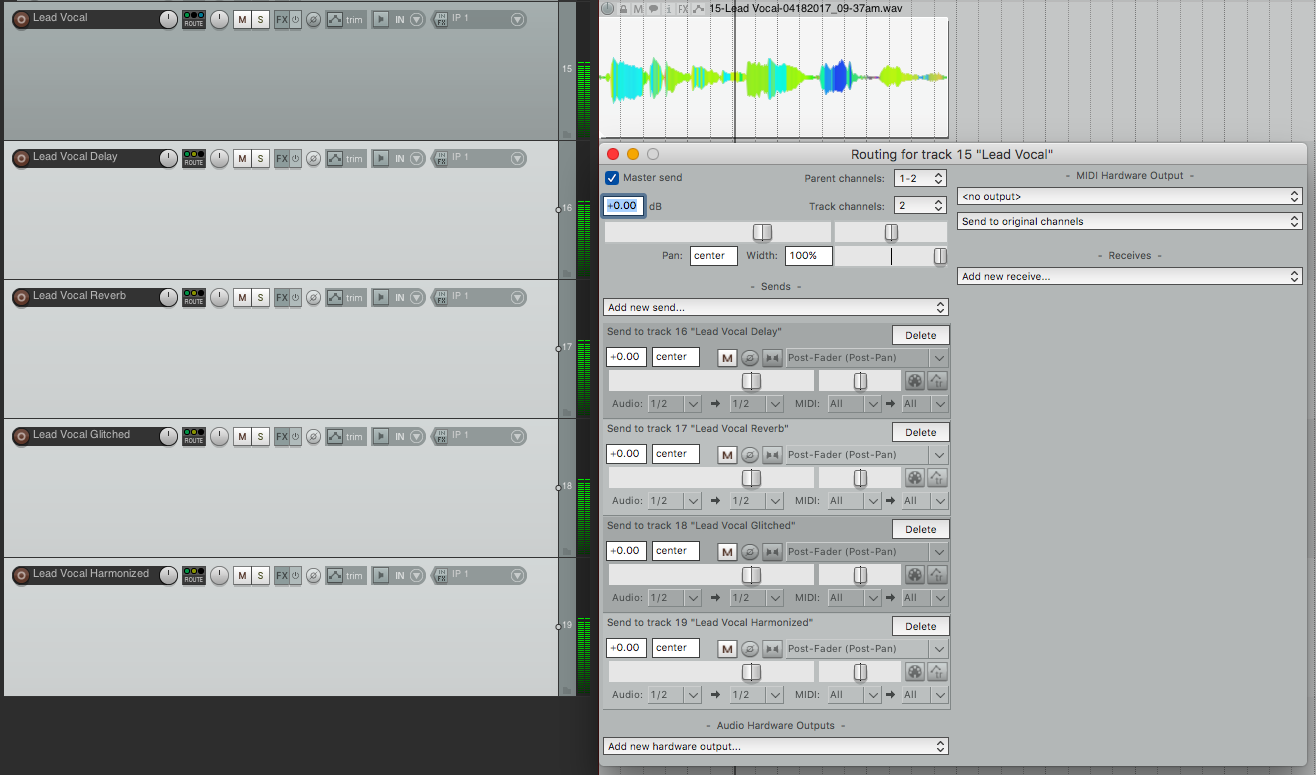 This is pretty simple. Most any DAW can do something like this. The difference with Reaper is that there’s no distinction between a normal track and “Aux/FX/Send Track” like in other software.

Where's that noise coming from

A very useful thing to note here is that in Reaper you can not only see sends, but receives as well. If you can’t recall where an empty track is taking data from, then you can click the routing window and see the receive.

One VI to separate tracks 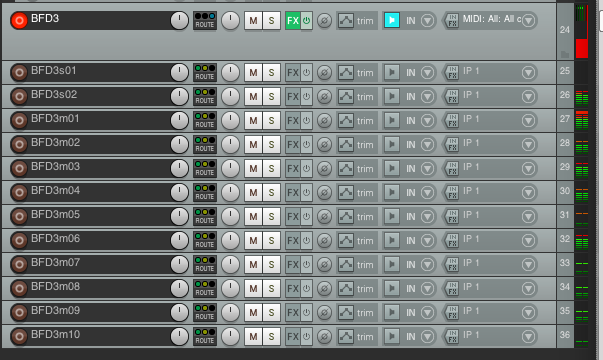 BFD out to multiple tracks

As you would expect from a modern DAW, Reaper can easily handle instruments that have multiple outputs. In the image above FxPansion BFD3 is outputting to multiple tracks. Nothing special, other than all the things that you can do with it. 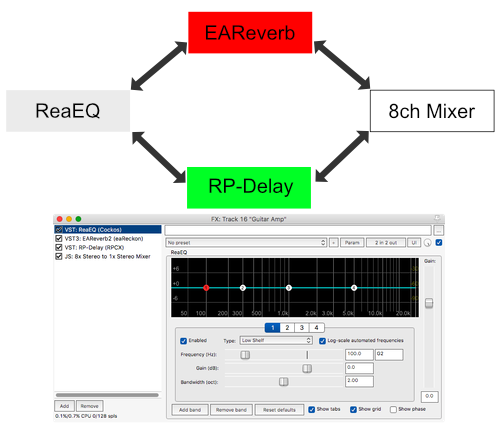 A single FX can route itself to many destinations, which of course includes other FX in the chain.

In the image above I have setup a parallel routing scheme. The ReaEQ does nothing except split the signal (any plug-in can do this, and it’s not strictly necessary here, but it does make things easier when you want to get more complex.). At the end of the chain I have a mixer that combines the paths to output a single stereo signal.

You can do a wide variety of routing setups with FX, including sending specific FX to another track (or vice versa!).

Shoutout to EAReckon’s EAReverb 2. IMO one of the best algorithmic reverb plug-ins. 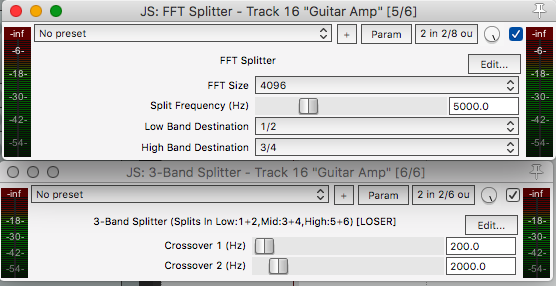 One to many... other things

Since the “One to Many” paradigm works for FX, you can also have FX that output after processing. Reaper comes with various things that let you split your signal up and send data out to be processed.

Section B: Many to one

Many to one is basically what most people think of as a “Send” or as a “Buss”. Multiple tracks route audio to a single track.

Reaper has multiple ways to achieve the “many to one” routing scenario. 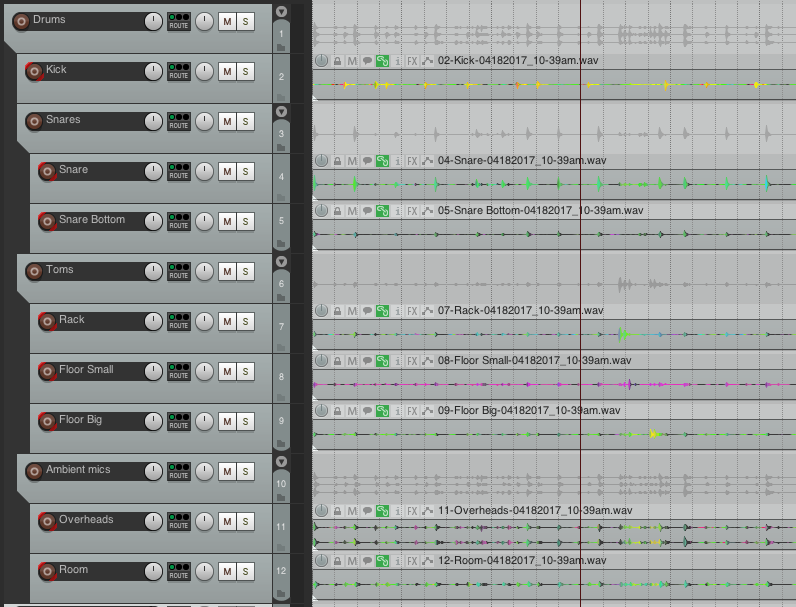 Most DAWs consider folders to be semantic grouping. Reaper uses them for routing of audio and visualization. A track can have a hierarchal setup of tracks “below” it that all feed upwards to the parent in the hierarchy.

Consider the image above. All the drum tracks are routed in to a hierarchy of folders. The following list shows the busses, that is to say the tracks that have no media items, but just have their children’s audio routed to them:

In the image there is a waveform drawn for the buss tracks that shows the combined signal routed to them, but this is not an actionable piece of data. However, top-level tracks can contain media, just like any track.

What differentiates a send from a buss

A track in Reaper can send audio to any other track, and simultaneously output audio from itself. This is just like a normal send in any other DAW, except the destination is just another track. No requirement for the destination to be an “Aux/FX/Send Track” like in other DAWs.

All you have to do is create a send and leave the pictured item checked. Sometimes it’s called “parent send” depending on the folder hierarchy. This is what allows the track to operate normally and also send out data to other tracks.

What differentiates a buss from a send

When you turn off the Master/Parent send, the track will only output data to its sends. This setup allows you to coalesce audio to a single place without using folder tracks.

Same as setting up a buss track in any other DAW, rather than using Reaper’s folder system.

Episode 3: Many to Many

Let’s start this off with a Kenny video.

Here you can see that it’s possible to record multiple channels of data (audio) to a single media item, then split those multiple channels out to their own tracks. This can make something like managing a large multi-channel, but single performance, item very simple. Multitrack drums are particularly useful to be worked in this manner.

Of course, all the other routing features are available here too.

Chapter IV: One to One

We already know that “One to One” routing exists, since it’s simply an extension of “One to Many”, but it may not be obvious how useful this can be.

Modulate all of the things!

Another subcategory of “One to One” is that Reaper has parameter modulation for any given FX parameter.

In the image above I have 2 things happening:

There’s also a feature not shown: you can link any parameters to midi CC or to another FX parameter on the same track (even across plug-ins).

The 2 Kenny videos above explain some basic, but excellent uses for it simple one-to-one routing.

What's happening in this gif?

Imagine this: You have a brilliant music making/mixing/producing session and you wake up ready to keep working. One of the great things about Reaper is…

One of the most annoying things about Reaper is how difficult it can be to figure out how stuff is routed. Don’t believe me? Check out the gif above of me trying to show a the fx routing from earlier. I’m sure you have it figured out after a few views right? This is a very simple setup. It’s that parallel routing right? No.

I actually changed it slightly, and the EAReverb plug-in is being routed to another track! I’m sure you can understand how confusing that can become eventually, especially if you go nuts with routing. (like I tend to)

Reaper’s routing gives you enough rope to shoot yourself in the foot. When you’re in the groove some very fun and useful things are possible, but when you wake up the next morning… well… good luck.