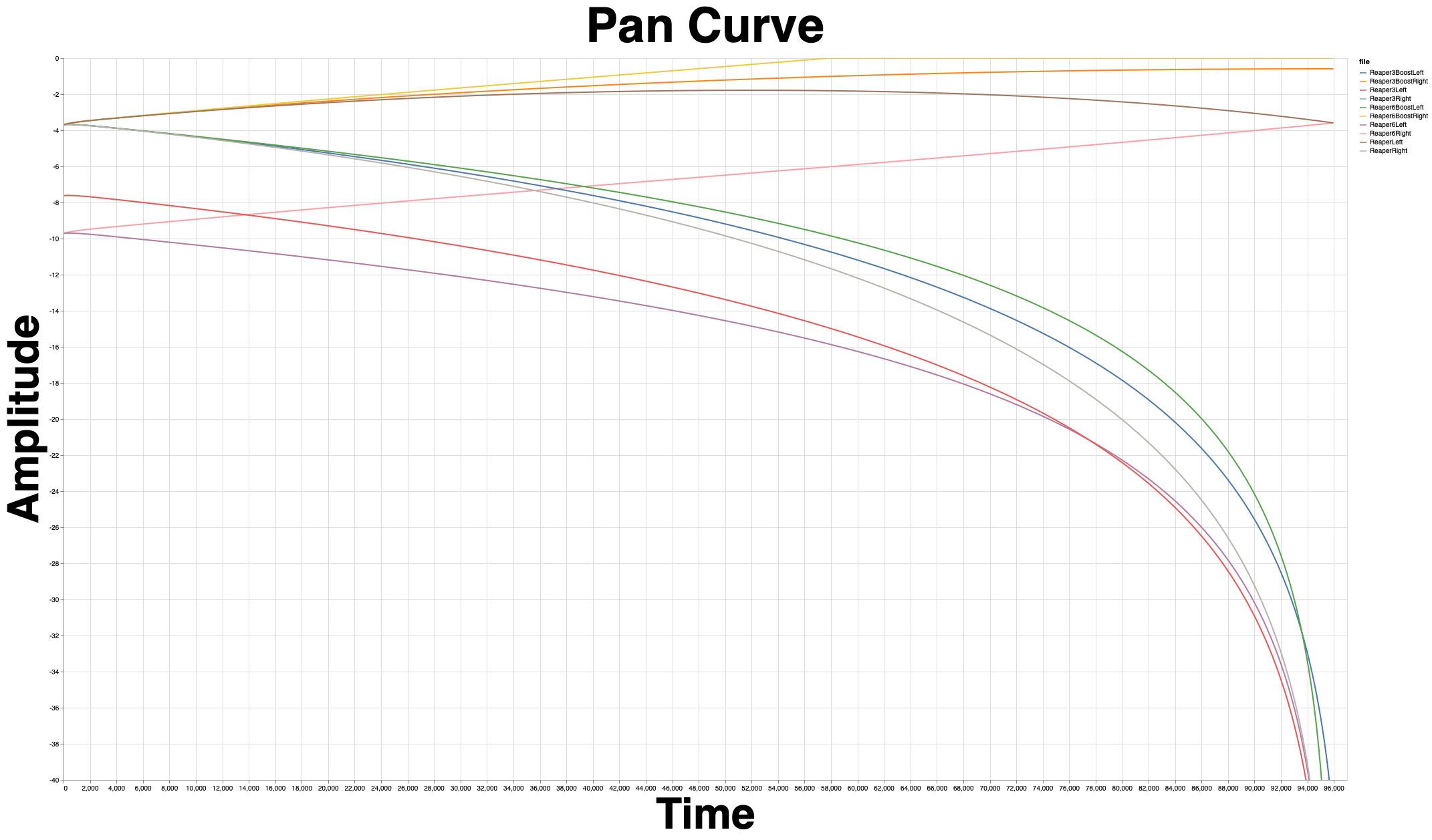 Today I’m taking a break from the automation sub-series (which still has life in it) to explore one of the more well-known parts of “DAWs sound different”.

This article is about a close cousin of the ubiquitously discussed “Pan Law”. Hop on through to see some explanations and hard data.

Text article has more information, but the video is faster and probably more fun.

FUNNY - I actually got bit by the difference between Logic Pro X default pan law and Final Cut Pro pan law. My first upload of this video was 3dB clipped. My first time using the two softwares together, and what an appropriate problem to have.

FUNNY 2 - It’s not clipping in FCPX at all, but it does clip in a few places on youtube despite meeting their level requirements. Ugh.

Pan Law is one of the first things that you see discussed when the topic of variance in DAW output is tortured to death on a forum.

It’s important to realize that pan law does not apply (unless the DAW allows it) to signals where the input stream matches the output stream. Stereo channels are not normally affected by pan law for stereo outputs.

Let’s break it down further, in stereo.

A stereo signal is two independent sources. A stereo signal doesn’t have a “center” channel. What we hear as “the center” is a creation of our mind when the information received from the right and left sources are (near-)identical.

This presents a problem. Each independent source has a maximum level. Let’s assume that level is some arbitrary measurement of 10dB. The left channel can not exceed that, nor can the right. Assuming we have a signal that’s identical in both sources, they will combine to create a signal that’s >10dB. Energy + Energy = More Energy. Duh, right?

What’s seems simple is rarely so. Combining signals inside a machine is easy to do perfectly, and that would result in a “Center” channel of 16dB (arbitrary ultra-phantom units). Combining signals in the atmosphere isn’t as simple, and the atmosphere is where the sound coming from your speakers is combined. The left and right signals don’t combine perfectly for a variety of reasons:

So if they don’t combine perfectly for that 6dB boost, then what happens? Is it 1db total? 3dB? 4.5dB?

The answer is yes. Different parts of the spectrum (different frequencies) are susceptible more or less to each of the variances. Depending on your space low frequencies might combine for 4dB, and higher frequencies for 3.5dB. Generally correlation favours lower frequencies, but it is not a linear relationship in your average scenario.

Then we make a compromise that might sound OK for the widest variety of audiences. Best of luck my friend.

Reaper has some... weird panning options (Click for larger image)

Now we, as audio system architects, are presented with a choice. We want a sound being panned from sound to side to have a consistent level.

There are two obvious solutions:

We already have to decide how much to compensate, and now we also have to consider how to execute the compensation (OFF WITH ITS HEAD!).

How do we scale between “Center” and right or left? That’s up to choice. It can be scaled linearly, log, S-shaped or whatever you want.

There’s yet another level of complexity with your (Mr/s. DAW Designer) decision. Your choice of pan law style (decreasing, or increase) need not be a singular choice. You could decrease the center a bit, but also increase the sides as the signal begins to lean that way.

Yet another concern is that if you don’t have a reduction ‘at center’, then boosted pan laws can make the signal exceed 0dBFS by using the pan control. Clipping because you panned? Surely nobody would do this…

Yikes. Lots of decisions to make, and some of them yield a similar sound, but at different output levels at different positions. 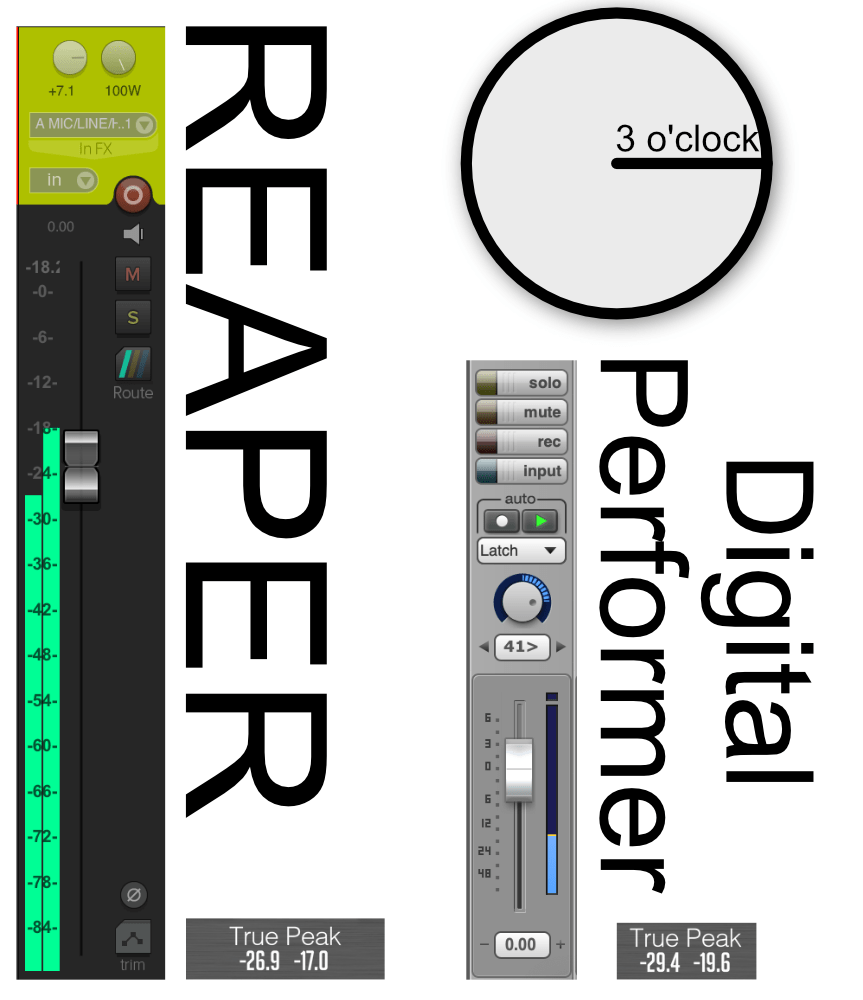 Controls matter. No matter how hard we try as musicians, producers and engineers, we mix with our eyes to some extent. You decide that you would like to pan a source “a little bit to the right” so you move the control to 2 o-clock.

Unfortunately, that means something different in every DAW. When you get to the results below, look at the 48,000 samples location and note what the level is relative to the starting level. “50%” is a different value in nearly every product!

We use interfaces, and even if absolute values may produce identical results, varying interactions will yield varied results. The interface matters! 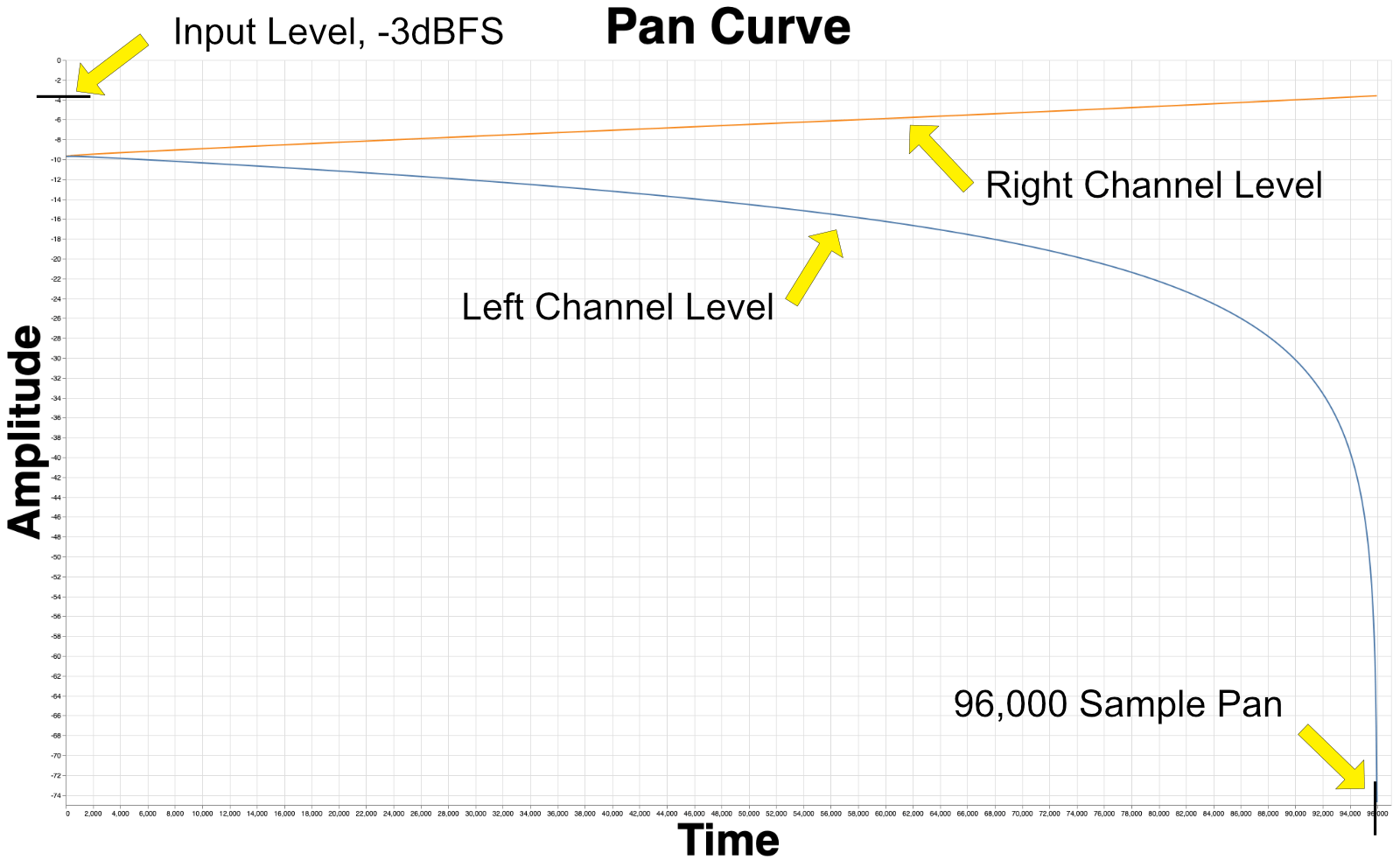 We’re the end user now. Time to figure out what these products are doing, and to do that we test.

Let me explain how to read these tests.

IMPORTANT - I’m not absolutely certain I did these tests correctly. Almost no DAWs seem to do what they imply that they should do. I am not certain that my tests are correct, or if the DAWs are simply bugged/poorly documented.

Due to Ardour’s open-sourceness, I am fairly certain that my tests are correct. My tests correlate directly with the code that’s publicly available.

Here’s how the code works to generate these charts:

NOTE Some DAWs (bad!) filter DC, otherwise using a DC signal would be a good solution.

All of these tests are using the DEFAULT settings.

Some DAWs have a variety of pan law settings, and I’d go nuts trying to show all the variations available.

If you wish to inspect the results yourself, then download the data, open one of the json files in the zip and paste its contents in the live Vega Editor. That will allow you to inspect absolute values and massage the data a bit if you wish. 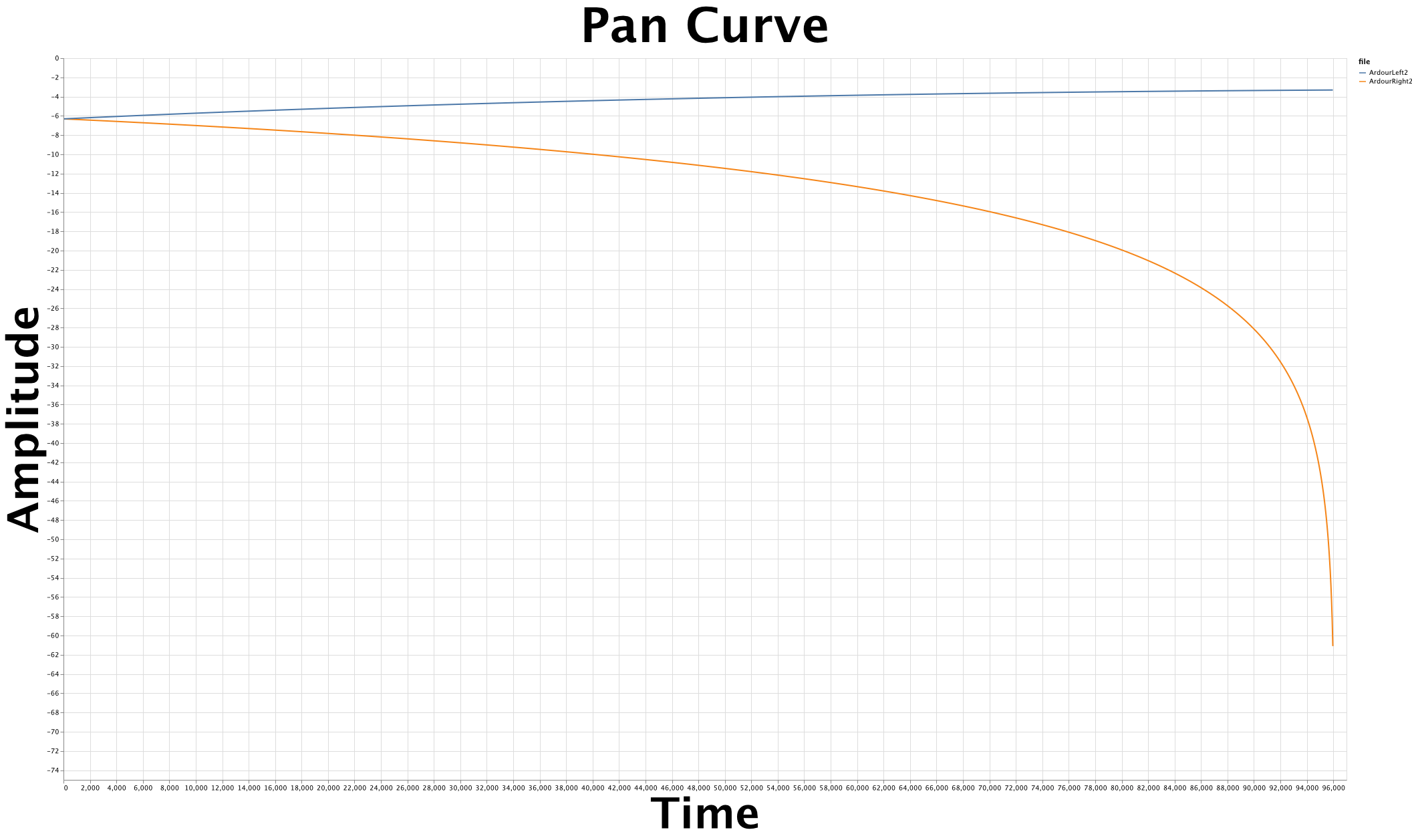 EDIT: I previous made an error. There’s a bug in Ardour 5.12 where automation plays buffered in touch mode. All other DAWs were tested in play/read mode. I have updated the image above with files ArdourLeft2 and ArdourRight2.

data.zip has been updated as well. 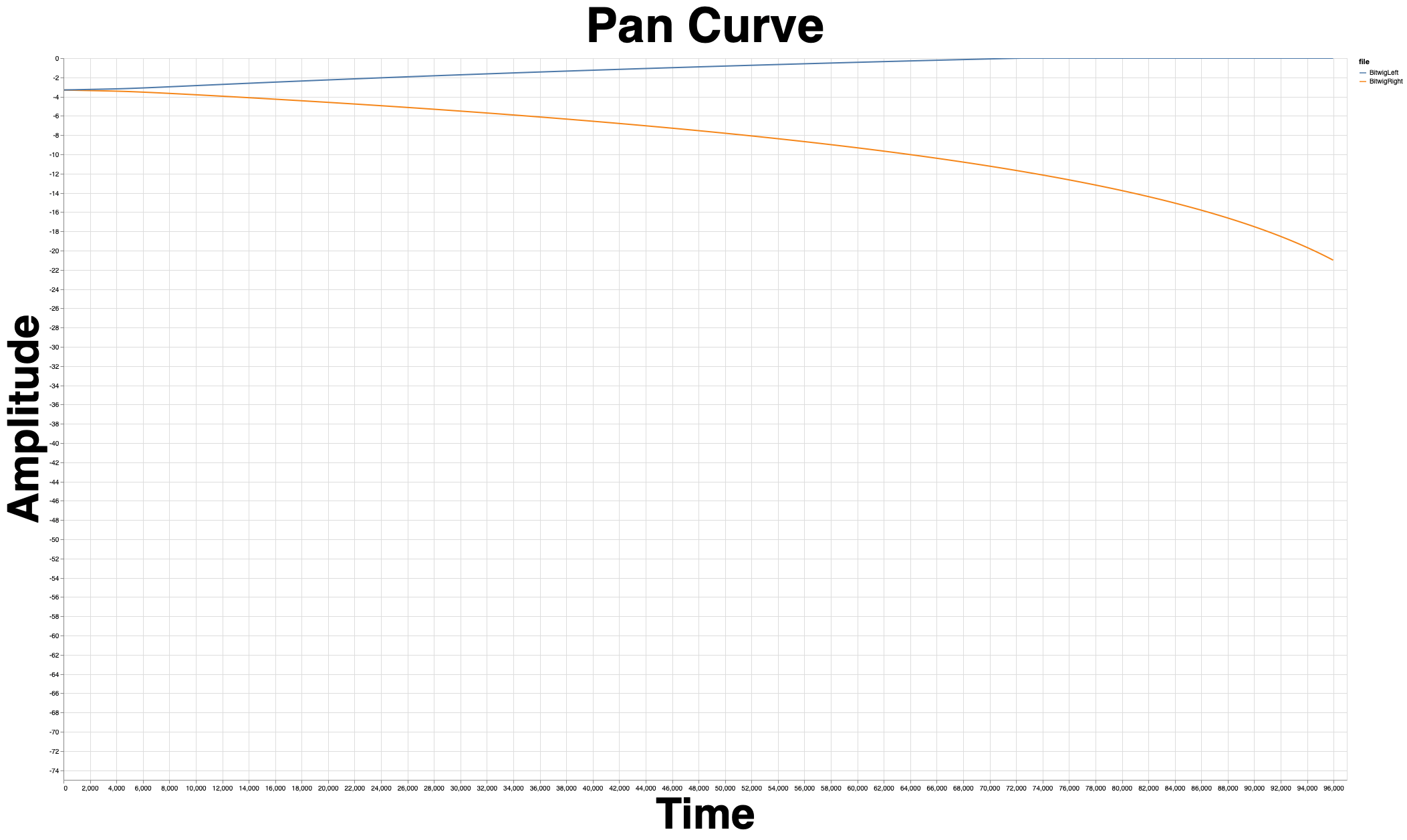 The opposing side is over compensated. In the graph you can see that it clips early. Try it with a -3dB mono sine wave yourself, if you hard pan to a side then the opposing side begins to clip quickly.

Bitwig compensates the sides by 4.2dB. Your signal can be boosted by 4.2dB by panning.

The automation is incorrect. I placed the point at exactly 96,000 samples (bar 2 at 120bpm at 48khz), however the fade did not complete till after.

This is the worst of the behaviours I saw. 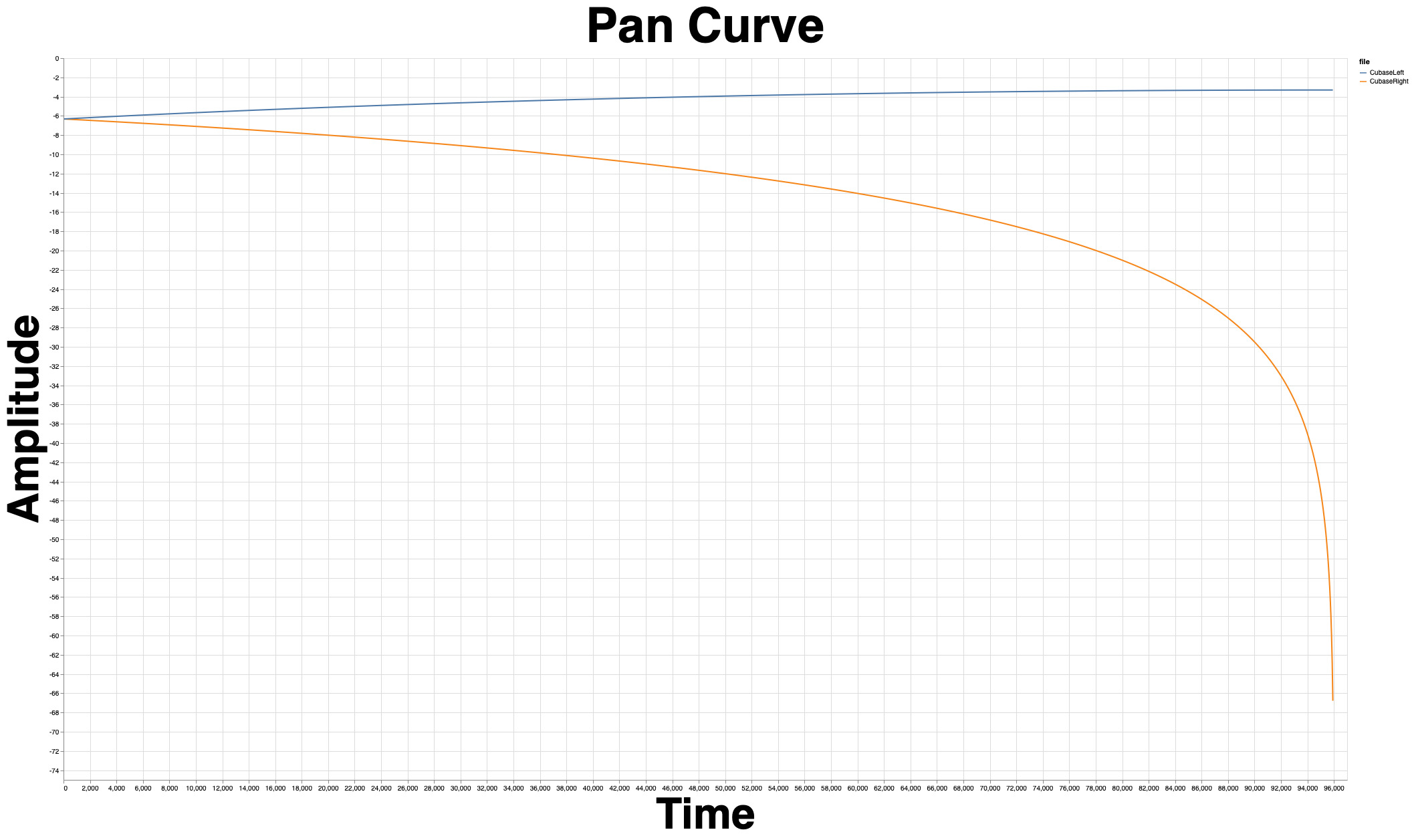 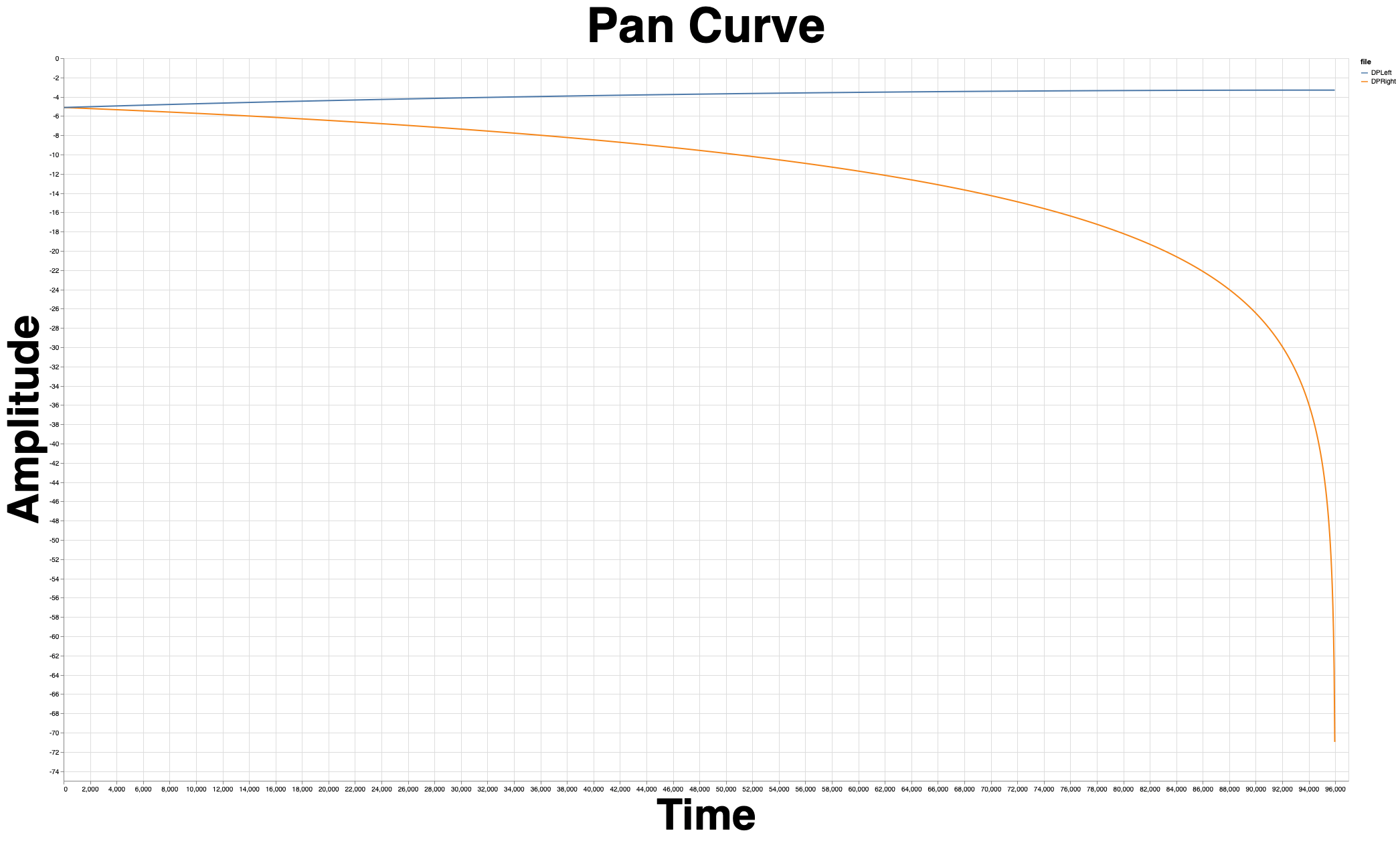 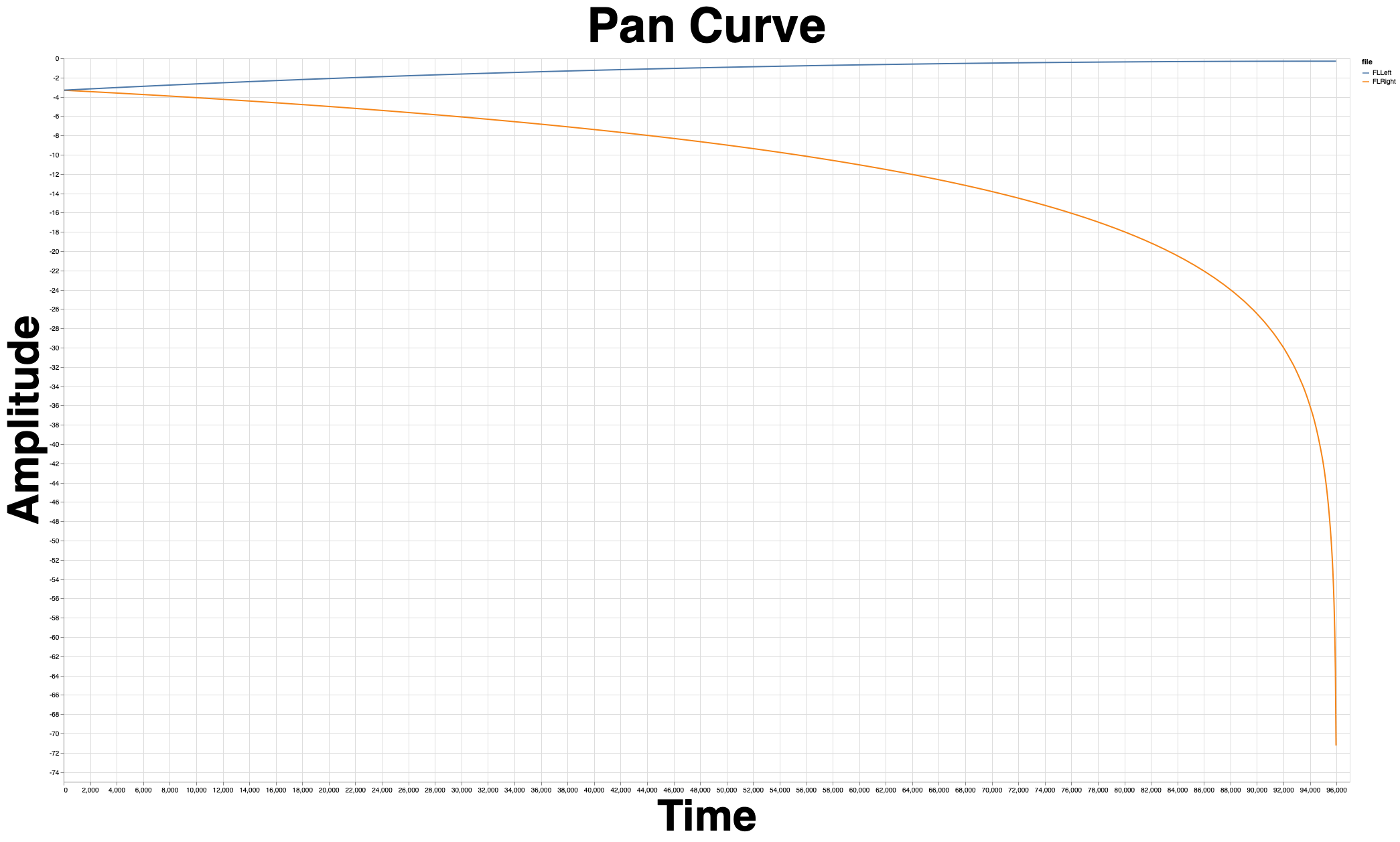 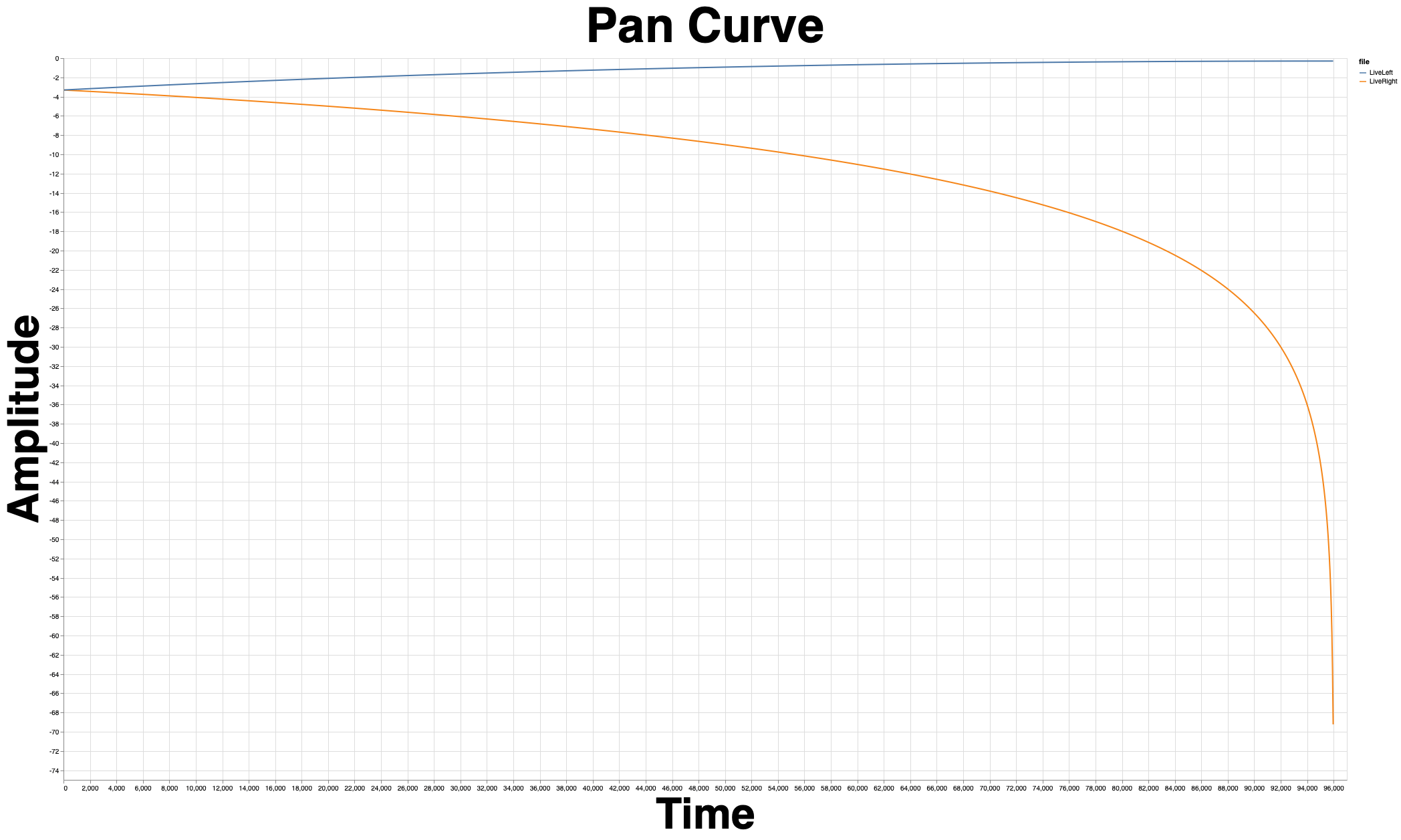 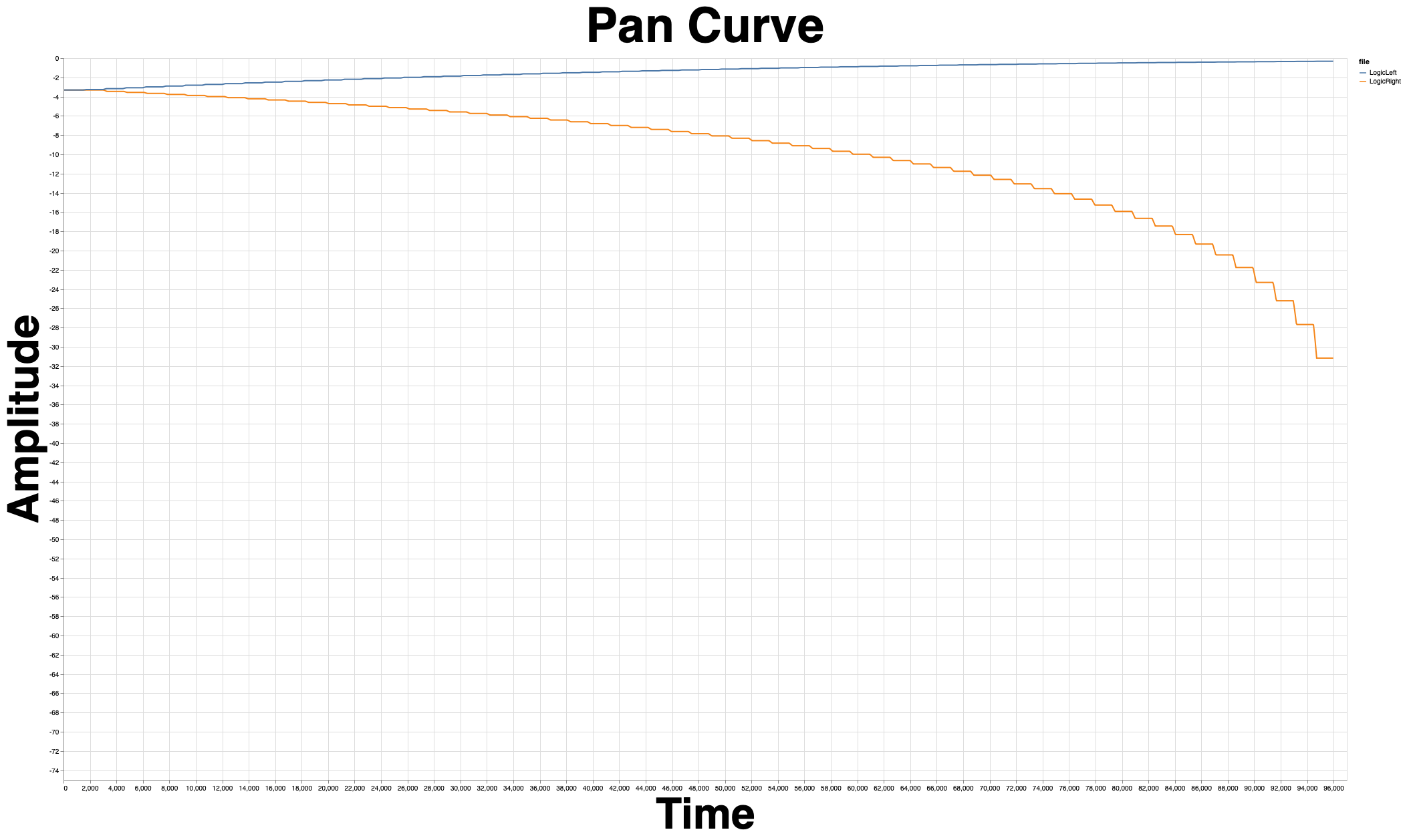 Logic’s Automation also rears its ugly head again with poor interpolation and late modulation. I had all “Sample Accurate” settings turned on for this test. 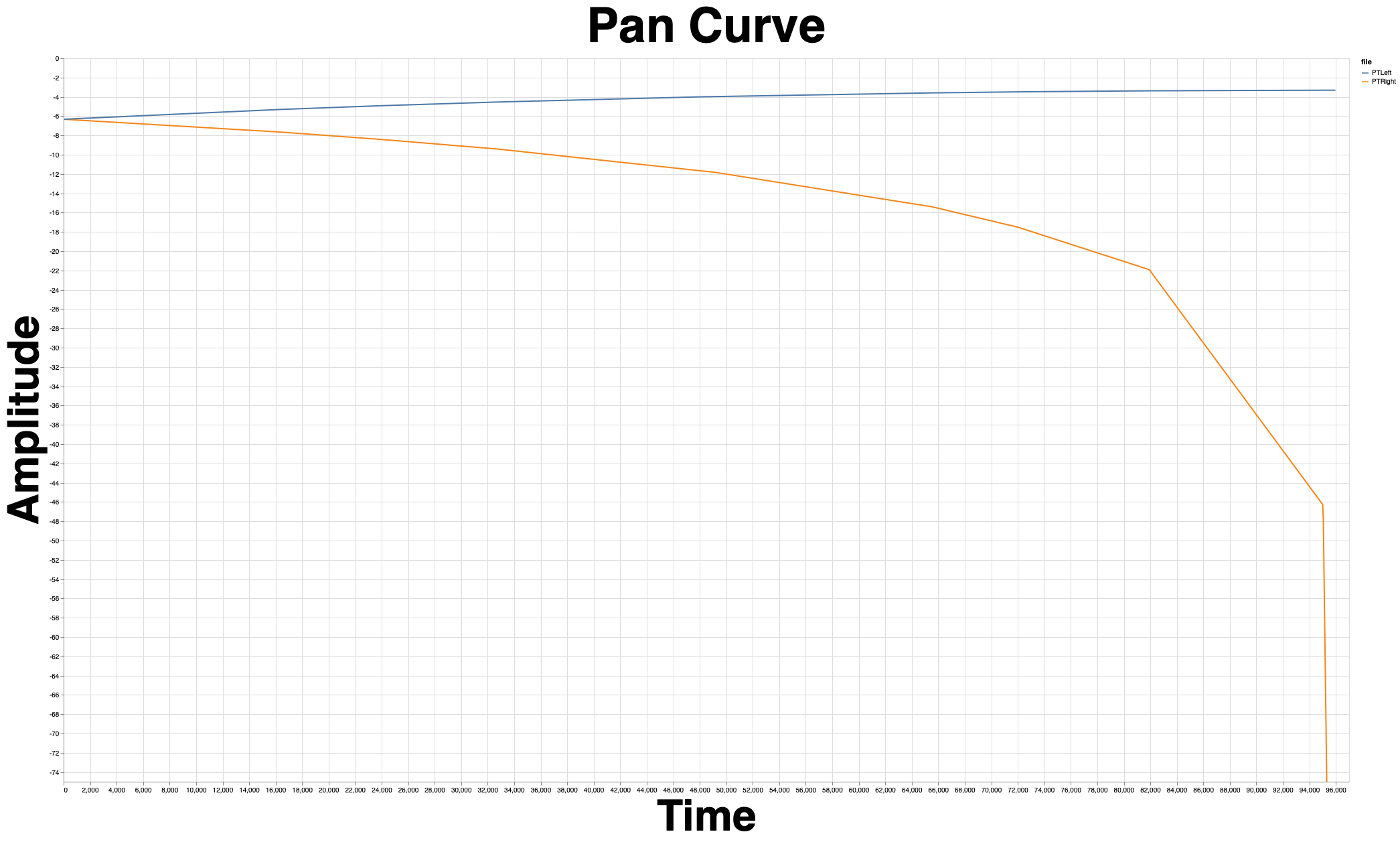 That sharp drop appears to be an artifact of Pro Tool’s automation. The scale of the area where you draw the automation is not linear, so a ‘straight line’ ends up with this curve. 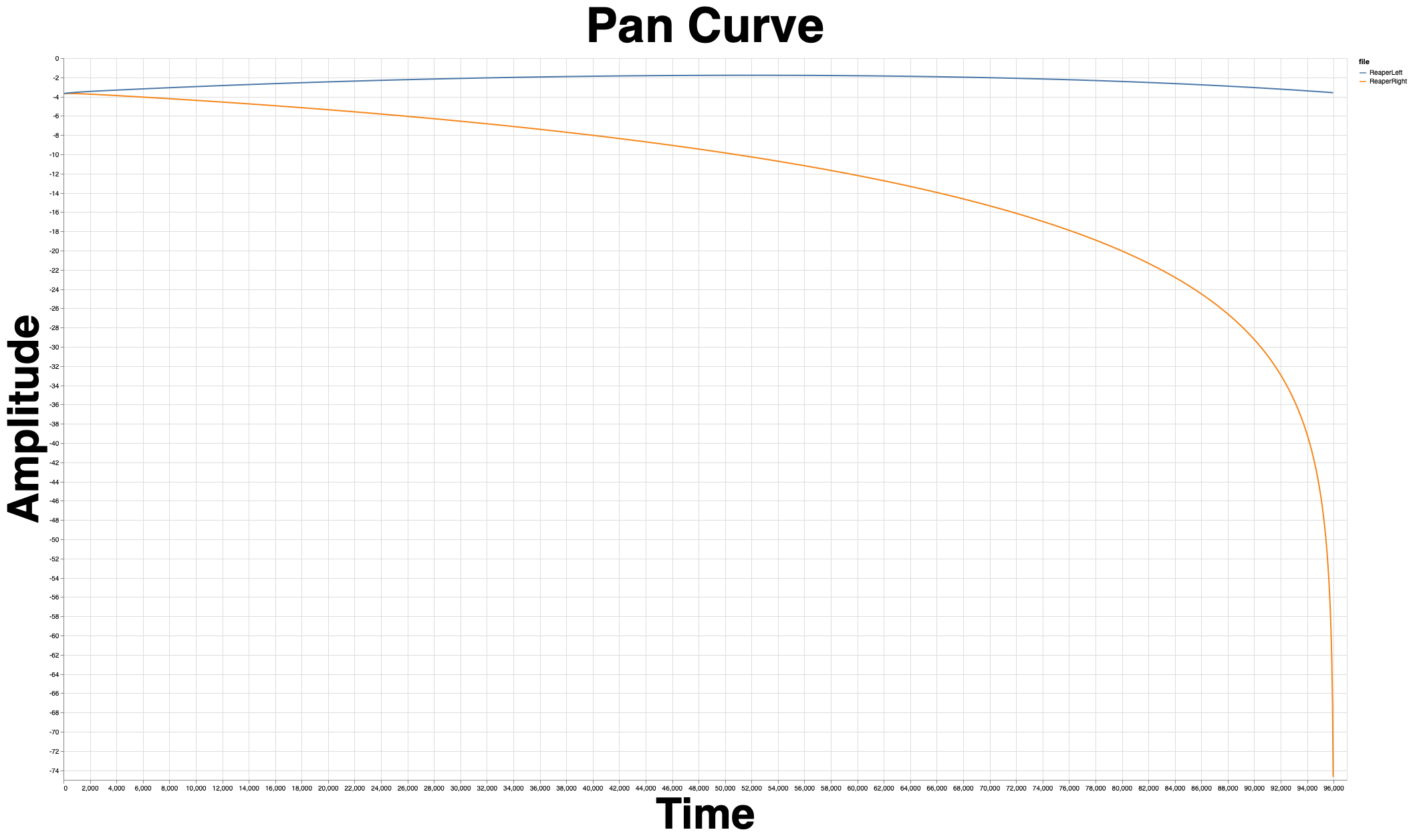 Reaper’s default curve is unique. 0db change at center, but it rises about +2dB partially through the sweep then back down to 0dB change at the end.

Quite oddly this means that you could (assuming a >2dbFS peaking signal) potentially cause digital clipping at ~50% pan, but not at 100% pan. 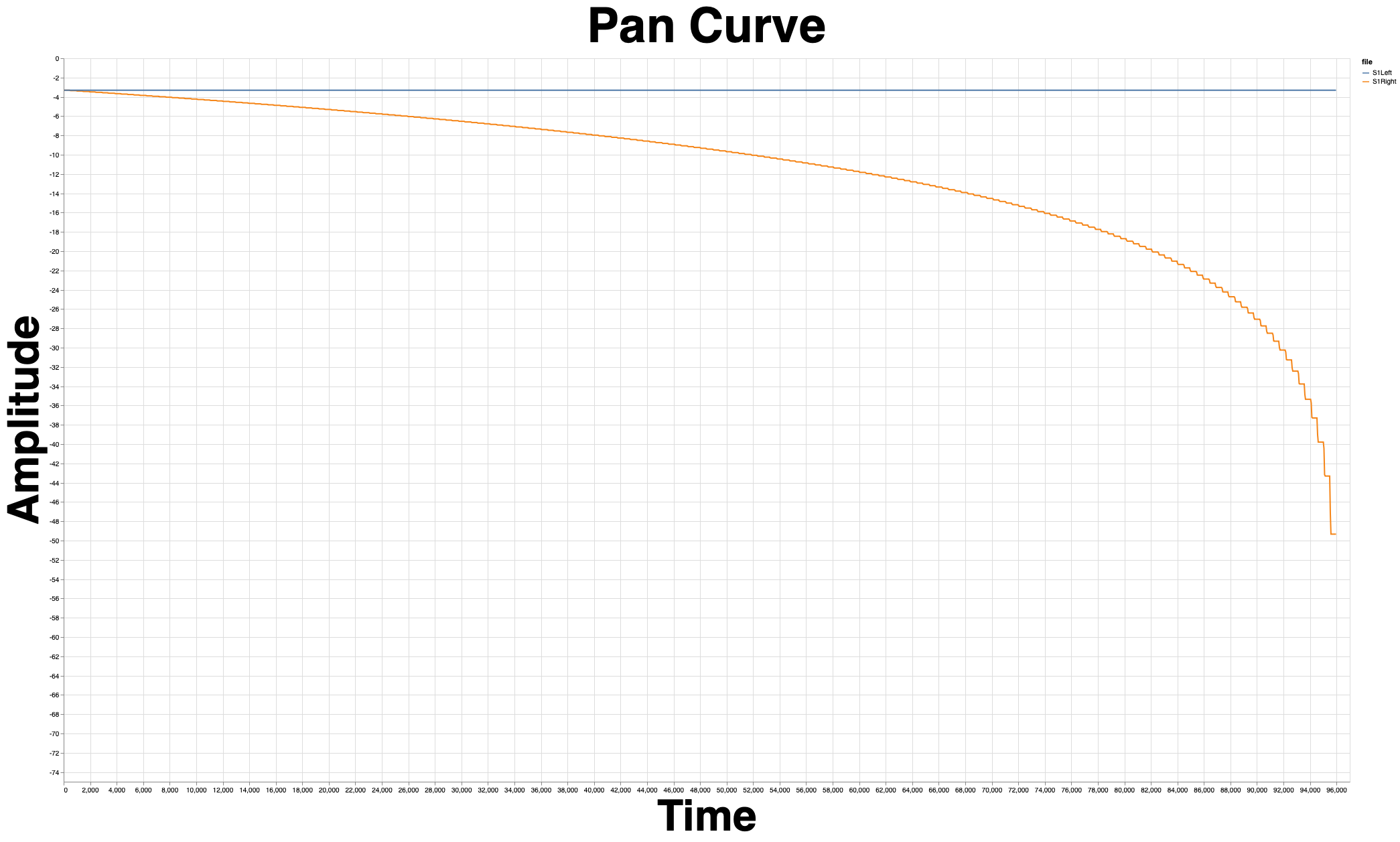 0dB change at center. No compensation on opposing channel. This is “console-like”, but it’s generally considered to be the least consistent sounding of common methods.

The data I have is there. Don’t trust it. Try it yourself!

Ideally the default state of the system, “mono” signals panned to the center, would be untouched. This state would mean that pan law would need to boost as the sides are approached. I call this ‘ideal’ because untouched signals are untouched, and the signal is only changed when the user inputs a change (panning).

Unfortunately, we users are often in a rush, unaware or just plain stupid. If the peak of the signal is within the boost margin, we can cause clipping by panning. Practically, not boosting allows the user to operate the pan control without suffering potential negative consequences.

I believe that the design decision should favour common use in scenarios where the idealistic solution is only slightly better. I consider boosted pans to be a poor design.

It’s your choice though. As long as you are informed, you can make good decisions.

This post took 28 hours to research, write and edit.