In this penultimate post regarding Mixbus, I’m going to cover some of the more useful or unique features of Audio editing.

Mixbus covers most of the basic editing functions that you’d expect in a DAW. Here I’m going to cover the more useful or unusual features.

Probably one of the most important features for audio editing is the ability to easily zoom in, out and around a project quickly.

Mixbus supports 3 zooming features that I feel are critical to editing:

Common zoom features like zoom in/out are available, however these 3 functions listed I feel are the core to efficient audio editing. Having done probably millions of edits myself (working on large multitracked drum sample libraries) and watched other very taleneted audio editor work, I feel fairly confident in this claim. 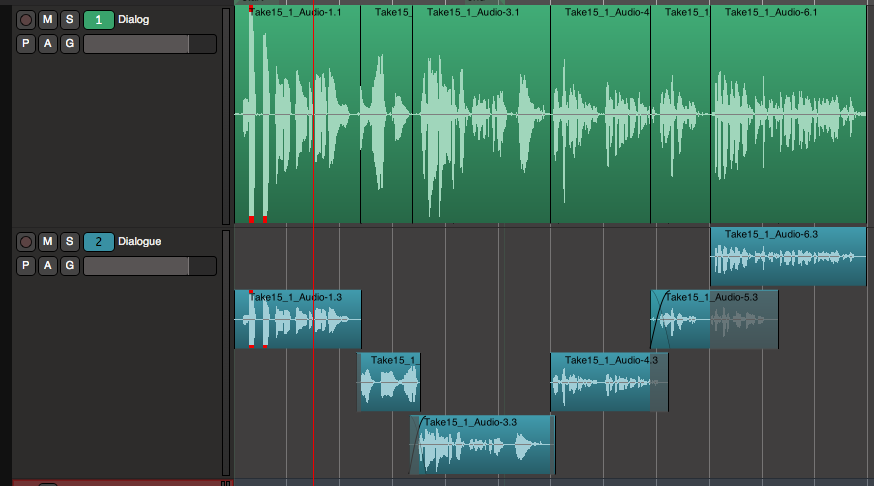 When you have overlapping regions in other DAWs, it can be a pain to get crossfades and edits just right because the z-order (layer order) of the regions requires a lot of fussing.

In Mixbus you can right-click a track go to “Layers” and selected “Stacked” to use the stacked editing mode. This puts all of your regions in a multi-layer view where the top region has playback priority.

Adjusting the layering of parts is significantly easier, which is particularly helpful when working with things like dialogue and classical music editing.

This stacked editing mode is fairly rare in DAWs and much easier than constantly pressing a shortcut or accessing a menu to adjust z-order.

Many DAWs have ripple editing, but some still don’t, so this is certainly a feature worth highlighting.

Aligning regions is a very common editing action. Often when editing you need to align the data inside a region with the data inside another region. With DAWs that have opaque regions this is more trial and error than should be necessary.

Mixbus has a feature that causes a dragged region to become translucent so that you can see both the contents of the dragged region and the region below it. This makes editing overdubs a breeze, along with the following feature.

Regions can also be made transparent at will, which allows the transparent region to be ‘audibly transparent’ at the point of the overlap. (option is under the “gain” menu in 4.2 for some reason). 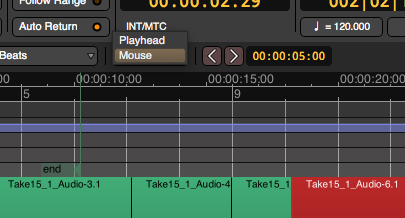 Pressing a shortcut to act on the current edit point is another key element in fast editing, but what is an edit point?

The mouse or the playhead can be the edit point in Mixbus. The mouse is obvious, but with the non-obvious benefit of not having to click to activate a command. You simply position your cursor and press the corresponding shortcut for an edit point based action.

The playhead mode allows you to take advantage of a number of ways of moving the playhead. Playhead to mouse, Playhead to mark, Playhead to Next Grid, Playhead to next Region Boundary, Move to Next Transient, etc… and many variations. A fluent use of these playhead movement commands allows the users to edit very quickly without the ‘point and search’ mouse-based workflow.

If you’ve ever watched a world-class editor in a nashville editing suite (Pro Tools, usually in Keyboard Focus Mode), then you know how incredibly useful this workflow is.

If you haven’t, then just imagine tippity-tapping on your keyboard as if you’re writing a letter to someone, except each key press represents an editing action or an edit-point movement. Yes, some people can work that fast, and Mixbus’s editing capabilities support that.

Editing multiple tracks at the same time is vital if you work with any sort of multitracked instruments. Most DAWs allow this, but Mixbus has a unique way of creating and managing edit groups.

There’s a sidebar on the left of the editor (and on top of the mixer) where you can simple click and drag to create a new group. Turning the group on or off is done by simply clicking that bar.

I think this is a major improvement over other group management systems in other products, however it does not currently support nested groups which is a shame.

I also discussed groups in Mixbus earlier. Check that out too. 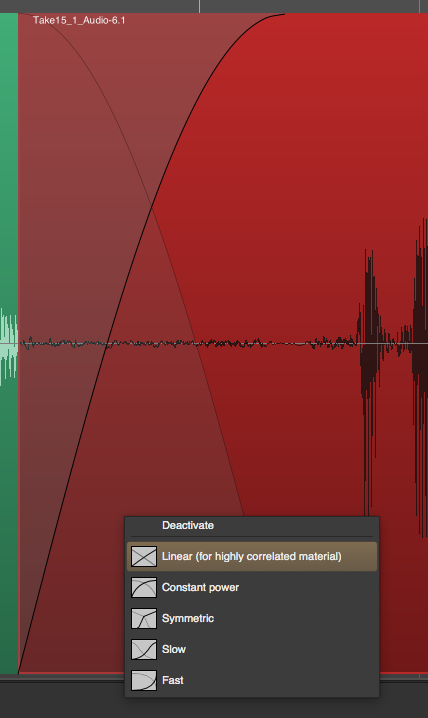 Mixbus has fades and crossfades like any DAW, however it does make using fades a bit easier than most.

There’s 5 quick fade types (Linear, Constant Power, Symmetric, Slow, Fast), but no fade editor. Rarely is that an issue except on very long fades that are probably better written as automation, or in combination with automation.

There’s edit point based commands for setting fade-in/out or creating fades based on time selections, which is fantastic.

Mixbus certainly does not have the powerhouse suite of fade tools present in some other DAWs, but the simplicity and ease of access to the tools it has are excellent.

I also did not measure any distortions or noise present during the fades, which is still an issue in some DAWs in 2017. 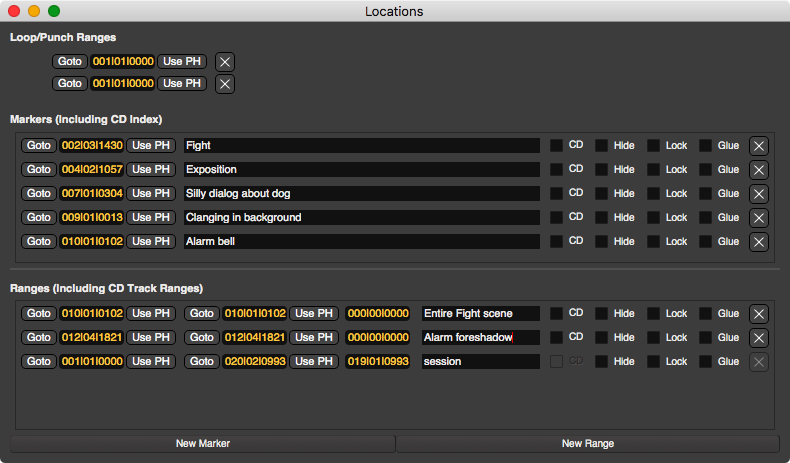 Managing markers is nothing new in the DAW world. While Mixbus’s locations window isn’t the fanciest, it does get the job done mostly.

I am not mentioning this because it’s a particularly good implementation of this feature, however with the various edit point and range based editing commands, utilizing markers and ranges in Mixbus is the key to a great editing experience.

Regions and markers are also utilized in Mixbus’s export function, so this once again becomes a useful window to become familiar with.

Rhythm Ferret is a tool that allows you to split regions at specific points.

Rhythm Ferret is extremely useful for splitting up regions for faster editing using some of the edit mode based command already mentioned.

There’s a lot of ways Rhythm Ferret can detect what is to be split, so I suggest checking out the Ardour manual on the subject to further education yourself.

I covered automatic range editing already, but I’m going to mention it here.

This feature allows you to quickly make edits to the volume of portions of regions very quickly without fussing with automation. This data also works before automation as well.

I haven’t covered everything there is to audio editing in Mixbus, but instead just the things I particularly find nice.

For basic editing, which is probably 95% of what the average user does and 99% of what the advanced user does, Mixbus offers a very nice selection of tools combined with a fantastic shortcut based workflow. The animations for editing actions are also very smooth, which is very noticable.

There are advanced things missing like audio warping, inline pitch editing, spectral editing, fill gaps and other fancy things that other DAWs are popping up with. Most users will get by just fine without these bonuses though.

Personally I really do miss audio warping, especially multitrack audio warping. I also am not very happy with Rhythm Ferret at all as a near-substitute. That is a major workflow killer for me.

This post took 4 hours to research, photograph, write and edit. If you appreciate the information presented then please consider joining patreon or donating!